It has been a slowturn-about and rapid ascent for a politician whoon more than one occasion clung to what appeared to be the last shredsof his political career.

"When (James) Treffinger went down, it looked bleak,"admittted the former chief of staff to the fallen Essex County executive. "2001 redistricting was bleak."

Elected to local government office inCedar Grove at 25, the pugnacious political animal spent a career toilingas the dedicated minority in the engine room of the Democratic Party behemoth here in Essex, learning for the sake of survivalhow to nurture close tiesto the other side even ashe proudly hanged framed portraits of Ronald Reagan and Sean Hannity in his law office.

He'd show up at an event in the North Ward,the guest of North Ward Democratic leader Steve Adubato. He had his friends there. There were high fives, for example, from Essex County Executive Joe DiVincenzo. But those Democrats not among Adubato's inner circle looked on O'Toole as an interloper, a castaway from the other party treadinginto enemyterritory.

"A snake," one Democrat whispered through gritted teeth, pointing at O'Toole at a ribbon cutting at the Robert Treat Academy.

Adubato liked him, kept him close; in conversation built him up as a force to be reckoned with in the other party, gave him the microphone to offer the Republicanrebuttal at his various and theatrical events. Anyone who thoughtO'Toole would go easy on them were eviscerated with wit. At the Breakers in Belmar, Maggie Moran and O'Toole went at it with the one liners. People laughed, but also kept their heads down, lest they be picked out of the crowd and impaled.

"They're going to say I'm Adubato," O'Toole said when he went to the senate. "I don't care."

That was two years ago.

Last Tuesday's win by Christie, a Republican who grew up just down Pleasant ValleyWay in Livingston, another Essex County outcast of sorts by virtue of party designation,permitted O'Toole, whoappears constantly in a state of political agitation, to wear at last – very briefly – a look of contentment.

"Chris Christie was the candidate of great destiny,"the state senatorsaid of the former U.S. Attorney who last week defeated Gov. Jon Corzine by a 49-45% margin. "He knew from the beginning where he had to go. You heard the critics. He was not conservative enough in the primary, or he was too conservative in the general. Until you're a candidate, you don't know the pressure. He's the most sincere and genuine candidate I've ever met.

"I've been friends with Chris for a long time,"added the chair of the Essex County Republican Committee and statewide chairman of the Republican Party county chairs. "I tried to get Chris Christie to be our candidate in 2005. I met with (then-Republican National Committee Chairman) Ken Mehlman but it didn't come together. This time it did."

In the legislature, he and the ascendant Sweeney nurtured a relationship on the Budget Committee.

In addition to their mutual commitment to pension and budget reforms, there were natural personality convergences for the Republican lawyer from North Jersey and the South Jersey ironworkerDemocrat.

"I trust him," Sweeney told PolitickerNJ.com. "We have worked together on many issues and I have found him always to be very honest and direct. Our relationship couldn't be better. I think we both recognize that this can't continue, this situation we are in, and that it will take a partnership of both parties to fix this state. Kevin's a very good conduit."

One town removed from sitting Senate President Richard Codey (D-Roseland), O'Toole converselyfingered Codey as the redistricting mastermind behind the 2001 reconfiguration thatshovedO'Toole into a Bergen and Passaic-heavy district.

"Brilliant," O'Toole said of his rival.

Whenthe Republicanbeat the odds and won the District 40 senate seat in 2007 toland in the upper house with an invigorated class of nine Republicans, including state Sen. Bill Baroni (R-Hamilton), Sen. Jennifer Beck (R-Red Bank), Sen. Sean Kean (R-Wall), and Sen. Steve Oroho (R-Franklin), he promptly set about underming Codey, his old nemesis – "If we get beaten, at least we won't be carried out of here in body bags after four decades, we'll go down fighting" – and keeping close to Sweeney.

"Dick Codey has served the state for a very long time," said O'Toole. "There should be limits in terms of leadership. Longevity in this business gets the best of you. I'm not one to judge Dick Codey. I'll let the members of his caucus do that. I live one town away. I'm baffled that there was no reach-out. He's been at this game for 35 years. He should know better."

As Sweeney threatened through the summer and fall to dismantle a Democratic Party legend, O'Tooleworked his contacts to assist in manuevering Codey out of the leadership chair.

"We were at that rare intersection where – all at once – we didn't know who was going to be the next governor, senate president and speaker," said O'Toole.

He repeatedly told his allies on the other side of the aisle – state Sen. Brian P. Stack (D-Union City), Essex County Executive Joe DiVincenzo andNewark Mayor Cory Booker – that Christie was going to win, that Corzine was finished. Simultaneously he worked Stack on the senate presidency front, helping to convince thepowerful North Hudson County politician to back Sweeney over Codey.

When Sweeney announced he had the 14 votes to dislodge Codey, followed a few short weeks laterby Christe's defeat of Corzine, O'Toole savored back-to-back wins and his intensified status as liaison man.

"I raised close to $400,000 for those organizations," he said of the Republicans in those two counties. "No one raised more than me."

Despite Christie's inability to crack 50% and incumbent Corzine's failurein poll after campaign poll to break 41% in his approvals, O'Tooleinsists Christie ran an excellent campaign and connected with voters as an authentic New Jersey product where Corzine could not.

"I think the Corzine campaign made a huge mistake by attacking the U.S. Attorney's Office, becasue it was a contradiction from what they had been saying all along – before Chris Christie was a candidate," said O'Toole. "They were saying all along what a great job he had done, and then, once he was a candidate, suddenly he had politicized the office.Come on. Everyone knew this was an extraordinary professional."

There will be fights with the Democrats. Argue the justness of a millionaire's tax, for example,and O'Toole drops the "s" word – "Socialism."

But all is cordial early, as Christie continues, day after day, to call and connect with key Democrats.

"There have been a lot of mistakes over the years," said Sweeney. "Everyone's expecting us to get in this battle with Chris. I've met with Chris – yesterday. We had a very good meeting, a very good conversation. He's showing mehe wants to accomplish some things. People will be surprised by how well we work together.You're going to see an honest effort to work together. It was nice to pick up the phone and speak with him. Democrats in the legislature are ready to work with this governor."

Like many others, a day after the election,O'Toole watched Christiestride into the Robert Treat Academy in Newark on NJN News.

There was Adubato next to Christie.

"Steve's a friend,"O'Toole said. "Steve and I have had some terrific battles, but understand, this is a man who takes welfare mothers off welfare and gives them training and jobs, who takes underprivileged kids and gives them a top notch education at a fraction of what it would cost otherwise. You can hate Steve and his politics but love what he does – whichis built on essentially Republican principles."

Some Democrats, by turns baffled or outraged,objected to Adubato's embrace ofthe triumphant Republicanonthe day after election, while O'Toole, having been there many times and at times alone,the lone Republican, watched with a sense of fraternity and pride. 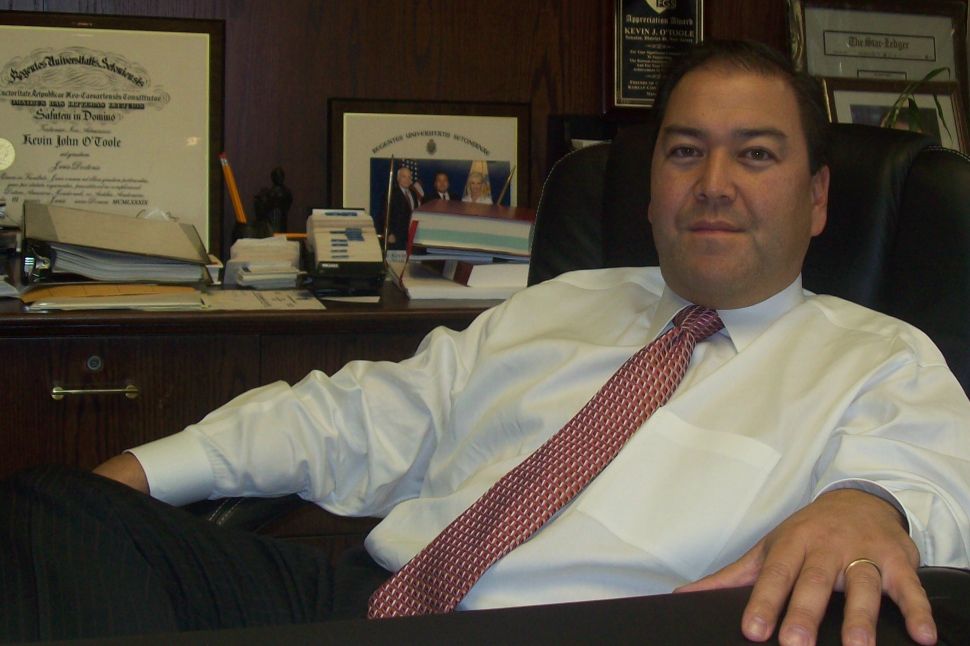