One of the last senators to announce publicly that he would support Senate Majority Leader Steve Sweeney (D-West Deptford) for leadership over Senate President Richard Codey (D-Roseland), state Sen. Nicholas Scutari (D-Linden) today said he intends to stick with Sweeney.

"That's not the first time I have heard that, but I don't think it changes my thinking," Scutari said to an argument made by East Orange Mayor Robert Bowser that Democrats should remain with the veteran Codey as senate president to ensure the toughest top legislative negotiator inthe coming era of Republican Gov. Chris Christie.

"I certainly don't think Steve Sweeney is a poor negotiator and I believe he would do a fine job," Scutari explained. "Senator Codey would do a great job – and has. But with the new governor coming in I think there are real opportunities for change. Senator Sweeney hasbeen astrong advocate forstabilizing our pension system andhe will lend credence to our efforts."

Scutari is in line tochair the Senate Judiciary Committee, but the senator insisted"that wasn't part of my reflection on leadership. I would be honored tochair the judiciary committee."

The Union County-based senator described Codey as "an excellent leaderwho connected with people personally and professionally in a time of need."

Looking ahead tothe reign of Gov.-elect Christie, Scutari said, "We have a real opportunity to do something for the Stateof New Jersey." The men – state senator and incoming opposition governor – met last week for the first time to consider transition, an encounter Scutari described as wholly positive.

When he was United States Attorney, Christie subpoened Scutari in the case of a Christmas Tree allocation – a subpoena that to date has gone nowhere.

"We didn't talk about that," said Scutari, who from the beginning maintained he did nothing wrong. 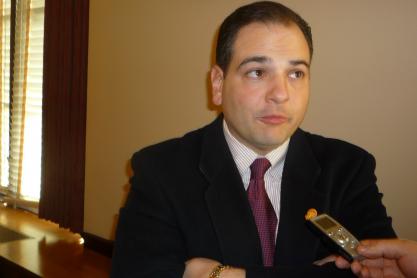