"In my senate race, my internalsshowed me down by two and Iwon by three – and it's because of this," says Sweeney, on his way into the packed Camden County DemocraticCommittee headquarters where the workers are pressing through the front doors, then the back, spilling into the rear parking lot for their massive morning GOTV rally.

"There is more of a commitment than ever from organized labor for this election," Sweeney says. "Chris Christie has made it easy for us. He drew as deep a line as you can draw and people are eager to defeat him."

The majority leader, who is poised with senate reorganization to become the senate president, said at least 1,000 workers will attend the rally, then jump on GOTV vans that will cruise to targeted locations throughout South Jersey on behalf of Gov. Jon Corzine and his allies.

"This is something the Republicans don't have," he says. "A ground game."

Sweeney confirms that he had a sit-down meeting last week with his rival for the senate presidency, Senate President Richard Codey (D-Roseland), but denied that Codey told him he was conceding their leadership contest.

"I speak to the senate president on a regular basis, and it had nothing to do with that," Sweeney says. "I respect and like Dick Codey."

Inside, the room contains t-shirted and sweat-shirted soldiers packed shoulder to shoulder, moving with shuffle steps at the sound of labor leader (and Assembly candidate) Donald Norcross' microphone-enhanced words -"coffee and donuts out back."

Sweeney jumps onstage in front of a parking lot crammed with bodies and clad in the colors ofmany unions.

"He doesn't like us," Sweeney shouts, referring to GOP gubernatorial opponent Chris Christie.

"That's because he never worked," a voice cries.

"If someone came up to you and punched you in the mouth, would you vote for him?" Sweeney asks. 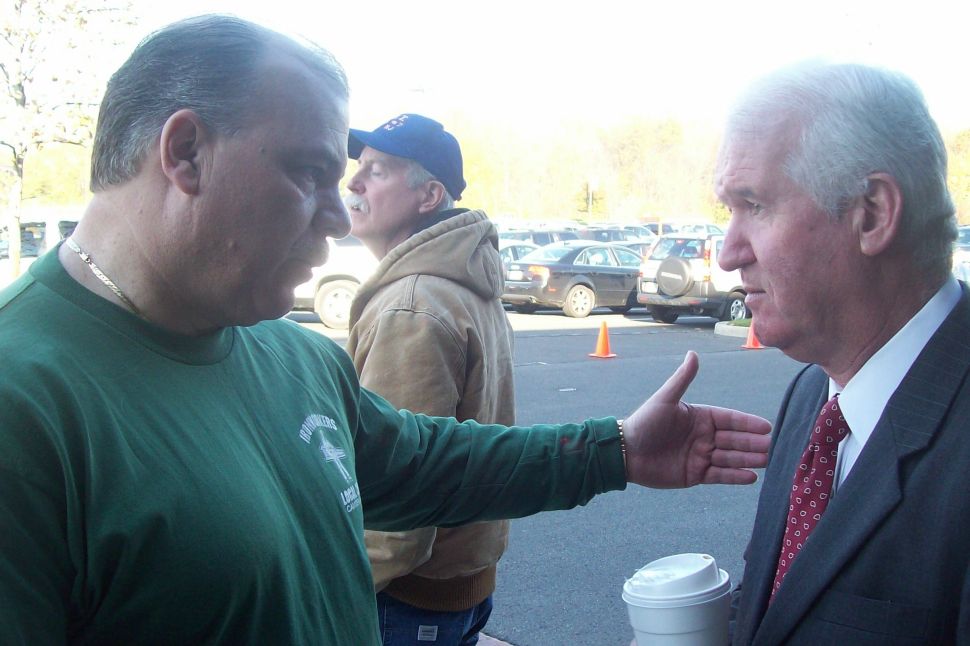