That's what U.S. Rep. Donald Payne (D-Newark) told a group of black activists and Payne allies at a meeting of the African-AmericanPolitical Alliance here aat the United Methodist Church on Saturday.

"This race has national significance," the veteran congressman told a room packed with 100 leaders and community activists. "The Republicans would love to say a Corzine loss is a referendum on Obama. If we lose Virginia, and then lose New Jersey, you can see the headline: 'Clean sweep by GOP: Obama on the decline.' They just can't wait to write that story.

"There's no way we're going to allow that to happen, right?"

"Right," the crowd called back.

"It's essential the – and they have all these fancy names for it – the base vote comes out," said Gee.

"We were somewhere between three and four points ahead the last couple of nights," Gee said of the Corzineoperation as it vies in the closing days with the campaign of GOP challenger Chris Christie. ""I've seen other polls that showed us tied or a point behind. What that means is it comes down to what it always comes down to: 'us.'"

U.S. Rep. Payne served as South Ward Democratic Chairman from 1970 until 1990, building the organization into a political forcebig enough to launch him intoCongress.

A year later, Booker, recognizing his weakness in the South and at that time, the prospective danger ofantagonistic political relations with Adubato,on his own challenged the Paynes' political organization in a fight for district leader seats and ward control.

The Paynes thrashed Booker, reclaiming some equilibirum after the fight with the North Ward political boss.

For the Paynes, theObama outcome last year againunderlined the statewide power potential of the South Ward.

But Tuesday will be the test of whether what Obama was able to awaken in the African-American ward long politically controlled by the Paynes can project to a 40% approval rating candidate like Corzine – with the same-city sales pitch personally made by the president.

It further testswhether the Payne organization – overlaid with labor and Corzine coordination – can deliver the votes to a candidate not named Obama or Payne.

Payne thinks he has another instrument in his particular election besides Obama to help re-elect Corzine: Christie.

"Hypocrites annoy people," said the congressman, referring to the former U.S. Attorney. "They don't like people who say, 'This is the way you do it, and then do the opposite.' People know that the U.S. Attorney's Office could have gotten more significant people than they did but they announced the ones they did to assist Christie's political aspirations. They set back criminal justice because of a premature announcement. Christie's personal aggrandizement trumped the interests of the residents of New Jersey. Christie represents a dangerous, regressive trend for our state.

"They also know that Corzine is a good guy and that a good guy doesn't always make a good politician," he added. "But Corzine is not in this for personal aggrandizement, that's obvious."

Ten Four Evans, a well known community activst from the South Ward and a backer of insurgent council candidate Ras Baraka over Booker Team incumbent Councilman Oscar James of the South Ward, said as underwhelmed as she is by local Corzine allies James and Booker, she's voting for Corzine.

"You think you're in hell," she told the crowd. "He (Christie) gets elected, you will be in hell. Don't stay home and play those silly games now."

Payne announced to the crowd after a brief cellphone conversation that he would be a guest of the president on Air Force One, a declaration that received claps of appreciation, yetif the governor's race is a referendum on Obama, ulitmately what matters in that regard will happen back in the South Ward, in a domain long run by the Paynes- on the ground. 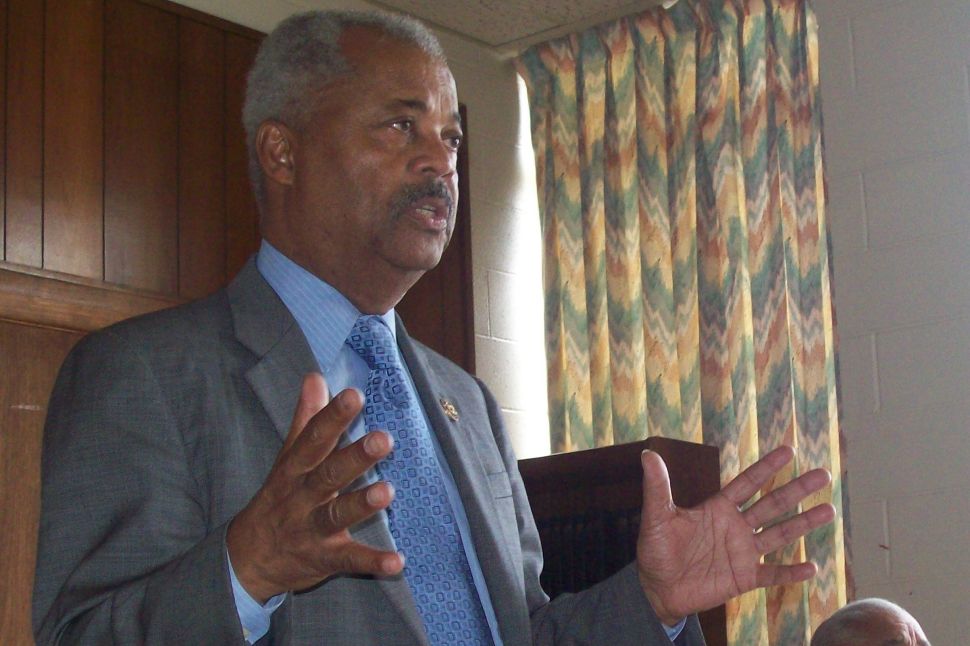