A year ago they gritted their teeth through the white and dark meat at Thanksgiving, hovered dutifully in each other’s company through Christmas cocktails, sustained by the Irish and Italian traditions blended in familial harmony even as they felt the tractor beam of a coming political campaign hauling them toward their inevitable showdown.

They figured when it was all over, regardless of who had won, they would be able to go back to the long table as – if not chummy friends – at least respectful brothers-in-law.

But Assemblyman-elect Tony Bucco, Jr. (R-Boonton Twp.) and Doug Cabana, the Morris County freeholder, couldn’t easily return to the same fold this year, skipping over Thanksgiving and Christmas, if one is permitted to read between the lines.

There were too many hurts left over from their District 25 campaign, which Bucco won after enduring a Marquis of Queensbury contest run amok, in his opinion, that resulted at its worst in his father, state Sen. Anthony Bucco (R-Boonton), spending at least one overnight visit in the hospital with chest pains.

Neither Bucco nor Cabana will talk about the fracture, which could have bigger implications than the present silence between them.

“I don’t harbor any hard feelings against Doug,” said Bucco, amid preparations for the opening of his western Morris County district office. “As far as I was concerned the day after the primary, it was over. I don’t hold any hard feelings. I saw him at a Toys for Tots drive and shook his hand and wished him a Merry Christmas.”

Cabana, whose sister is Bucco’s wife, wouldn’t comment, only to say, “This is a family matter that needs to be resolved.”

Up for re-election next year, the veteran freeholder intends to run for another four year term.

If it was north country politics that drove him and the Buccos apart, it may ironically be the next cycle of politics that forces him into a face-to-face with his Italian brethren.

That’s because Cabana may find it necessary at some point to hammer out an understanding and agreement regarding the Buccos’ intentions.

Put bluntly, do they intend to run someone against him?

To hear the younger Bucco tell it, such a scenario does not sound likely. “To sit back and harbor grudges is not the way you can progress,” said the assemblyman-elect.

But the congealed bad blood bears the markings of other Morris County rivalries, other wars.

Freeholder John Murphy, for example, the man who once derailed Gov.-elect Chris Christie to win the seat he’s now held for over a decade, is a longtime Cabana ally who injected the nepotism argument into the primary earlier this year when he endorsed his freeholder colleague over the senator’s son.

Notwithstanding moves made to protect the most basic rituals of family, a Cabana-Bucco bread-breaking might ultimately hinge on a simple, we run against you in 2010 if you don’t run against us in 2011 (when the elder Bucco is up for re-election), or some such variation.

Bucco junior said it’s all speculation at this point, and unproductive.

“In 1995, Chris (Christie) and Rick Merkt ran a campaign against my father, they outspent us 3-1, and after that race was over, people felt a divide, but from my point of view, we moved on,” said the assemblyman-elect. “Based on the conversation I had with Chris after that race, I think everybody learned a little bit. My father ended up becoming a senator, Chris lost a freeholder seat but became U.S. attorney and now governor.

“My father and I think the world of Chris.”

But what that means for Cabana and maybe Murphy carries something of the mystery of an ongoing Cabana-Bucco interchange between politics and family. 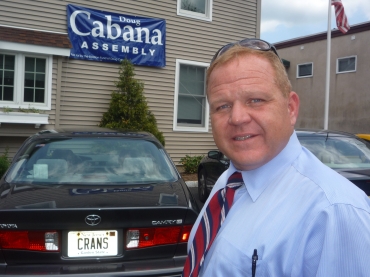