You get a high ten.

Followed by the embrace.

And that's on a day when he isn't announcing his run for mayor.

On Sunday afternoon,in the midst of a driving rainstorm threatening to turn into ice, Segura at the front end of a five month campaign in New Jersey's capital city broughthisown usualenergy level, amplified by astatewide constellation of new blood stars vigorously backing him in his 2010 mayoral run.

Positioning himself as the change candidate following the 20-year era of Mayor Doug Palmer, the widely grinning Segura, a former minor league ballplayer now in his 50's who years ago twice talked to the Cincinnati Reds,jogged into Roman Hall to the strains of the Black Eyed Peas "I Gotta' Feeling, hand clutchedand slapped his way to the head of the banquet hall and shouted, "It's good to be alive. It's beautiful to be a Trentonian!

"I've spoken with many people – good people, working people, family people, young people – and it's sad when you hear them talk about what Trenton has come to be," said the candidate, standing in front of a blown up photo of the bridge across the Delaware with the old Industrial Revolution boast visible from the floor: "Trenton makes, the world takes."

"The city's broken – big time," Segura admitted of the present."I believe we have an obligation to stand on those issues most important to the under-served and most vulnerable."

He promised as mayor to fight for schools funds, empower people's right to elect their School Board representatives, cut the influx of illegal handguns coming from Pennsylvania, buck up the city's tourism industry, refurbish the city'swaterfront with houses and recreation for the people of Trenton, and land more state dollars.

He received a bigger cheer at the end when he cried, "I ask you to join me today so we can make a change together. …Trenton needs you. Trenton needs YOU!"

The crowd went berserk as the music cranked and his allies hoisted both of the candidate's arms aloft.

Diaz grew up with Segura in Perth Amboy and described herself as the kid in a public housing project who leaned on the good-hearted then-counselor for help.

"He will fight for Trenton the same way he fought for this woman who now happens to be mayor of Perth Amboy," she said.

Unless he's at the Statehouse, the Hudson County political animal doesn't move and shake much beyond his district. Stack grew up with the political idea drilled into his head that you work your base incessantly and the rest is the province of others who must face the consequences of their own constituents.

But this was a special case.

Stack isan old friend of Segura's. He sat withthe councilman for one last gut check before Segura decided to run next year. "You've got to do this. This is the logical next next for your career."

"I consider Manny my brother,"Stack told the crowd. "I'm proud to say Manny's my brother. Not only do I like Manny, I love Manny. He doesn't see color. He doesn't see ethnic background. That's why I drovefrom 70 miles away to be here in person. There is no one better tounite this city and move it forward."

The confluence of organizations andcharacters underscored the personal and financial connectivity Segura has statewide. Continuously acclaimed by his supporters today as a big-hearted public servant, he'sstarting this campaign with $50,000 banked. Theforces in attendanceattest todeep ties forged over a number of years, which will undoubtedly prove helpful in what most observers see as a competitive field in Palmer's wake.

"I will be here to go door to door and to raise money for Manny," pledged Stack, who also promised to be a government advocate at the Statehouse.

"I'll work with Manny to bring in the kinds of funds you need," added the mayor/senator. "If the urban areas don't do well, the state fails."

Talk to the people in the room – the political types- and they know the odds. They know thispromises to be a very hard election for Segura, who needs to get 50% plus one to win.

He has citywide creds built over eight years of service as an at-large councilman – a fulltime job. But the demographics of Trenton – 52% African American, 21% Latino, 25% white – means the natural advantage lies with one of several African American prospects, including Council President Paul Pintella, Councilwoman Annette Lartigue, former Freeholder Tony Mack, and/or others.

An energized crowd of blacks, white and Latinos packed Chambersburg'sRoman Hall for Segura as the councilman repeatedly in his speech highlighted his commitment "to the future in(our) children's eyes; I will work hard for them and all Trenton residents."

Fire Battalion Chief Bill Paradiso – "It's hard to pronounce, it's Italian," by way of reminding the crowd of yet another specific ethnic group in the big, packed room, said Segura's commitment to public safety impresses him. "We recently lost a firefighter named Manny, and the first person who stepped forward was Manny," Paradiso said.

Having faces in a crowd at a rally and accompanying energized voices, and a built-inoperation reaching powerfully into all of Trenton's neighborhoods are two different things, however; and an additional and especially difficult obstacle forSegura's candidacy at the outset is the fact that of those either running or pledged to run, Segura is probably the least palatable option for Palmer.

His candidacy alone could stir the departingchief exec.- who's served as mayor for all of the 20 years that Segura has lived here – to marshal his political infrastructure squarely inhis path by supporting another candidate.

The mayor and Segurawere originally allies. Eight years ago,heran and won on a slate with Palmer.

But that alliance unraveled over time, turned terribly sour, in fact; and in a fight for council president between Segura and Pintella, the mayor favored the latter.

Palmer's people say the mayor didn't stand in the way. Segura just couldn't get the support.

Segura's side says the councilman has repeatedly tried to work with the mayor, and has repeatedly been told to go away, the administration will handle it.

As Palmer retires after two decades in a bad year for incumbents, Segura projects comfort with the terrain, even welcoming resistance from the outgoing mayor. If Palmer was once strong, perhaps his opposite in these times could prove the favorite.

So runs the logic.

"The winds of change are blowing in our favor,"Segura shouted to applause.

Forfeiting another run for his council seat in order to run for mayor, ifhe loses next year, he's gone.

But for another five months, until May 13th Election Day, the high fives and high tens and hugs and radiated energy coming out of Segura's corner will continue in abundance – and, based on today's testimony -very probably after that, whatever happens. 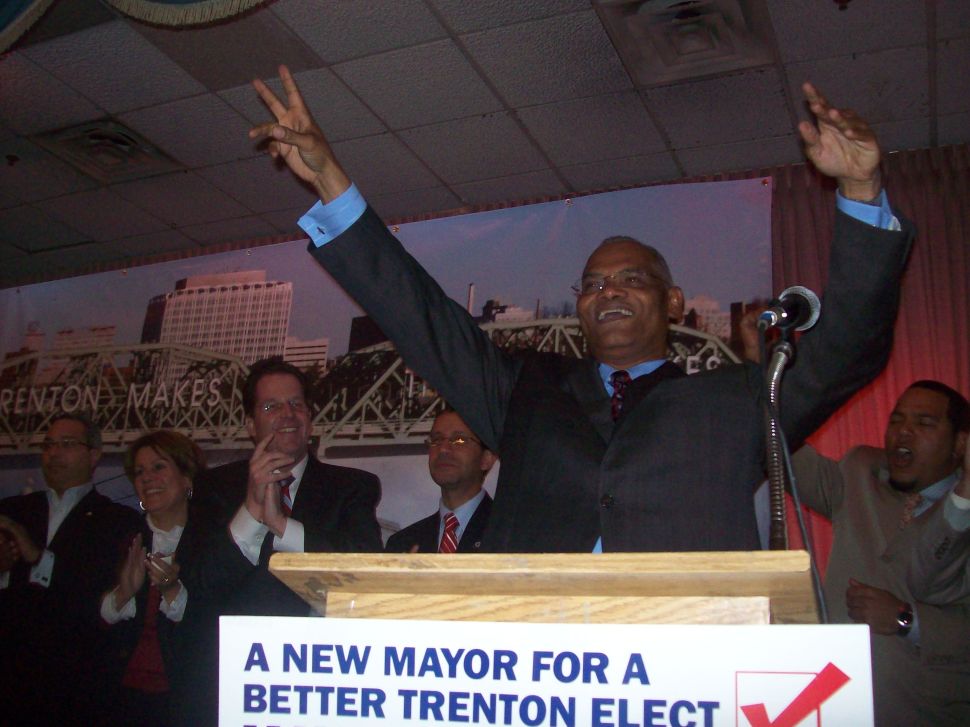