TRENTON – Proclaiming himself an authentic and grateful son of Trenton whose mother taught him how to overcome, former Mercer County Freeholder Tony Mackformally kicked off his candidacy for mayor tonight at the Marriott in front of a crowd of supporters.

"My mother moved here with five kids to a two-bedroom apartment on East State Street and my mother did all she could," said the 43-year old Mack, whose mother stood in the front row of the crowd wielding atestimonial sign of her son's stamina which said – and this figures to be acampaign slogan – "The Mack is Back."

"And I thought to myself back then,"explained the candidate,"'I'm going to do all I could to get my mother out of this situation,' andI thought it was going to be through athletics, but when that didn't work outit was academics – somebody had to help me."

Thecrowd was roused now and clapping him through the story as he continued.

He was hitting the resolutionoratorically now, returning to the original question of the speech, which was why he could possibly want tobe mayor of Trenton, a citybesieged by high crime and unemployment.

"You see, at the end of the day, I don't have a choice," Mack declared to mounting cheers. "Because without the community, I probably wouldn't be standing here today."

It's been a tough trudge, he admitted.

"For four and halfto five years I've been on the rough side ofthe mountain, but I'm back!"

Therunning motif of returning referred, of course, to Mack's2006 challenge of Mayor Douglas Palmer, which resulted in aMack loss followed by what looked like the meltdown of his political career as he famously entreated the party committee to back him last yearfor re-election to the freeholder board.

That painfully didn't work out as Mack ran and lost off the line.

But, "Be not dismayed," said the state Department of Education special investigator with his wife and three children standing behind him onstage. "The Lord has taken care of me, and now I'm here to take care of you. I know we're on our way to City Hall, I just have that feeling this time."

When he respectfully mentioned Palmer, he talked over a scattering of boos.

"The mayor announced today he's not running," Mack started and someone yelled, "Free at last!"

"Let's give him a hand," said Mack, provokingsluggish applause.

"I picked up the newspaper and I read it twice because I wanted to make sure he doesn't change his mind," he added of the near 20-year retiring mayor.

This was a big and expansivecrowd Mack and hisallies -including brother Ralphiel and campaign manager Jerell Blakeley -assembled tonight as they head into a question mark contest, which includesMack, Council President Paul Pintella, Councilman Manny Segura, Freeholder Keith Hamilton, and others – and possibly others on top of that before next May and the winner take all showdown.

Starting at around 5:30 p.m. tonight, the guests came and kept coming through the sliding double doors, across the carpeted hallway and into the bowels of the Marriott.

At a table crouched three men amid clinking wineglasses and back chatter and one of them was saying to theother two who listened wordlessly, "You've got to appreciate the energy level Palmer brought to the job. Energy. Level."He elevated a hand past his face, apparentlyto illustrate the heights to which Palmer's endurance took him over the course of two decades.

Part of Palmer's energy went into making the Marriott happen and now here stood Mack at last, making his announcement with the field cleared of the mayor he couldn't beat (and who punished him for challenging him when Mack sought the party line and didn't get it as a familiar domed figure stood in the back of the Masonic Temple and observed the collective payback) – willing to stand in the architecture of the Palmer legacy and pronounce a "change" message.

But Mack – a celebrated football and baseball player and wrestler in high school – saidnotwithstanding the mano-a-mano with his old friend turned rival turnedconqueror turned retiring mayor, "No one can do it all. You build on what other people do." 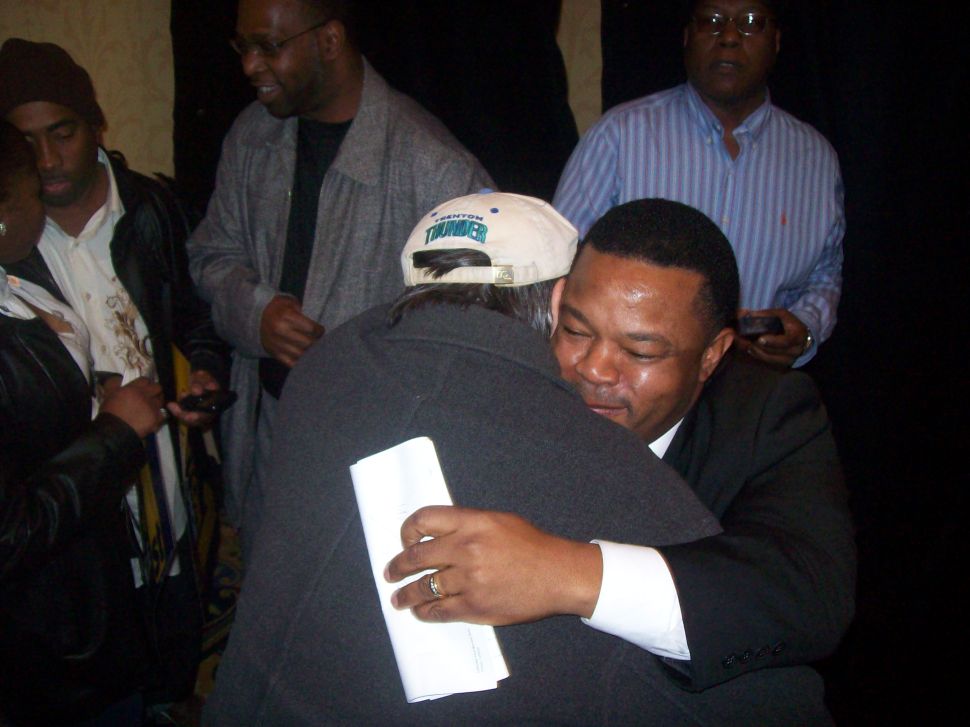