TRENTON — Introducing her as a tough attorney who speaks truth to power, Gov.-elect Christopher Christie today introduced Essex County Prosecutor Paula Dow, who was a federal prosecutor during his first two years as U.S. attorney, as his nominee for state Attorney General.

“We have worked together now for nearly six years, and in those six years I will tell you that she has grown immeasurably – even beyond where she was when she worked in the U.S. Attorney’s Office, as a manager, as a leader and as a lawyer,” said Christie at a press conference this afternoon.

Christie said that Dow was one of the first U.S. Attorney’s Office staffers he talked to upon assuming the office in 2002, when she was a line assistant with the special investigations unit.

“It was and remains to this day one of the most candid conversations I’ve ever had with someone who worked for me,” said Christie. “Paula spoke very bluntly about where she thought the office was, where she thought it needed to go, and immediately questioned whether I was being credible with her or not about where I wanted to take it.”

Christie also introduced his leadership team for the Department of Law and Public Safety, all of whom are either current or former staffers of the U.S. Attorney’s Office: Phillip Kwon, the current deputy chief of the U.S. Attorney's Office’s criminal division, will be the new first assistant attorney general; Marc Ferzan, who holds the same title as Kwon, will be executive assistant; and Essex County First Assistant Prosecutor Carolyn Murray, who is also a former U.S. Attorney’s Office staffer, will serve as counsel ot the attorney general.

Dow, who will take a pay cut if she is confirmed to become the state’s top prosecutor, said that she took the job because it presents a new challenge.

“I love being a prosecutor, so who cannot love being considered for the next attorney general,” she said.

Neither Christie nor Dow went into specifics about the future priorities in the office’s case work. Christie said he would leave those decisions to Dow, who said that it is too early to address them.

The choice of Dow, an African-American Democrat, has already been read by observers as an olive branch to Democrats. But Christie said that was far from his top consideration in making the choice.

“Paula’s a Democrat? Don’t tell me that,” he joked. “Listen, what I’ve said all along is that I want to pick the best people, and the best people regardless of party. When I was in the U.S. Attorney’s Office, I never knew what peoples’ party affiliation was. We never talked about it.”

Questions about senatorial courtesy hung over the press conference this afternoon, partly because Dow's nomination as Essex County prosecutor was delayed by two of its senators. Already, two out of Essex County’s five senators indicated that they will sign off on the nomination, and Christie expressed confidence that the nomination would proceed.

Among the senators who will have to sign off is state Sen. Teresa Ruiz (D-Newark), whose husband, Essex County Freeholder Samuel Gonzalez, was charged with ballot fraud by the office Dow has been tapped to lead.

Dow said it would be inappropriate to comment on ballot fraud litigation, and said that she looks forward to discussing her nomination with Ruiz.

“I will say that I have deep respect for the senator whose husband has been implicated. I think she’s a fine woman and will have a great tenure, and many more, in the state of New Jersey,” said Dow.

In terms of Dow and other nominees, Christie presented a simple strategy for getting them through a legislature controlled by Democrats: present them with such good nominees that they cannot justify blocking them.

“I understand how the system works, and the way I’ll deal with it is to be very upfront with them and to try to put forward each and every time people of such unquestionable quality that they wouldn’t want to stand in the way for any reason,” he said.

When asked whether his own perceived threats to encourage his Republican allies to use senatorial courtesy to block a flood of last minute appointments from outgoing Gov. Jon Corzine, Christie

“I threatened that?” said Christie, who went on to stress that negotiations were ongoing between his staff and Gov. Corzine’s. Then he turned the conversation back to the appointments he announced today. 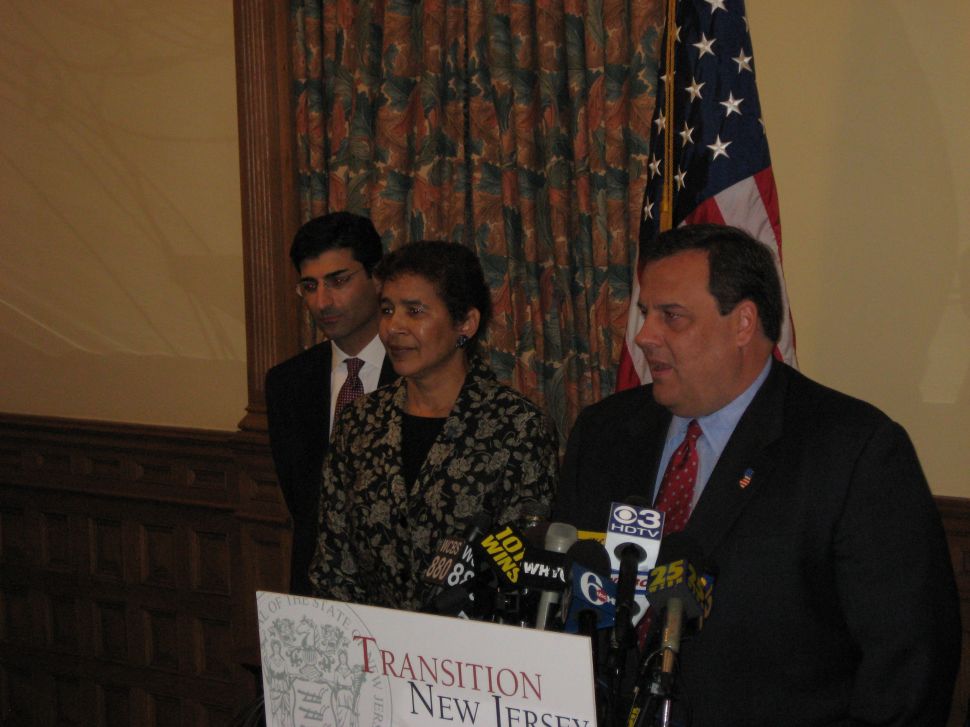