Daniel M. Gaby, an advertising executive and political activist who sought the Democratic nomination for United States Senator in 1972, passed away on Thursday. He was 75.

In recent years, Gaby had become a passionate supporter of school vouchers. He served as Executive Director of the state's largest pro-voucher advocacy organization, Excellent Education for Everyone (E3). His issue is expected to be on the education agenda of the new governor when Republican Christopher Christie takes office in January.

Gaby went to work as a copywriter at Keyes Martin – later, Keyes, Martin & Gaby – which became one of New Jersey's leading advertising firms. He became involved in politics as a leader of Eugene McCarthy's campaign for the 1968 Democratic presidential nomination, which was based on McCarthy's opposition to President Lyndon B. Johnson and the Vietnam War. In 1969, he became Chairman of the New Democratic Coalition, a group of liberal Democrats who had become involved in politics through the McCarthy campaign, and was chairman of the group's policy council.

Gaby became the first Democrat to announce his candidacy for the U.S. Senate in 1972, when popular Republican Clifford Case (R-Rahway) was seeking re-election to a fourth term. A self-proclaimed populist, Gaby launched his campaign from the ruins of the abandoned Essex House Hotel in Newark – once New Jersey's version of the Waldorf Astoria – and then described as a "shooting gallery" for drug addicts.

He was also no fan of the president, Richard Nixon, whom he accused of selling out to special interests in exchange for campaign contributions.

"He can fly to San Clemente and Key Biscayne, to Peking and Moscow, but he cannot find the time to visit Newark and Camden and Elizabeth and Paterson," Gaby said.

Gaby did win the endorsement of Kenneth Gibson, who had been elected as the first African American Mayor of Newark two years earlier.

In the Democratic primary, Krebs beat Gaby by about 59,000 votes, 43%-28%. Former Assemblyman Joseph Karcher (D-Sayreville), the father of the late Assembly Speaker Alan Karcher and the grandfather of former State Sen. Ellen Karcher, finished third in that primary with 16%. Henry Kielbasa, a perennial candidate from Linden, won 13%.

After Brendan Byrne was elected Governor in 1973, Gaby was considered the leading candidate for Commissioner of Community Affairs, but Byrne instead picked Patricia Q. Sheehan, the Mayor of New Brunswick.

When Essex County Democratic Chairman Harry Lerner retired in 1978, Gaby briefly entered the race to succeed him, but was unsuccessful. In 1980, Gaby was picked to manage President Jimmy Carter's campaign in the New Jersey Democratic primary. Sen. Ted Kennedy won that primary by a 58%-39% margin and a plurality of 102,722 votes.

In a 2007, interview Gaby accused teacher unions of "demonizing the word voucher so that is equivalent to child molesting" and said that school vouchers "empower the consumer to decide who the consumer wants to pay for that service or goods, and the government pays for it."

"Dan was the best of us. He spent his great life tirelessly working to bring freedom and equality to the downtrodden, the lost, the disenfranchised. Truly he fought for those who had no advocate, and he did so proudly and unapologetically," said Peter Denton, the E3 Chairman. "Dan gave the final years of his life fighting for the children of this state, and this nation. He believed that the fight for educational equality was a fight for the heart and soul of the Democratic Party, and our country, which will not prosper or survive if so many of our children continue to suffer the wages of terrible schools."

A memorial service is being planned for next Thursday in Newark. 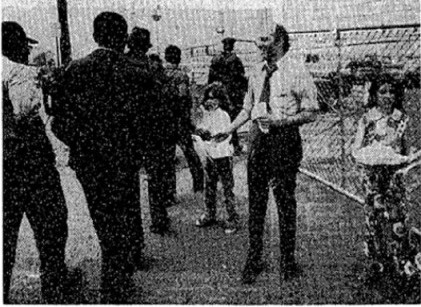