Atan event that will never be ajudged as the model for Roberts Rules of Order, the municipal chairs of the Essex County Democratic Committee lined up last night in near unanimity behind the re-election of Essex County Executive Joe DiVincenzo.

Of the 26 chairs either in attendance at a Monday night Nanina's in the Park meeting or accounted for, only state Sen. Ronald L. Rice (D-Newark) did not signify his support for the two-term DiVincenzo.

That's no newsflash, given the history.

Targeted by DiVincenzo in his own ultimately successful 2007 senate campaign, Rice's no-show last night occurred against the backdrop of a low-grade Essex County civilwar between DiVincenzo and Senate President Richard Codey (D-Roseland), a Rice ally.

Codey was irritated in the fall when his rival for the senate presidency, Senate Majority Leader Steve Sweeney (D-West Deptford) declared his victory over Codey in the Democratic caucus, in part with the help of two DiVincenzo employees: state Sen. Teresa Ruiz (D-Newark) and state Sen. Nia Gill (D-Montclair).

East Orange Mayor Robert Bowser told PolitickerNJ.com shortly after the gubrnatorial election that he had not ruled out a challenge to DiVincenzo in next year's June primary with the support of Codey and Rice.

Sources close to Codey say a Bowser run would hinge on the independent Democratic Party support Codey could generate in western Essex County, coupled with a combination of urban support Rice and Bowser wouldmuster in western Newark and East Orange respectively.

DiVincenzo intends to make his formal announcement for re-election on Dec. 11th.

Several in attendance later confessed they were surprised by the suddenness of Sebold's call for a resolution and later grumblingly eyed their names in printed support of DiVincenzo. 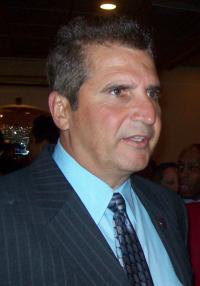