In the June 1978 primary, 26-year-old reform Assemblyman Peter Shapiro (D-South Orange) upset the Essex County Democratic machine in a 35%-33% — a margin of about 2,200 votes — win over Sheriff John Cryan (D-South Orange). Cryan was the front runner, and he lost votes because of two other organization candidates were also in the race: Donald Payne, a two-term Essex County Freeholder (now a Congressman) from Newark won 26% of the vote, and County Treasurer Samuel Angelo, a former Freeholder and machine candidate, won 6%.

More than 80% of Payne's votes came from Newark and East Orange. Clearly Payne and Angelo were the spoilers in Cryan's bid to become County Executive.

Shapiro had a history of taking on the powerful Essex Democratic organization; in 1975, at age 23, he ran off the line for a State Assembly seat in the old 28th district, which included South Orange, Irvington and part of Newark's West Ward. He narrowly ousted incumbent Assemblyman Rocco Neri (D-Irvington) in the Democratic primary. (Robert F. Kennedy, Jr., his classmate at Harvard, went door to door with him in West Ward neighborhoods that still had a significant Irish population.)

In the general election, Shapiro beat Republican Robert Notte, a former Executive Director of the Newark Housing Authority, by a 60%-40% margin.

Shapiro's election as County Executive instantly put him on short lists for statewide office; in 1982, when he turned thirty, there was some serious discussion about him seeking the Democratic nomination for an open United States Senate seat. Instead he ran for re-election to a second term as County Executive and easily defeated Republican James Troiano, who is now a Superior Court Judge.

Shapiro ran for Governor in 1985, when popular Republican Thomas Kean was seeking re-election. Some insiders continue to insist that Shapiro had a plan to finish second in the Democratic primary so that he could run again in 1989, when Kean would be term-limited. Indeed, the front runner in that race was Senate Majority Leader John Russo (D-Toms River), who ; Newark Mayor Kenneth Gibson, former State Sen. Stephen Wiley (D-Morristown), and former U.S. Attorney Robert Del Tufo were also seeking the Democratic gubernatorial nomination. But Shapiro beat Russo 31%-27%, and was forced to take on the popular Republican governor. He got clobbered; Kean won 70% of the vote, all 21 counties, and every town except Roosevelt, Audubon Park and Chesilhurst.

By 1986, when Shapiro sought re-election to a third term as County Executive, he was toxic to some of the old-guard Democrats. Taxes went up 21% — some say Essex's financial crisis came from Shapiro holding back payment on bills in 1985 so that he could claim greater fiscal success while running statewide – and Democrats were ready to knife him in the back. Republicans picked a party-switcher, Nicholas Amato, as their candidate. Amato had spent fifteen years as the Essex County Surrogate before Shapiro engineered a move to dump him from the organization line. Amato won by 12,000 votes and Shapiro claimed he was "sandbagged" by Democratic insiders, including then-Essex County Democratic Chairman Raymond Durkin, who was also the Democratic State Chairman.

Amato last four years; he switched back to the Democratic Party, but did not have enough support to win the organization line in the primary and dropped out. He went on to a highly successful career in the casino industry.

Amato's replacement was Thomas D'Alessio, the three-term Sheriff. D'Alessio won narrowly against Republican Michael Vernotico, the Deputy Mayor of Millburn, in 1990. He didn't last four years in office; he was removed after his conviction on federal corruption charges. The Assistant U.S. Attorney in that case, Kim Guadagno, will take office as Lt. Governor in January.

Democrats had a civil war in the 1994 Democratic primary, when East Orange Mayor Cardell Cooper and then-Essex County Democratic Chairman (now Assemblyman) Thomas Giblin ended the primary in a tie – each had 22,907 votes. The nominee for County Executive wasn't decided until a Judge ruled on challenged ballots and declared Cooper the winner in August. In the general election, Democrat-turned-Republican Freeholder James Treffinger beat Cooper by a 51%-49% margin. Treffinger won a second term in 1998, beating former Newark Mayor Kenneth Gibson by a 52%-48% margin.

By 2002, Treffinger was being prosecuted on federal corruption charges. He was the front runner for the 2002 GOP U.S. Senate nomination when federal agents (Gov.-elect Christopher Christie was the U.S. Attorney) raided his county office; he dropped out of the race four days later. DiVincenzo, then a Freeholder, defeated Giblin in a heated primary, and then went on to defeat Republican Candy Straight, a former Vice Chair of the New Jersey Sports and Exposition Authority. 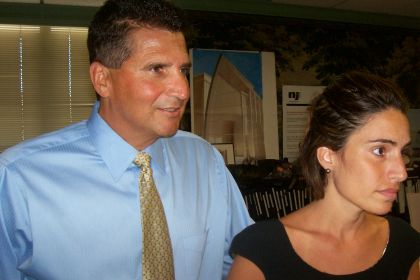