NEWARK – Although they intend to prepare for a fight – just in case – Councilman Augusto “Augie” Amador’s allies mostly dismiss next year’s East Ward council race as an overhyped contest between their constituent service driven veteran who may be short on personality behind a razor sharp moustache but gets things done, and a blown up interloper with people skills and an easy smile already reeling in the undertow of Newark politics.

But if the competitive potential of Amador v. Pantoliano sustained blows when the former secured the support of both Mayor Cory Booker and Assemblyman Albert Coutinho (D-Newark), and a big chunk of the business community, businessman Peter Pantoliano still gives himself more than a shot to topple the third-term incumbent councilman – in part based on his resume and private sector acumen but no less on his self-professed conviviality and approachability, qualities he says Amador lacks.

Because they like him, bon vivant Pantoliano insists Booker and Coutinho won’t be aggressive parties to a cause that destroys him, despite the East Ward Democratic Club’s best efforts.

“It’s no secret there’s no love lost between Al and Augie,” the challenger says of Coutinho. “Anybody in the game knows that. If you don’t know that, you’re fooling yourself. Our friendship is strong. At Jack the Jeweler’s Christmas party, Albert came close to endorsing me. If he had had a few more cocktails, it would have been a full blown kiss on the cheek. Unfortunately, he’s beholden to the machine.”

The machine, in this case, as Pantoliano sees it, runs according to the will of East Ward politico Joe Parlavecchio, whose longstanding alliance with North Ward icon Steve Adubato maintains the power structure in the East Ward and enables Amador to remain the councilman.

Then there’s Booker, whose ebullience gells more with Pantoliano than Amador, notes the challenger.

But Booker’s running for a second term next year at the head of a citywide slate that includes Amador.

As the owner of a successful optometrist’s shop on Ferry Street in the Ironbound since 1982 and a residential property owner who’s lived here for eight years, the 50-year old Pantoliano considers himself more than a longtime backer of the mayor’s.

Once Amador had Booker’s word that they would be allied again next year, however, the councilman made sure Booker sat down with Pantoliano and spelled it out to the political neophyte that whatever past affections the men nursed, Booker was going to be with Amador.

“Yes, he made a commitment to Augie,” admits Pantoliano. “But he also said to me (last month, in a meeting at City Hall) that if anyone ever told him not to run for something, not to follow his dream, he would work twice as hard at achieving his goal.”

Now Amador stands in the way of Pantoliano’s goal.
A native of Portugal and the first Portuguese to win a seat on the Newark School Board, Amador worked for PSE&G for over 30 years before securing a leave of absence to pursue his political career. A somber dignified presence to his backers, and unsmiling loner whose qualities of inwardness in a room suggest morose detachment to critics like Pantoliano, the councilman says that despite some past rockiness, his relationship with the mayor is strong.

He interprets his rival’s characterizations of friendships morphing into political paydirt as mostly political naivete.

“Just yesterday (Monday), members of the Booker team met with East Ward leadership to discuss the ways we are going to work together and join forces to maximize the vote for Booker and for myself,” Amador told PolitickerNJ.com. “This is about character and credibility, and the mayor and I have the same vision for Newark. I represent the interests of everyone in the East Ward. I am independent. I just voted against the property tax increase that was presented to the council (by the Booker administration) because I believe the residents of the East Ward are already overtaxed. I have areas of disagreement about the city with Booker, but Cory Booker is the best thing to happen to Newark and will be even better in a second term.

“I have some issues of disagreement with people around the mayor,” added the councilman. “Some have not done a good job of representing him. In a (June 2008) district leaders race we found out there was a slate of folks connected to the mayor’s office running against our district leaders, and to me it was a surprise because I had received commitment from the mayor that would not happen, but it was not a reflection of the mayor.”

“We ironed those things out at the beginning of the meeting,” he says. “Pablo was there, and he admitted mistakes going back to the district leader fight. It’s no secret he has a relationship with Peter. Peter’s a successful businessman. He supports people at a lot of political events. But in this case, it all comes down to where the mayor can get the biggest slice of the pie. If the mayor believes he could get more from Peter, he wouldn’t have asked me to join the team.”

More than a handshake, Booker’s committed $20,000 in campaign advertising money to Amador’s reelection cause.

Alert to being cut out of the power grid, Pantoliano knows his best chance of getting a foothold on the May ballot may be aligning with the slate that retired Municipal Judge Clifford Minor is assembling against the Booker Team, which already includes South Ward challenger Ras Baraka.

It’s a tough move, given his feelings for Booker – but he may have to go there.

“I received a call from Cliff last night,” says Pantoliano. “Cliff and I talk a lot. Look, I feel I can work with anybody. The mayor is doing a good job, I think it was more than he bargained for. I have to make a decision about that. I wouldn’t be embarrassed to run with Cliff. Sometimes politics dictates where you have to be. Both candidates realize I’m a reasonable man. They know I’m not doing this for any other reason than to serve the public good. If I were on the council, both men would have an ally – an independent representative, but an ally – regardless of which one of them’s in office. We have seen the YouTube video of Augie Amador berating the mayor, and threatening to walk away from the mayor. There’s no real substance or fiber to the relationship he has with the mayor.”

“If the area looked cleaner, we would do better,” says Pantoliano. “Right now, we have little sandwich signs stapled all over the place on trees and poles, and that just cheapens the look of the area.”

“There are a whole series of projects here that are not going to be completed in the next two or three years, including two new schools in the Ironbound, the riverfront park and conclusion of the Ferry Street project,” he says. “The (St. James) hospital situation won’t be solved until the end of next year, and we want to open the decayed old Ironbound stadium, which has been closed down for 30 years.

“Mr. Pantoliano’s entitled to his own opinion about me, but the voters will ultimately make a decision about whether it’s time for new blood or not,” adds Amador.
“This will come down to character. My relationships as a councilman have nothing to do with personal interests, and don’t have to do with being the most jovial person. I don’t get elected by the people in my district with 69% of the vote because I’m a jovial and smiling politician. They know I’m the only politician whose office is open on Tuesdays from 3 to 7 so that people can pay their water bills and tax bill. They know my staff works 24 hours a day, seven days a week. You don’t do those things because you don’t believe being a council person is anything other than than working with the whole community.”

Launching his campaign a few weeks ago, Pantoliano later bristled at the Star-Ledger’s description of a millionaire businessman prepared to throw gobs of money into getting himself elected, pointing out that he’s set aside just $20,000 for his campaign and intends – uncomfortably – to fundraise – just like everyone else.

“He underestimates this community tremendously,” said the councilman. “No one should go into a community and make a statement about having $1 million in the bank. That shows a disrespect for people with respect. I don’t like people starting innuendoes and underestimating the value of this community.”

The men locked up at a Christmas party this month in an encounter disputed by Amador.

Pantoliano says he was working the room of an Ironbound watering hole with characteristic charm, while Amador sat in the shadows.

“I have nothing against him. He uses the word ‘fight.’ I never use that word. I believe in term limits. Simple as that. He wants a fourth term. He’s putting self-service ahead of public service. I want to be there no more than two terms. But when I left this gathering, I went over to him and offered him my hand, which he refused to take,” says the challenger. “He just looked at me and said, ‘Are you nuts? Are you nuts?’ Then he waved his hand and said, ‘Knucklehead.'”

“Even with my worst enemies, I don’t have a habit of treating them with disrespect,” says the councilman. “This is a democracy. He has the right to run. Do I agree with it? That’s besides the point.”

Pantoliano, who heartily went door to door in the rain the other day and naturally gravitates to people in all weather, thinks he can shake enough hands and charm a sufficient number of supporters to win the contest, but the political structures of Newark interface critically, leaving even the most outgoing campaigner sometimes feeling like a loner; and in that regard, however stylistically divergent he may be from the classic backslapper, the alliances favor Amador. 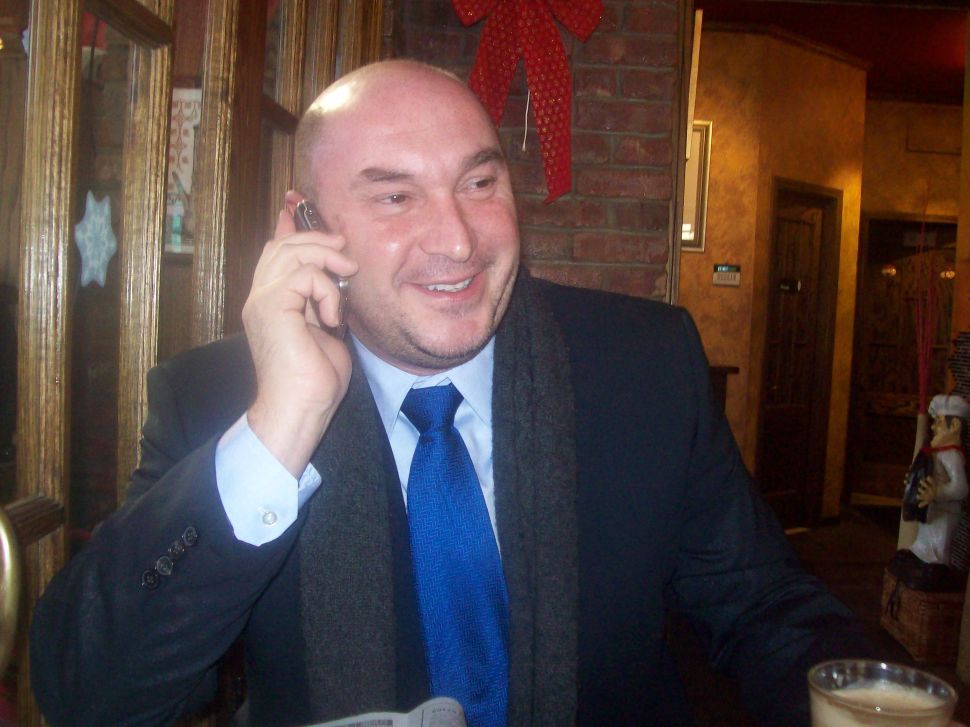