That's the message of the John Parnofiello camp, still in campaign mode in Rutherford a month and a half from election day, bearing down on a Jan. 7th court date and – they believe – handed a gift in the form of the perpetually toxic McCann.

The former Jersey Citymayor said all he wanted to do was help an old pal grind through the after shock of his electionand do some intelligence gathering for him that might reverse the outcome.

Thepolitician who once declared, "I'm a simple man: You hit me, I hit you," didn't figure on a big flare-up when he volunteered to check on the absentee ballot signatures ofJohn Parnofielloand Parnofiello'sticket mates.

But now that he's in a battle with the other side charging him with completely inappropriate tactics targeting seniors, he doesn't mind fighting back.

"Their council president committed a crime, voting for her mother for the last four years," McCann said of Councilwoman Maura Keyes, an ally of the other team's.

"I was going to give the woman a pass, but now they're trying to make it seem as though I'm the problem," fumed the former mayor."This is a crime. This is exactly what happened when they indicted an Hispanic American freeholder in Essex County. How do you indict him, and not indict this? Thank Kleinman. Because of Kleinman, now all they got me is mad."

Then Hudson County got in on the action, as attorney Steve Kleinman of Hobokenand McCann lined up on either side of the fray.

For Kleinman, who represents Parnofiello gratis, McCann has become the issue in the contest, essentiallyby virtue of his political infamy. The former mayor of Jersey City left office disgraced and did time on 15 counts of fraud and tax evasion. Now he's surfaced as a political ally of Hennessy's.

"Maura Keyes is not named in the lawsuit," said the attorney."She's not in the election contest.That's trying to change the subject."

Each in their respective corners as they vied for a seat on the council, Parnofielloand Hennessy went through all manner of contortions on Nov. 4thwatching the machine returns come in, which showed first one of them up, then the other -then the reverse -before Parnofiello, a Democrat, finally edged his Republican rival by one vote to presumably land a seat on the 4-2 Republican-controlled governing body.

After the hand ballot count, the results stuck, with still just one vote separatingParnofiello(2,719) and Hennessy (2,718).

Contesting the election with a suit that comes to a head in Bergen County Superior Court on Jan. 7th of next year, Hennessey brought in McCann, whose power operator presence on the Rutherford streetscape and alleged subtle doorbell bully stylings promptedcries of "foul" from the Parnofiello camp.

"I am extremely disappointed in the tactics Mr. Hennessey's campaign is using to discredit the votes of hand-picked Rutherford citizens," said Parnofiello, the 24-year old employee of a media company. "…I am baffled by the involvement of someone from Jersey City taking the lead on overturning an election in Rutherford that has been properly certified twice. I ask that these efforts cease immediately and that we get on to the real issues that face our borough."

"McCann visits a senior or ill Rutherford resident who voted by absentee ballot and is a member of the Democratic Party. He identifies himself as a Democrat and attempts to strike up a friendship. Once he does so, he shows the person his or her absentee ballot paperwork and tries to have the voter admit a technical mistake in filling out the ballot. McCann then expresses sympathy for the mistake and leaves the impression that he is there to help their vote to count. But the truth of the matter is is that he is secretly using that information to have that person's legitimate vote thrown out.

"…So far, Todd Hennessy has already used Mr. McCann's efforts to legally challenge the votes of an 89-year old man with health problems, a woman with bone cancer and her87-year old mother, and an elderly woman who lives alone."

Some of the elderly people said they were so rattled by McCann that will never vote by absentee ballot again – that is if they're around to vote next year.

McCann says Hennessy and Kleinman know that McCann can prove some of the absentee ballots obtained by their allies are illegitimate and can swing the election around in Hennessy's favor by 21 votes. They just want to change the subject by invoking the boogieman clause, says the former Jersey City mayor.

But Kleinman asserts that McCann has taken the silver-haired slippery guy act a step too far as he door to doors it Rutherford.

"That will be something the judge has to deal with," said Kleinman, when asked about the supposed illegitimate votes McCann says he's uncovered."We are looking at all the votes cast, but the point is inno way is John Parnofiello going to be doing signature matches on the elderly to see if they received assistance."

Although he's a Republican and McCann's a Democrat, Hennessy said he isn't ashamed or embarrassedto rely on McCann.

A 45-year old Hobokenfood business owner, Hennessy's originally from Jersey City and goes back a lifetime with "Gerry."

As for the tactics descried by his opponent, Hennessy said, "This is a standard practice. If you think things are not done right, you have to present it to the judge. I don't think Gerry is going after older people. I think more younger people who don't live in town recorded violations. I'm looking at people who voted for John Parnofiello who don't live in town."

Now amiddle and distance track coach at St. Peter's Prep and a member of the Jersey City School Board, McCann said, "I've worked 14 cases like this. You want to overturn an election, I'm your guy. Look, I've worked with Kleinman. We were on the same side when (Hoboken Councilman Carlos) Campos challenged (Hoboken Mayor Dawn) Zimmer. He didn't have a problem with me then. I know what to do and where to find people. I do it, in this case, because I want to do it."

"Iwas representing the City of Hoboken in that case," said the attorney. "I completely deny that. We were neutral. WasI friendly with Gerry McCann, sure; but we were not 'on the same side.'"

Even as they trade Hudson County barbs on Bergen soil, McCann, like Kleinman,said he is working for free.

"Zippo," he said, when asked how much Hennessy's paying him. 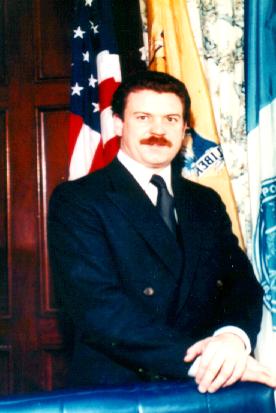