Ask Toms River Councilman Maurice "Mo" Hill what he thought of Jon Runyan's recent press roll out, and he prefers to turn the conversation towards his own experience.

"My fear is what's going on in DC. It's the economy, and yet they're dealing with everything but that right now," said Hill, who at the moment appears to be the Ocean County Republicans' leading choice to run for congress.

As much as party leaders from Ocean and Burlington Counties say they want to avoid another primary like in 2008 — when the two parties went to war in an expensive primary –they appear to once again be on a collision course.

Burlington County Republicans, however, believe they have a game changing candidate in Jon Runyan, a professional footballer who spent most of his career with the Philadelphia Eagles and is expected to self-fund at least a portion of his candidacy. And late last week, Runyan was shepherded by Burlington GOP consultant Chris Russell through a marathon of short phone interviews with reporters.

Both county organizations are going through with the formalities. Each party will invite candidates to go before their screening committees, who will then recommend a candidate to the county committee. Ocean County GOP Chairman George Gilmore has already met with Runyan, and Burlington County Republican Chairman Bill Layton has met with Hill.

"In the interview I came away with the very distinct impression that he's locked on with Jon Runyan," said Hill, who later added "I think Ocean County is looking to put forth a candidate. Whether I'm that candidate or not remains to be seen."

Hill, a retired U.S. Navy Rear Admiral and practicing dentist, says he has a lot going for him. His military experience squares well with the district's two military bases, and his experience as a health care provider gives him a good prospective on the that debate. His father, Maurice Hill, Sr., started the Northern Burlington Regional School District and became its superintendent.

"I do have a connection with both Ocean and Burlington Counties," he said.

Layton, for his part, acknowledged that he supports Jon Runyan, but said there remains plenty of time to avoid a primary.

Gilmore said that he did not read any of Runyan's interviews and would wait until he has to comment.

Monmouth University pollster Patrick Murray said that there "could quite possibly be" another primary.

"The Ocean County Republicans don't want to feel like they've been railroaded with a celebrity candidate who may not live up to potential," he said. "Politics is personal, and I think there's a sense that the Burlington folks tried to do an end-run around the process by putting up a celebrity candidate… Even if logic says try to avoid a primary, if you feel that you've been disrespected, that goes out the window." 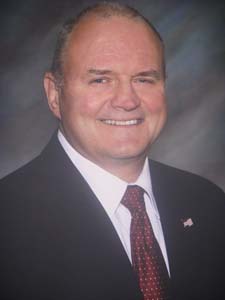