Never a stranger to straddling polar opposites in Newark's urbanimbroglio, West Ward Councilman Ronald C. Rice now finds himself up against the countywide Codey-DiVincenzo politicaltaffy pull, which may result in the former backing a challenger to the two-term county executive up for re-election next year.

The political forces of Essex County Executive Joe DiVincenzo say the county committee support hecommands in the partysmothersanypotential state Senate President Richard Codey (D-Roseland)may havefor a counter offensive, but Codey's people all along have argued their best shot – if they take it – against the organization-driven DiVincenzo would mostly infuse independent Democrats.

Now just days in front of DiVincenzo's Dec. 11th campaign kickoff with Codey forces still stinging in the wake of a formal vote that ousted their man from his chair of power in the senate, Rice gave a nod toward those similar contradictions that have always informed his local alliances, where he serves as one of Mayor Cory Booker's closest confidantes while remaining the loyal son of dedicated Booker antagonist state Sen. Ronald Rice (D-Newark).

"DoI think everyone in Essex County should have supported Dick Codey for senate president? Absolutely," says Rice."Do Ithink Joe D's done a good job as county executive? Yes, I do."

The councilman wants to talk to Codey and his father, the elder Rice -who also serves as the municipal party chairman in the West Ward – before deciding on a formal course of action.

A staunch ally of Codey's, Senator Rice last night did not attend a meeting at Nanina's in the Park in which the bulk of other municipal chair people affirmed a resolutionbacking DiVincenzo's re-election.

"Dick Codey has been a supporter of mine, andDick Codey hashelped me to raise money," Rice said."Joe D. has been a good county executive, although I may disagree with him politically.I haveto talk to mychairman -my father, and Senator Codey." 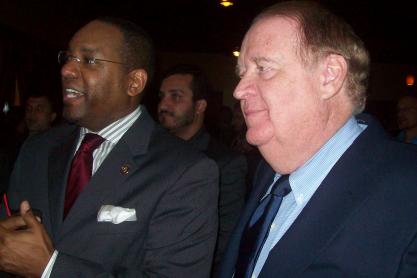