“I think Chris Christie used urban students to further his political gain,” said Baraka, a former councilman in the Sharpe James era who was washed out of office with the Booker wave.

“There are hundreds of schools with low test scores,” added the comebacking candidate. “But we have a new physical facility. Socially the school has changed. I’ve been here for just two years. Chris Christie has never been to Central High School. For him to criticize like that is not the academic thing to do. I invite him to come here. He has this concern about money. My impression is he believes the state shouldn’t spend as much money on Black and Latino students. My position is all kids deserve a state of the art high school like this one.”

While most observers of the Newark political scene see Clifford Minor as a long shot against incumbent Mayor Cory Booker, they anticipate a pitched battle in the South, pop. 50,000, where Baraka hopes to build on his community base to pose a formidable challenge to Councilman Oscar James II, a Booker ally.

“Whether we like the gov.-elect or not, you can’t hide the numbers,” James said of Central High School and the Christie-Baraka flap. “I need educators educating and focused on educating our kids.”

Although aligned politically with Minor, the 40-year old son of internationally acclaimed poet Amiri Baraka fashioned his own political organization and intends to run as a man who has no trouble bucking the system – and no qualms about derailing Booker, Christie, or anyone else if it means bulking up his own Brick City vision.

“We have Booker aides in these wards not council people,” said Baraka, referring to eight of nine council officials who ran on the Booker slate in 2006. “We need a councilman in the South Ward, not an aide. Oscar James is a nice guy. He’s doing his best in terms of what that means. But understand, the majority of murders in Newark come out of the south. Most of our schools are closing.”

For James, walking out of a council meeting Tuesday afternoon, Baraka’s angry young man routine is getting old.

“We don’t need an independent voice right now, said the the 28-year old councilman, scion of a South Ward political family. “We need all people working constructively to get this city throught he worst recession in history and solve a $40 million budget deficit. …This perception that Booker is weak in the South Ward is not accurate. There are some people who say the same old things about Booker, but I talk to people every day who say the South Ward is moving forward. Opponents say my relationship with the mayor will hurt me. We argue behind closed doors. We yell at each other over all sorts of things. Bottom line: let’s work together.

“When I started we had 25-30 block associations, and now we have over 55 active block associations meeting on a regular basis, and open and transparent governornent,” James added. “We have a new South Ward Police Precinct, affordable housing and Habitat for Humanity projects.”

Even today, with former Mayor Sharpe James serving out the final months of his two-year prison term on federal corruption charges, the city is divided “like a basketball team” between the old (Sharpe) James Team and the Booker Team.

Oscar James (no relation to the former mayor), says Baraka, is suited up on the Booker squad and can’t run plays without going through the captain.

“It’s all James versus Booker, Sharpe versus Cory,” said Baraka. “And unfortunately, Oscar owes his allegiance to Cory. When he was running for office here last time he was simultaneously getting paid by the mayor. Look, the whole idea of entrenched teams is laughable because you have players from both sides who are intermingled.  A lot of these players with Cory now were with Sharpe once. That tells me there is no ideological or political framework here.”

Councilman James, for the record, said he received payment from Booker for five months of political work, but denies that he received money when he became a candidate.

Sharpe James is due for release early next year, according to sources.

“I don’t know what he’s going to do,” Baraka said of the Booker antagonist and former mayor. “There are people in this city who still love Sharpe James and who think what he has to say is still important. The media is going to pick up on it. He will have an impact. Period.”

“When I grew up, I looked up at him playing Santa,” said Councilman James. “No matter how much he comes against me in this contest, I can’t be that much against the former mayor. I will just let him be. I have a lot of respect for the mayor. I literally followed in his steps to try to do  some of those things I watched him do. It’s his God-given right to criticize. I still think about all the good things he showed me in life.”

More to the issue than where Sharpe James stands next year and how vociferously he voicces his opinions, the politically and financially well-connected Booker has constructed the new feeding trough, Baraka argues, “and opportunism is opportunism.

“My point is Cory Booker came in with the wrong premise, which is that Newark is run by crooks and that necessitated eradicating old Newark and replacing them with high paid consultants,” said Baraka, whose critics say that at his worst he spills into megaphone on full volume at close quarters demagoguery.

An appearance by the South Ward candidate at the microphone in council chambers last month in which he trashed the Booker Team pushed the limits of surly civic performance, according to James allies, who also question how the educator will balance his salary his principal (over $100,000) and councilman ($88,000) in the event he gets elected.

“I intend to collect both salaries,” said the candidate. “I think it’s funny that they keep asking about that since some of them have three or more jobs. Joe Parlavecchio was principal of East Side High School and chair of the party. Come on. Being a principal keeps me grounded. This is political. I’m going to use past of that City Hall salary to employ people at City Hall, particularly people from the South Ward.”

“I don’t understand how you could run an entire high school in which the test scores haven’t shown any improvent and the South Ward – in the worst recession in history,” said the councilman.

The alliance of the subdued Minor – a former prosecutor and judge – and motor-mouthed street organizer Baraka already signals a a political tao concept at work, according to both men.

Probed with a question about his own dramatic style, Baraka builds up Minor while undercutting the man he sees as a grandstanding interloper : Booker.

“Newarkers are used to a rambunctious style, that’s true,” said the South Ward council candidate. “They’re used to parlor tricks and media frenzy. No, Cliff Minor is not going to chase the media. You’re not going to see him globe-trotting or camping out in caravans or tents. You’re not going to find him more enthralled with the national scene than Clinton Avenue. No. This is a man with his own style, who is intelligent enough and has the experience to be the CEO of Newark.”

Notwithstanding his efforts to project political independence, Baraka, as in past campaigns, is comfortable leaning on his father, who last night sent out an email blast seeking financial support for his son’s candidacy and calling him “that single spark.”

“The Booker  Administration raised our taxes 8 percent his first thirty days in office and has since gotten rid of the highest ranking Afro-American police officers so that the top ten Newark police officers now are non-black, in a city still 60% Afro-American,” wrote the elder Baraka. “There is much speculation across the city that with the water sale Booker is trying to pay off the 6.5 million dollar debt he owes to the elite groups that gave him that much to buy the City of Newark in the last election.”

Baraka will also have the support of state Sen. Ronald L. Rice (D-Newark), the West Ward Democratic Committee chairman and losing 2006 mayoral candidate, an alliance that will once again divide the Rice family politically.

“Ras keeps his own counsel, which I think the citizens of the South Ward deserve in a representative,” said Rice, whose son, meanwhile, West Ward Councilman Ronald C. Rice, affectionately calls Councilman James “my little brother,” and plans to help him fend off the upstart educator and organizer who would again be the South Ward councilman – but must get through not only James, but the Booker Team. 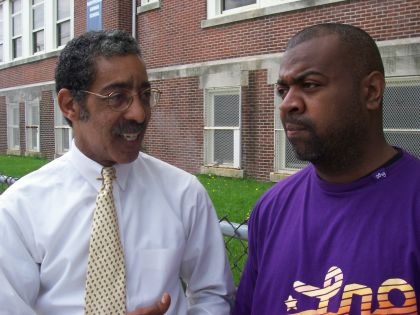