Even though it was out there in the political beehive that Trenton Mayor Doug Palmer wouldn't pursue a sixth term next year, until he actually made a formal announcment today saying he's done, a lot ofinsiders pictured him not being able to say goodbye.

Surely at thelast moment, he would jump on top of his desk and refuse to let go. But whether in elected office or not, Palmer said his dedication to the town of his birth remains the same.

"No matter what Ido, Trentonis me, and I'm Trenton," said the retiring pol, and the city's first African American mayor."The people in this city helped mold me and helped give me the character and valuesto bemayor. Ihope and pray the people vying for this jobtruly understand that this is a real commitment and it will take real perseverance. There are always problems in any city – it's about how a person goes about managing them."

Palmer's been a fixturein the mayor's officefor nearly 20years -just the thirdexecutive since 1962, whenNew Jersey's capital city went to a strong mayor's form of government.

But it's happening. He's going.

With more than a half a year left on the clock, Palmer today didn't want to talk about his legacy or his future in a conversation with PolitickerNJ.com.

"Over the next seven months, whatI am going to be doing is working on budget issues -we haven't introduced our budget -it'ssix months late – economic development issues, reducing crime, and the Christie transition," the mayor said. "This is a relay race and we are going to finish strong."

The 58-year old Palmer, who oversaw the redevelopment of Trenton's core, including the Marriott,has long made the enhancement of metro economies his signature issue.

As he leaves offfice, he said hewants to strike a productive dialogue with the incoming gubernatorial administration of Chrtis Christie to make his case for government jobs preservation and state aid in cities like Trenton.

"Ilook at cities as being at a crucial point, especially now with the downturn in the economy," said Palmer."State budgets impact us and we get less money, which requires us to either raise taxes, lay off employees or give furloughs. Those are options, yes, but I believe it's important to understand thatstate aiddoen't justhave a detrimental impact to the whole.I just look at this is a time where cities and suburban areas have to put forward a real agenda on jobs and our aid is a stimulus at the core.

"Ihaven't had one-on-one conversations with Gov.-elect Christie," Palmer added, "butI knowhis transition team has been in Trenton now and my hope is they will talk to mayors and businesspoeple and small business people and they will see our cities are not the problem, we're the solution; and not cutting monies to cities substantially helps the private sector. Alot of our monies go for construction projects iand jobs, and Ilook forward to meeting and talking to the transitionteam. I would urge them torecognize what economists say as it relates to cutting our state work force and the impact on cities like Trenton. The fact is, our state work force has already been significantly cut."

Palmer's decision not to run again has created a developing political flashpoint in Trenton, with numerous council people and city luminaries intent on succeeding him, including former Palmer foe and former Mercer County Freeholder Tony Mack.

Mack plans to formally kick off his campaign tomorrow.

"Doug Palmer and I have learned important lessons from each other over the years," the candidate said in a statement."While we have not always agreed politically, I have always respected him. He has been a mentor, friend (and sometimes opponent) to generations of Trenton leaders – his lasting mark on the city and state is undeniable. My family and I wish him all the best in his future endeavors."

Refusing to endorse a successor, Palmer said he intends to relish his new role as a non-combatant in the mayoral contest – for as long as he can.

"I believe there is only one person who said they are going to runat this point.I, like the majority of the citizens of Trenton, look forward to a real dialogue on the issues among the candidates. Iam as anxious as they are to hear their grasp of the issues."

As for his own decision, made public earlier today, "I'm at peace with it," he said. "It's just time." 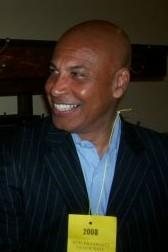