PATERSON – Reveling in his Paterson roots and running on a slogan of unity, Ward 6 Councilman Andre Sayegh tonight promised a gym packed with supporters that they would be part of a "grassroots campaign of historic proportions" as he formally kicked off his 2010 mayoral run.

"Look around this room," the councilman urged a crowd of blacks, whites, Latinos and Arabs gathered in the basement gym of St. Anthony's Church. "We're not dividing. We're here to unite. There's been too much division. Now it's time for some vision. This race is not about race. …It's time to unite, for a new quality of life. From Lakeview to River Drive, from Crooks Avenue to Straight Street."

With each delivered line the crowd cheered the 35-year old first term councilman, a former School Board presidentwho teaches at William Paterson University in addition to running a coalition of nonprofits in his hometown.

"Do you remember what the city was once?" said Sayegh of Passaic County's county seat, where residents voted in favor of a curfew to clamp down on crime.

"Do you remember what it was?"

An older woman groaned with the memory next to the current reality.

"We need playgrounds in Paterson, but not that kind of playground," said the mayoral candidate, prompting claps.

If elected mayor, he said he wantsto wage a war on gangs, build a recreation center and a senior center.

Having won hisWard 6 seat two years ago to succeed veteran Councilman Thomas C. Rooney on an old school shoe leather campaign,Sayeghvowed to managethe same kind of energized effort from now until May 11th of next year.

His organizational ability showed early at this church a few blocks from the train tracks, which Sayegh called a spiritual crossroads ofthe city's various ethnic groups.

Unlike a lot of these kickoff events in which the candidate is virtually sequestered in bubble wrap while underlings drum up the crowd for a big entrance, Sayegh was ubiquitous from the beginning: greeting, hugging, touching, grooving, schmoozing, finding the connecting point inpeople withno forced effort.

Hemoved from table to table as a blend of MJ, Spanish languagehits, Kenny G and Donna Summer harmonized the candidate's effort to reach a mosaic of the city's residents.

"Why couldn't you have done this in the daytime? It's cold," an older woman crowed as she blew down the stairs and into the festivities.

If it was a grievance blasted at close range into the smiling face of the man of the hour, it was also the only complaint among those otherwise happily descending supporters who made straight for the petition sign-up table overseen by Sayegh's fiance before bee-lining to the catered barbecue.

Sayegh went to City Hall at 8:30 this morning to pick up the petitionshis team members now wielded on clipboards at the door and presented to guests. The mayoral candidate needs 666 signatures. He estimated he could knock out over a third of those tonight.

"He weighs 195 and a half pounds and stands six foot two and a half – out of Paterson, New Jersey," Hill thundered into the microphone at the start of the rally, just after the anthem, pledge and local rendition of "I Want One Moment in Time."

"The new heavyweight champion of Paterson!"

The "Rocky" theme blasted the crowd.

Loosening up in the wings, Sayegh ran to the front of the room andshadow boxed combinations before squaring up against Hill, who threw a futile swing before Sayegh playfully laid him out.

A woman in the front row piped,"French! What about the French?"

"Oui, oui," Sayegh said. "I had a croissant this morning – and my name is Andre!" 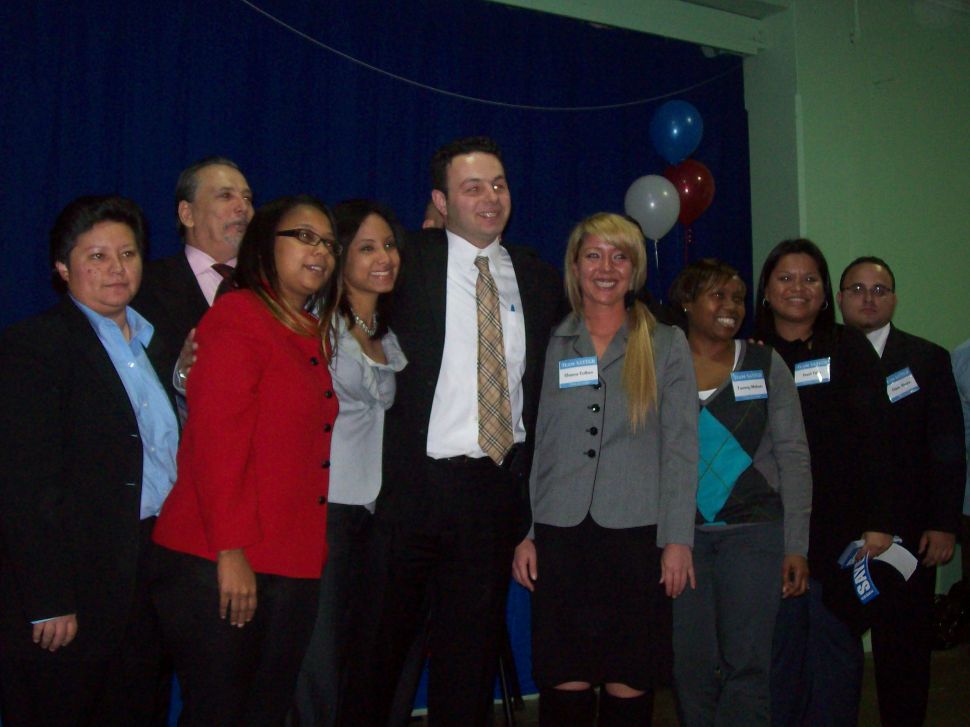