Proclaiming change in the face of the Hillary Clinton juggernaut, Mark Alexander, Obama's New Jersey go-to guy during the 2008 Democratic Primary, doesn't see a contradiction between the candidate whom progressives embraced as an antidote to the Iraq War embattled W. – and the commander-in-chief who last week called for an additional 30,000 combat forces in Afghanistan, even ifAlexander acknowledges some first-year mechanical stumbles.

"During the campaign,he consistently called for a more responsible approach in Iraq and a stepped up role in Afghanistan," said Obama's former statewide director, a resident of Montclair and professor of elections and Constritutional Law at Seton Hall University.

"People may be unhappy, and I understand that, but they should not be surprised."

But as a self-professed change agent, did Obama not consistently give the impression throughout the campaign that he would be less willing than the sitting power structure to rely on a military as opposed to a counter terrorism Middle East strategy, PolitickerNJ.com asked Alexander.

"Iassume his decision here is not exclusive ofintelligence operations,"he said."I have trust and faith in him that he haas thought aboutthisand concluded hecan't make enough progress without enforcing it with additional troops. He has additional information.Certainly seeing this idea of going to war is very troubling, but in his speechhe told people what the threats were and laid out case, which I believe demonstrated apresident making these decisions very carefully, as opposed toBush, whodid not have that confidence from the American people."

On the other major issue of the hour – healthcare reform – Alexander concedes that Obama to this point has not exercised the full weight of his office in forcing a progressive outcome. Indeed, anannouncement by Senate Majority Leader Harry Reid (D-Nevada) last night that moderate and progressive Democrats had reached an agreement, whichwould extract the public healthcare option from the Senate version of the reform bill, could haunt the President, who initially argued for the measure.

"He is doing a great job as president, I want to be clear," said Alexander, "but this is where he has the hardest time. He is relatively new to Washington. He wasfour years in the Senate becoming President and he doesn't have quite the ambassadors or enforcers of someone more seasoned. His teamhas tofind a way of exercising that power: the power of the presidency.He has strugled in that regard. The Republicans are being obstructionist at best, andpart of it is desperation. When you have40 votes in your caucus, you have no way of getting a deal upwards, no way to build up enough in the Senate to get a majority.When the president says we're going north, they go south; when he saysblack, they saywhite, etc."

Obama's posture on this issue – given the advantages of numbers he has in the Senate – 60-40 – is a little too defensive, for Alexander's liking.

"He likes to build consensus because it really matters. It really matters for him to berespectful and to listen to everyone and empower more people," he said."I've seen him in that decision-making mode andI absolutely admire it, butat a certain point there's the hard decision and he has to say 'I am the president andI am going to stop this.' With (Connecticut Senator)Joe Lieberman, for example,you have to just play hard with him and tell him, 'You will lose your chairmanship if you don't go with me on healthcare. You pretend to be about the values of the Democratic Party, so stand up for it. If you want to be independent, fine, but you can't get all the goodies. You'll lose your chairmanship.'"

Having said that, Alexander, a former policydirector to the late Sen. Edward Kennedy (D-Mass.),insisted that he remains impressedby Obama'sswiftness in moving the issue of healthcare to the forefront.

"We are less than one year from when hewas innaugurated and we are very far down the road," said the former state campaign director. "WhenI worked with Teddy Kennedy in 1988,I was 23 years old,youthful and idealistic, and I told him at one point,'Senator, we've got to get healthcare done!' He looked at me and said, 'What do you think I've been working on the last 25 years?' So thepresident has madeprogress to this point."

The interview with Alexander occured on the same day as an announcment by Organizing for America (OFA), which plans to open a New Brunswick headquarters this coming Saturday "to build on and strengthen the historic grassroots network created during the Obama campaign."

"I think it's a very good thing," the Obama politico said of the organizing effort . "What we were campaigning on was a commitment to change politics policies because we could actually show a new kind of politics. We need to organize for change and we need to do it in pursuit of progressive goals. People can still very much resonate with that to the extent you talk about empowering people.

"My own personal concern and focus will be on building that Obama model; away of politics particularly effective for Democratic Partypolitics," he added."Some people won't like this push toward empowering more people, apush away fromhaving control in small numbers of people. What we're about is convincing peopleofwhy it's actually okay to empower more people."

"The last thing an executive wants is to run in the worst economic times ever,"Alexander said. "It'sa recipe for disaster. (Gov.-elect) Chris Christieturned people out and his field staff should get some credit for that. The numbers in Monmouth and Ocean were staggering, andput the pin in the ballon. Jon Corzine, particularly given the early struggles he faced,never had along, uninterrupted tenure in which he could put out a message to the people about what government was doing for them, and sothey didn't have a strong sense of whyJon Corzinewas a good governor." 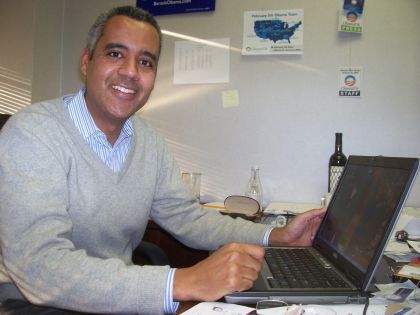