NUTLEY – Talk to the players on the ground here and it fast becomes evident that localties run deeper than party, which is why it's difficult to picture Gov.-elect Chris Christie's Nutley victory sparkingsignificant change amongGOP ranks, even though individual Republicans have a dominating presence here.

Gov. Jon Corzine won Nutley in 2005 by about 1,000 votes but in this past election, Christieflipped the numbers on the incumbent, beating him in this Italian suburban bellwether, 4,669 to 3,407, or by more than the inversion of Corzine's 4,957 to 4,029 victory over Doug Forrester four years ago.

The question now forNutley Republicans is what they intend to do about it in a county where they are still dwarfed by Democrats and where Corzine beat Christie by a margin of 67% to 28%.

In short, canthe Essex GOP use Nutley as traction to take a message into 2011'scontests for 5th District freeholderand for senator in the District 36?

"There is an opportunity for Republicans to gain some momentum," acknowledged Nutley Mayor Joanne Cocchiola."The key is selecting good, attractive candidates."

Shebeat Tucci twice, once in 2004 and later in 2008, thesecond time by the widestcommissioner's victory margin in history – over 700 votes.

Even with Christie's win vivid in the minds of voters here, however, it's tough right now to picture her wanting to make a move in a so-called upward direction. She relishesbeing mayor. She feels connected to her hometown in that capacity that she doesn't believe she could feel in any other elected office.

"I'm going to run again in my commission race, I'm certain of that,"said Cocchiola, an attorney with the Sports and Exposition Authority. "The feedback in the community is very positive. I think I was made to do this job. Ilike being able to make a difference in people's lives. In this form of government, if someone has a problem, they can come to me and a lot of the problems are solvable. At higher levels, you often can't make the decision on your own. There are a lot of other things that come into play, and it's hard to be hands on at higher levels when you have a family."

Anyway, Cocchiola doesn'tthink the 5th Freeholder District seat currently occupied by Freeholder Ralph Caputo of Belleville is particularly winnable for a Republican.The district's configuration with Bellleville andBloomfield – not to mention the overwhelmingly Democratic Montclair -presents a virtual monolith, in her view.

"That would be a difficult race unless the district changes," said the former freeholder, a victim of redistricting in 2002. "I got all of Belleville with redistricting and I got destroyed. I lost by 7,000 votes in Montclair."

Of course, it helps Caputo that Cocchiola and Scarpelli and Tucci all genuinely like him, as they all genuinely like their homegrown Democratic Assemblyman, Fred Scalera, whom voters re-elected comfortably along with his running mate,, Assemblyman Gary Schaer (D-Passaic), even as they mostly rejected Corzine.

Cocchiola and Scalera grew up together.

Went to high school together.

"Nutley has always been a community of intelligent voters," said Scarpelli, a local chiropractor whose father was a commissioner before him. "Theywent for Christie – and they also went for Scalera and Schaer. People vote the person in Nutley. (Essex County Sheriff Armando) Fontoura does well here. (U.S. Rep. Bill) Pascrelldoes well here. The Nutley voter leans Republican, butwill vote more for the person than the party."

"That's also avery difficult seat towin the waythe 36th District'spresently configured," Scarpelli said. "The only way to win that seat- if it looks the way it does now – isto have a candidate from Nutley to pull big numbershere andoffset Passaic with Nutley and win southern Bergen."

Asked if he thinks he's the man to do that, Scarpelli said, "Not at this point. I'm happy running public works."

One glance at Tucci's resume suggests he would be a natural challenger for the 5th District Freeholder seat, having worked in the government administrations of Belleville, Bloomfield and Montclair while always demonstrating good vote totals in his hometown of Nutley.

Having said that, he wouldn't rule out pursuing the 36th District senate seat in 2011.

But without redistricting reconfiguring the map, "A Republican winning a freeholder seat will be tough," said Tuccci. "They would have to redo the whole thing.Right now, we're (Nutley) a little Republican enclave."

Going after Caputo's freeholder seat seems even more unlikely to him.

"Ihaven't thought about it,lookI always keep all my options open," he said. "There's an always an opportunity, whether it'ssignificantly redistricted or not,but it's a long shot. Iworked in all those towns and I'm proud of the relationships I've built over the years.

"Ralph's a good freeholder and a friend of mine," he added. "Itdepends on redistricting."

In that vein, Nutley Republican Chair Jim Piro said it's folly to discuss thesituation without knowing how redistricting changes the terrain.

"Let's wait for the district to be drawn," he said of the36th District."If it's drawn without Passaic (where Democrats outnumber Republicans by more than 7-1) in it we could think about it no matter where they went (with the rest of the district).

"In the freeholder district, the largest Democratic Party votes come out of Montclair. But all supposition is a waste of everybody's time. The new map is very material. One town can make a huge difference."

With political upward mobility in a holding pattern heading into next year's redistricting, there is some speculation that the new governor's administration might snap up Cocchiola for a Trenton job.

"Joannewould be an asset to any administration," said Scarpelli."She's intelligent and hardworking. If the governor's looking in that direction it would be good for us at the state level, but we would lose a great mayor."

Asked about that, Cocchiola said, "I don't count anything out. My husband and I were supporters of Chris Christie's and ifI were asked, Iwould be honored."

In the meantime – and this is likely not to change whatever happens – she'sthrilledaboutNutley. 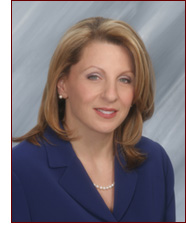