But while state Sen. Kevin O'Toole (R-Cedar Grove) unequivocally backs Dow, state Sen. Ronald Rice (D-Newark) said he does so with the expressed understanding that she will exercise independence and continue to pursue investigations and prosecutions in Newark launched by sitting Attorney General Anne Milgram- even if they tread on connections Christie enjoys with the North Ward Democratic Organization.

The organization remains at the center of an absentee ballot fraud case going back to the 2007 state senate candidacy of state Sen. M. Teresa Ruiz (D-Newark). Christie has a positive relationship with the outfit, which is anchored by Steve Adubato, sr., founder of the North Ward Center, a network of charter schools and services dedicated to improving the quality of life in Newark.

Although they have teamed up at various times as fellow Democrats, Rice over the years in city politics has mostly been a political enemy of Adubato's.

"Anne was stepping up to the plateand being accountable, and there arestill those who hope the investigations with voter fraud will continue rather than get cut off because of political relationships," Rice told PolitickerNJ.com. "I'll supporther nomination.I know her andI can work with her.

"The voter fraud in Essex County is not new," the senator added. "In each of the elections I've run, there was voter fraud but at the county level they just crushedthe complaints.I commend Anne for pursuing it. And again, it's not just voter fraud up here. People in governmentare making money here off of LLCs andcreating problems for legitimate people. Nobody wants to do any in-depth research. Paula Dow is agood woman who originally became the prosecutor when she was working withChris Christie.I want her to have an opportunity to exercise her true capabilities. I'm not so sure, given the politics ofEssex County thatshe was truly able to operate as prosecutor ather true potential, but she's a tough cookie.

For his part, O'Toole said he intends to sign off on Dow "immediately."

"It's an extraordinary pick," said the GOP senator, a Christie ally."Chris coming out of the box withDow is symbolic of what he's going to be doing as governor. She has a terrific track record. I will sit down and talk with her, but I intend to support her."

O'Toole added that he does not believe Christie's choice of Dow – a close friend of North Ward product Essex County Executive Joe DiVincenzo's – would compromise the state's pursuit of the ballot fraud case. 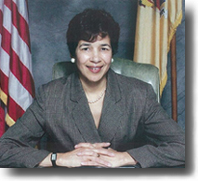