NEWARK – Theater matters to the minions of the North Ward Center, who learnedpolitical stagecraft in part from master director Steve Adubato, Sr., who sat in the front row of a sectioned off basketball court this afternoon and observed hislongtime friend, ally and protege Essex County Executive Joe DiVincenzo launch hisbid for an unprecedentedthird term without the benefit of the backdrop of Veterans' MemorialPark.

“While we have achieved a great deal during our first two terms in office, there is more that I would like to accomplish to benefit our residents. Our job to do what is best for Essex County residents is not yet complete. That is why I am asking voters to support me for another term,” DiVincenzo said. “Putting Essex County First has been more than just a slogan. For me, it is a reminder of why I became an elected official and an inspiration to continue our work on behalf of our 800,000 Essex County residents.

“Our work has touched every segment of our residents’ lives," he added. "We have improved all of our parks, modernized our infrastructure so that we are prepared for the future, preserved our historic sites and lent a helping hand to those in need. All of this is the result of an unprecedented spirit of cooperation that we fostered with our 22 municipalities, park conservancies and community groups. We hope to continue those partnerships as we move ahead during the next four years."

DiVincenzo had wanted the onetime deteriorated parking deck as a reference point for the speech, butwhiplash cold weather – the tent they had tried to fasten blew away in the wind – drove him and his supporters off the renovated land and indoors.

Even whilesettling for the Essex County Community College gymnasium, DiVincenzoenjoyed the company ofa full range of key county and statewidecharacters to back him up as heburnished what heidentified ashis transition of Essex from a junk bond rated nest of corruption with a $64 million deficitto an A-1 operation.

"When he started, some people called him a bully," recalled Sheriff Armando Fontoura. "He shouted. He threw things. He almost had heart attacks. This is not a self-aggrandizing thing. But you have to remember where we were coming from."

The two county executives prior to DiVincenzo went to jail. A movement began in the suburbs of people who wanted to break away from Essex.

"They even considered going to Passaic," said Fontoura, a former beat cop from the Ironbound.

"Could you imagine wanting to go to Passaic?" he cracked.

"With Joe D., things governmentally began to turn around," said the sheriff to mounting applause for the man in question. "No one has run a more efficient government than Joe D."

Iflove dominated the room and drained the potential for dramatic counterpoint, all nonetheless fell short of optimum in the land of "Putting Essex First," as the faces of several people from the organization recently charged with absentee voting fraud in the 2007 election of state Sen. Teresa Ruiz (D-Newark)- including the senator's husband, Freeholder Sammy Gonzalez – could be glimpsed among the smiling supporters of the executive.

Given Senate President Richard Codey's (D-Roseland) collapse at the hands of Sweeney for senate leadership, it was important too toconsider who wasn't in the room, and by extension, therefore, the plans that may be afoot out there for someone to challenge DiVincenzo, an unlikely prospect, even his foes argue, given his record – butpossible as long as the perception persists that Essex County son Codey is wounded.

"I think I came the longest distance today," saidSouth Jersey Senate Majority Leader Sweeney. "But the reason is Joe has a statewide presence….Joe is a true leader in the State of New Jersey. Joe, if I could vote for you, I sure as hell would – but I'm endorsing you, my friend."

As a playful reminder of what he expects in return for his support of Sweeney's ascent to the senate presidency over the local Codey, DiVincenzoaffixeda "Putting Essex First" pin to Sweeney's suit jacket.

"I don't want this decision to come back and haunt me," he told the South Jerseyan from Gloucester County.

Ever conscious of the Esseximplicationsofboth Ruiz's and Gill's support for Sweeney – virtually an unknown here, the county executive emphasized the lower house side of the deal, which catapulted East Orange's Oliver into the speaker's chair.

"If I had to do it all over again, Sheila, I would do it,"said DiVincenzoof his support for a woman who next year with thesupport she has in the majority Democratic caucus become the Assembly's first African American woman speaker in the state's history.

Gill and Ruiz didn't back Sweeney so muchto gain whatever benefits he may bring to his office, he explained, so much as to help clear the other half of the deal, which was to elevate their friend Oliver in the Assembly.

Wearing a sparkling holiday beret and speaking in a voicethat hoveredat the edge of deep emotion, threatening several times to break, Oliver noted that in addition to his government accomplishments in the areas of recreation and prison facilities improvement, DiVincenzo's civic engagement – nurtured, she said,at an early age in Newark's North Ward – caused him to support the ascension of the state senate's first Latina (Ruiz), and the first African American woman (herself).

"Joe D.," Oliver added, "is the first county executive since this form of government came about in 1978, who comes to work everyday."

Of course, the clapping that greeted those and other remarks occured without the added enthusiasm of Codey and his allies in the Oranges.

No one expected state Sen. Ronald L. Rice (D-Newark) to show today. Not only is he a Codey ally, but DiVincenzo's organization ran against him two years ago and nearly beat him.

He's long been on the outskirts.

So he was out again, as expected, even though his chief of staff, Freeholder Johnson, stood with DiVincenzo as a human hedge.

Another Codey ally, East Orange Mayor Robert Bowser, was predictably a no-show, and amid the faintest of faint whispers that Bowser could emerge next year as a challenger to DiVincenzo with Codey's support is thepotential for DiVincenzo's allies topoint toOliver – who comes from Bowser's hometown – as an example of the county executive's devotion to East Orange – and to African-American women long shut out of the highest levels of government.

To any voters in the area of the Oranges still unconvinced, high on DiVincenzo's to-do list for his next term is the development of the county's waterfront property on the Orange Reservoir, conceptualized as a park complete with miniature golf cours, restaurant and boathouse.

Alert to the various strategic obstacles posed byDiVincenzo's power concentration, sources say Codey's forces, if they seriously decide to mobilize againstthe county executive in 2010- plan to use the fact that all the heretofore mentioned players – Gill, Ruiz, Oliver, Gonzalez – are dual office holders who occupy positions in county government in addition to their respective chairs ofleadership as elected officials, compromising them – so runs the argument – to objectively serve the Essex County taxpayers.

That combined with the absentee ballot story still wracking the North Ward organization (ten people charged so far, including county employees), willprovide thepolitical springboard againstJoe D. – this coming from those who did not stand in the room today.

Buteven at that, say sources, the organizational challenges are too steep, too entrenched, the blowback potential for hypocrisy charges to stick to the challengers too real.

Arguably most significantly, history hereproves that he who runs on a line with longtime incumbent U.S. Rep. Donald Payne (D-Newark) has a significant upper-hand.

Just ask Giblin, whose allies say was in that 2002race against DiVincenzo until Payne endorsed the latter, effectively ending the contest.

But his brother was, Bill Payne, the former assemblyman, who happens to be DiVincenzo's deputy chief of staff.

"My brother and I are like the Corsican brothers," said Payne. "He's the nice one. I'm the other one."

He praisedDiVincenzo, then added that his brother next week intends to make "a phenomenal announcement" – pregnant pause, dramatic tension momentarily in the room – "… about things coming out of Washington."

Virtually negating all intrigue, at a meeting of municipal chairs earlier this month, it is said the congressmanrose and energetically backed DiVincenzo.

In the thicket of elected officials stood Corzine, beaten on Nov. 3rd, who had during his tenure as governor attempted to end dual offfice holding only to run headlong into Codey, ironically, given the good government argument the latter's allies now say they wiould muster against DiVincenzo.

By the time dual office holding made it out of the legislature in 2007, current holders of two or more seats of government power were grandfathered; in effect, strengthened.

The private sector-schooled governor was arguablythe biggest loser, aresult borne out by his inability to usehis efforts to end dual office holding with any great resonance in his re-election campaign.

Now he embraced DiVincenzo, went to the podium. A few people rose. More stayed sunk within the folds of cold weather clothes.

"Joe D. was one of the first public officials who stood with me in 1999," said the governor. "He's a doer. Character and integrity matter. I wish I could have had more'Essex County Firsts', it might have been a different election this year."

Corzinegave the microphone toBooker, whom many Democrats believe is the future of the party,the charismatic antidote to Corzine conquerer Chris Christieanda high priest of the English Language whotoday noted in his fire up the troops followup to the lame duck guv, "It is not the time to indulge the noxious naysayers and caustic cynics. …Some think government is about being a lapdog, butJoe D. isa fierce bulldog."

In the year since Obama's election,the Newark mayorhibernated in phrases he had used the previous year, but now on the eve of his own re-election he revved up an oratorical highwire act that even here – where he's performed Booker's Greatest Hits more than anywhere – had a crowd of hardened veterans sitting with rapt attention.

DiVincenzo, his wife Donna and two children, Joe and Kimberly- both teachers – in the front row,followedwith the finale.

For all the background agony over Codey and that longstanding rivalry, the debate about power and the effects of its concentration in a few hands, andthe lack of ideal backdrops, the county executive focused on what toall those who spoke of him underscored repeatedly abouthim and his legacy.

"Our strength is what you see in this room," said DiVincenzo. "Our diversity." 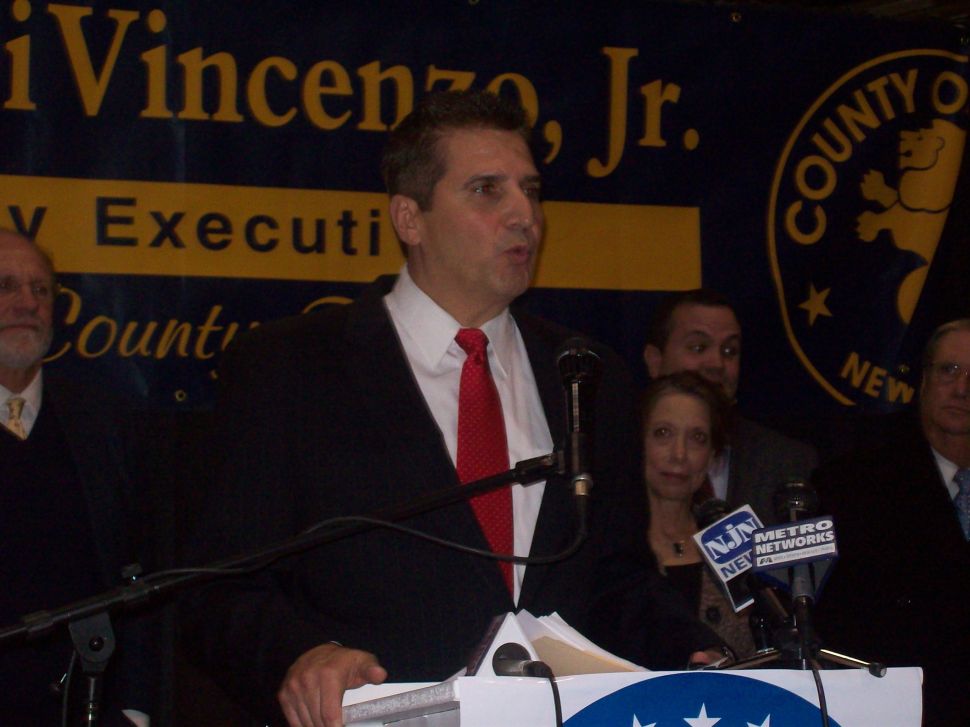