Sources say he's getting in the 2010 mayor's race.

The 35-year old Sayegh, a Lebanese Catholic born in Paterson,is a former School Board president and a political insider who has worked in the offices of both U.S. Rep. Bill Pascrell (D-Paterson) and state Sen. John Girgenti (D-Hawthorne).

"It's time to unite Paterson for a new quality of life," Sayegh recently told PolitickerNJ.com."Paterson's new day deserves a new way – a new day with Andre."

There are at least three other people who could also decide to run with impactful consequences: Councilwoman Vera Ames, Councilman Aslon Goow, and Councilman Rigo Rogriguez, but to date there has been no official word regarding their intentions.

On its face, Goow getting in the race would most obviously hurt Sayegh in the 2nd Ward, where Goow (a longtime opponent of the mayor's) and Torres have cultivated their separate spheres of influence and remain fiercely at odds. The veteran councilman's support would be a boostfor Sayegh on the northern side of the city.

If Goow isn't convinced he can and also doesn't commit to Sayegh, he may get in the race anyway as part of an alliance with Jones, right now the only African American candidate in the contest.

Sayegh has built good relations in the Dominican community, which is why he also is closely observing Rodriguez's movements. If the at-large-tested Rodriguez gets in the contest that could play havoc with Sayegh's cross-over appeal in that particular community.

Sources say Rodriguez to this pointhas been careful about making a decisionmostly because his at-large council seat is up next year and if heruns for mayor, he forfeitshis place on the council.

Jones's allieswant Rodriguez to get in the race because his presence would jaggedly divide the Latino vote between Torres (Puerto Ricans) and Rodriguez (Dominicans).

But even if Rodriguez stays out of it, sources say Joneswould enthusiastically welcomeSayegh, who would sap pockets of unconventional support from the mayor and allowthe council president tostart from the power projection platform of his black base.

It's a winner take-all election.

The one person Jones is watching closely right now is veteran Councilwoman Ames, whose candidacy would threaten to break up the African American vote and once again put Torres in the position of being the favorite.

Certainly, all of the candidates or would-be candidatesmake the case that whatever the dimensions of the contest, they respectively have the ability to serve all of the people, but on this count Sayegh – if indeed he gets in – will argue that he has the most credibility as the youth candidate who originally won his 6th Ward seat nearly two years ago with big backing from the Dominican community -more thanample demonstration of hiscapacity to build a mosaic. 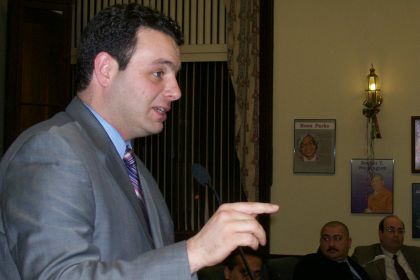