Bothered by his party’s failure this year to retain the majority on the freeholder board and the bruising beating that Gov.-elect Chris Christie gave to lame duck Jon Corzine on Nov. 3rd, Monmouth County Democratic Party Chairman Vic Scudiery nevertheless said he intends to run again for a two-year term as chairman when his party reorganizes next year.

“I’m definitely running again,” Scudiery told PolitickerNJ.com. “I put my heart and soul into this, and I just celebrated my 20 years as chairman.”

At the county level, incumbent Democratic Freeholder John D’Amico plans to seek a second term, Scudiery said. “And we’re leaving it open for (this year’s vanquished freeholder candidate and Middletown Committeeman) Sean Byrnes to run again,” added the chairman, a native of Newark who moved to Monmouth as a young man and became the anchor of Hazlet’s Airport Plaza.

“Our strength lies in municipal elections,” Scudiery said of the Democratic Party in Monmouth. “We have to work the municipalities and bring more coordination between local and freeholder campaigns. It never entered my mind not to run for another two-year term.”

One local race the chairman will be eyeballing with particular interest in 2010 is the Long Branch mayor’s race, where veteran Mayor Adam Schneider faces challenger Councilman Brian Unger.

Scudiery is an Unger believer.

“The eminent domain issue still bothers me in Long Branch, where I grew up working in the summertime,” said the chairman. “I probably knew a lot of the seniors living there for years who were thrown out of their homes. I’m very annoyed at that. I like Brian Unger. Sure, he took 17,000 to 18,000 votes away from us in that (2005) freeholder race (when Unger ran as a Green Party candidate), but we allied with him after that and he brought a new image to Long Branch. To tell the truth, I’m going to get involved in that race.” 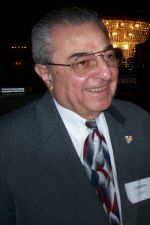