NEWARK – John Sharpe James weathered a couple of wars, being blown up by IEd’s on at least two occasions in Afghanistan and a total of 23 and a half years in the military, rising from private to major before retiring last October, so when he considers a civilian political contest – even here in New Jersey, even in the tough terrain of Newark overseen for two decades by his father  – he doesn’t immediately see the delineations of a battle zone.

“People ask me how I can this, and I tell them, ‘If I can survive Afghanistan, I can definitely run for an at-large seat on the council,” says James, who heads into the teeth of this 2010 contest as a decorated war veteran even as his more famous – some would say infamous  – father, former Mayor Sharpe James, anticipates release from prison next month after serving time on federal corruption charges.

The younger James welcomes the political expertise of his father, who served as mayor from 1986 to 2006, but points out that he himself is a veteran of his own campaign for city council four years ago – not to mention a veteran schooled in foreign wars.

“First of all, I ran the majority of my 2006 campaign, my father came on at the end to get me across the finish line where I lost by 300 votes, but now, as then, he has been advising me, this time from his place of incarceration,” James tells PolitickerNJ.com. “We talk once or twice a week. I appreciate every bit of advice I have received from him, and we – my mother, my brother and I – look forward to him getting released next month.”

A fire safety director with Essex County on a $77,000 per-year salary, a job he’s had for 12 years, James, running as an ally of mayoral candidate Clifford Minor, says he’s not targeting any at-large council person in particular among the four now sitting on the council: Donald Payne, Jr., Mildred Crump, Carlos Gonzalez and Luis Quintana. But he does object strenuously to the leadership of Mayor Cory Booker, his father’s longtime nemesis and successor, who’s heading a ticket composed in part of those incumbent at-large council people.

“First and foremost, I want to represent the people,” he says. “We need the voice of people in City Hall, not someone who’s just there to collect paycheck. This administration is spending too much money on outside contracts. They’re going to push off a $21 million pension obligation until next year. Money is going through the roof on outside employees. We have to stabilize the budget.

James dismisses attempts to characterize the race as a mano-a-mano between the South Ward scions of two prominent political families, although, of course, Payne – who also works at the county and serves as a freeholder – is the son of U.S. Rep. Donald Payne (D-Newark).

“It’s not a battle between James and Payne,” James says. “I am running for councilman at-large. If you’re a voter, you have four votes. If you’re a native of the South ward and you respect the James family and the Payne family, you can vote for both of us. Your third or fourth votes may be tossup, but this is not a South Ward family battle. You have a choice of four votes.”

Asked if he intends to collect both his county paycheck and, if elected, the $80,000 plus city council check, James says, “Yes.”

Coming back to Newark after his last tour of duty and aggressively campaigning now against Booker, the 41-year old candidate knows people inevitably compare him to his father, who became mayor the same year John Sharpe James joined the Army more than two decades ago.

“I didn’t tell him I was joining until after I joined,” James recalls. “I was at Morehouse College majoring in English. There were no wars on the horizon, and I always thought about Vietnam troops and the troops who were rushed into battle. I didn’t want to be in that position. I thought, if combat or deployment happens, it won’t be a surprise. I will already know my job. The first reaction of my parents was, ‘Oh my God, why did you do that?’ I did it because I figured we’ve always been fighters. I was mugged and shot twice, so joining the military wasn’t a big leap for me.”

A veteran of Desert Storm, an infantry officer who from December to September of last year led a team trying to build security forces in Afghanistan only to see 11 Afghan security recruits killed in a single blast, the younger James knows his experiences give him a different perspective than his father. He acknowledges that he doesn’t have the electric slide personality of former Mayor James – or the media savvy and charisma of Mayor Booker.

“My father’s always overshadowed me,” he says. “I’m a little more reserved. But all those experiences in the Army taught me that all of the flamboyance is not necessary, really. You can get your point across and be an effective leader by getting work done.

“The current mayor, I think, is a little too flamboyant,” adds James, who says his car was broken into three times during the last four months.

“This mayor’s all over the news, but all of the media hasn’t translated into positive, on-the-ground change for the people of Newark. As much as they talk and badmouth my father or my father’s administration, Mayor Sharpe James instituted the housing program that changed vacant city lots into ratable housing for new residents.”

A jury also deemed that James’s methods in divvying up that housing stock crossed the conflict of interest line, but his son says he won’t comment on the case as it’s still in the appeals process.

“In the end, I don’t focus on whether Booker is liked or disliked,” he adds. “We’re putting a positive message out front. My father has always been loved because he is a son of Newark. He was here since the age of four. People ignore that he had a 30-year teaching career, but I run into people everyday who remember Sharpe James, the athletic director. See, the respect he has, he built before he ran for office.”

That’s one thing they share, Sharpe and John James, to hear the son tell it: the foundational career beyond politics.

“As the years went on, my parents appreciated my military service, and now I have a full and complete career that had nothing to do with politics, and that no one can take from me,” he says. “My resume speaks for itself. It wasn’t done for political reasons. I thoroughly enjoyed it. I took it as far as it allowed me to go, and it was an honor to serve.”

The connection between the James’s and mayoral candidate Clifford Minor goes back to the early 1980s, and the squared away former cop and prosecutor always impressed John James, he says. That feeling was mutual evidently, as Minor began searching for allies in his quest to become mayor.

“He reached out to me during my two-week leave in June last year from Afghanistan,” James recalls. “My father’s verdict had already been reached, I think. My father was actually sent away four or five days before I got home. I stabilized my mother and brother before I decided to run. When I made the decision, though, I told him I would definitely run, and I was honored to join forces with him.”

Most of Newark’s political classes don’t give Minor much of a shot against the Booker juggernaut, and likewise think the at-large incumbents will be safe. James says they’re entitled to their opinions.

“My father won in 1986 with no money, running with grassroots support,” says the at-large challenger. “I feel Cliff Minor will do the same thing. We have no media support, so we have no choice but to touch and shake as many hands as we can. We will get out the vote on Election Day.

“In the meantime, we’re looking forward to my father getting out,” he said. “I stop over there to see my mother two or three times a week. We’re surviving. We’re staying together. I feel good and confident. I like being out in the community.”

He lost friends over there, good friends, a best friend.

He supports President Barack Obama’s decision to send an additional 30,000 troops to the embattled country.

“The country is lawless,” he says. “They have never had a central government that’s been stable enough to affect nationalism. Every town thinks they’re their own capital ,their own country. There is no tying together of a United Afghan Republic really. We would show up in a town and say, ‘We’re here from a national government to promote stability,’ and people, farmers predominantly with third grade educational levels, don’t understand the national concept or formal government functions. I am in favor of expanding our footprint to affect some measure of stability, however, to give us one last push before we leave Afghanistan. We need a little bit more force protection to foster that spirit of cooperation, to stand up their troops so they can provide public safety and national defense.”

But having retired from the Army in October, James now sees another mission in his hometown of Newark. 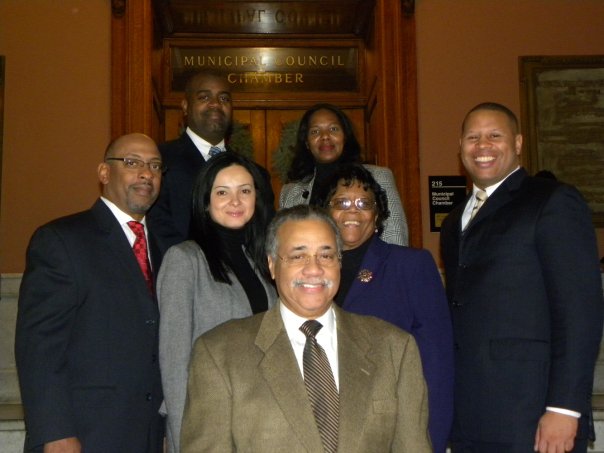