Confronted with the reality of running her solo practitioner law firm, Juliana Blackburn-Maldonado did a gut-check last week and decided she couldn’t run for an at-large council seat in Newark.

“Unfortunately, I’m not going to be a candidate this year,” said the commercial and real estate litigation attorney from the North Ward. “I was the last one added to the ticket. I just have such a hectic practice and a responsibility servicing my clients that I don’t have time to campaign effectively. If I can’t put 200% of myself in it, I can’t do it.”

Dissatisfied with the Booker administration, Blackburn-Maldonado said she intends to play an active role in helping challenger Clifford Minor’s “Newark’s Choice” ticket, for which she was briefly an uncertified candidate.

“No, not at all,” she said to the question of whether she was pushed off the ticket. “They still want be to be on the team, but they respect my decision as a solo practitioner. That being said, I am going to be working vigorously behind the scenes to help this team win.”

To date, an emerging narrative in the mayor’s campaign is that Minor, a former municipal judge, has neither the dough nor the zip to budge Booker, but Blackburn-Maldonado insisted her decision to bail has nothing to do with her top-of-the-ticket ally.

“I think he’s passionately committed to the campaign,” said the former candidate, who called Minor last week to tell him she was out. “It’s a different personality than Sharpe James or Cory Booker. I wouldn’t have accepted being on the ticket if I didn’t think his heart was in the right place. Listen, this is going to be a tough race. This is not a slam-dunk for the incumbent, or even for the council. There will be a change.

“I feel Cliff Minor is better connected with the city,” Blackburn-Maldonado added. “His roots are here, and his main platform is empowering the City of Newark. There hasn’t been much empowerment from Mayor Booker, and unemployment is at highest.”

“I think it’s him not being connected to the city that most disappoints me,” said the North Ward resident. “He spends more time out of the city than within the city. I feel Newark is on auto pilot. He lost touch with the community. That’s personally my opinion. With all his intelligence and popularity, I expected big and great things for Newark, but I don’t see the downtown area being revitalized. That’s what’s staggering to me. This guy has national recognition and has fundraised all over the country, but I haven’t seen the work product in Newark. The city looks filthy. I have never seen such anti-incumbent feeling and dissatisfaction.”

Blackburn-Maldonado said she had already collected about 1,300 petitions on her goal toward 2,000.

“Maybe I’ll run again in the future,” she said.

John Sharpe James, a candidate for an at-large council seat on the Minor team and son of former Newark Mayor Sharpe James, said of his former running mate, “I respect her decision. You don’t want someone backing out once the campaign really gears up. We weren’t afraid from the very beginning to come out of the gate without a full slate.”

Blackburn-Maldonado’s departure means the Minor team is running against the Boooker Team without candidates in the North, West and East wards and down one at-large competitor. 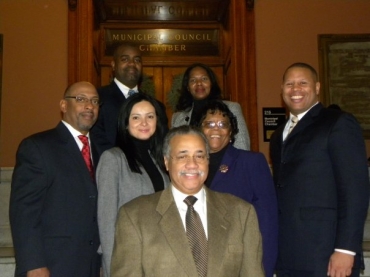