The “buzzsaw” that President Barack Obama used to describe Scott Brown’s Republican victory in Massachusetts had already run through New Jersey in the person of Chris Christie, leaving Democrats who once thought they were living in a blue state for life feeling abruptly as though they now may be in a state of siege.

When the statewide party committee convenes tonight at the Forsgate Country Club in Jamesburg, it will go through the motions of affirming Assemblyman Jon Wisniewski (D-Sayreville) as the next state party chairman. Backed by all 21 county chair people, Wisniewski assumes the two-year term position from departing Assembly Majority Leader Joe Cryan (D-Union) in especially turbulent political times.

Democrats know they’re up against it with former U.S. Attorney Christie in the governor’s office, U.S. Rep. John Adler (D-Cherry Hill) on high alert, GOP challengers pawing the turf in the 12th and 6th congressional districts, public unions in the crosshairs, U.S. Sen. Bob Menendez (D-Hoboken) bloodied up north by Brown in his role as chairman of the Senatorial Campaign Committee, and incumbent Bergen County Executive Dennis McNerney bracing for impact in a race with County Clerk Kathe Donovan.

But on the same day President Barack Obama delivers his State of the Union speech, Assemblyman Albert Coutinho (D-Newark), chairman of the Assembly’s Commerce and Economic Development Committee, said rather than folding into an apologetic posture one year into Obama’s first term and less than a month after Gov. Jon Corzine’s departure, Democrats need to reaffirm core principles.

“I firmly believe New Jersey continues to be a progressive Democratic state,” Coutinho said. “No question losing the governor’s race is a big loss, but we will do well as long as we stay true to our root causes: supporting working families and growing our economy together with our principles.

“Our governor had some challenges communicating his accomplishments,” the assemblyman added. “But I’m confident that there is real leadership in the party, starting with Senator Menendez. Senator Menendez is a national figure – maybe we need him in New Jersey a little more since he will be the next Democrat to run statewide. I’m very comfortable with the experience of Assemblyman Wisniewksi on both the policy and political sides.”

Coutinho said he believes dire economic circumstances give Democrats a chance to put up a meaningful fight,  even – or maybe especially – in the face of an invigorated anti-government Tea Party movement.

“We cannot forget how we got in the mess,” the assemblyman said. “Republicans have been in change nationally for 20 of the last 29 years. “When we look at the last crisis, what caused it was lack of efficient government involvement in the economy. Yes, a part of our budget problems is related to too much government, but the main reason we are in this is because of an international financial crisis caused by continual deregulation, to the point where the whole system ran amok and eventually collapsed.”

As a Democratic Congress struggles with healthcare reform, Coutinho said, “Everybody should ask themselves a question about why the insurance companies need to spend half a billion dollars to keep the status quo. If that’s not an indictment of the current system, I don’t know what it is. Everybody knows how expensive it is to buy health insurance and there are 40 million people without health insurance. Most small businesses can’t afford health care for their employees. There is a role for government here. Government needs to fix something within private sector that isn’t functioning properly.”

But an $8 billion dollar budget deficit addled state government isn’t functioning properly either, to which Coutinho admitted, “The current pension system is broken and we need to fix it. But the difference, I think between us and the Republicans, is the unions need to have a say and a seat at table to negotiate corrections rather than imposing our will unilaterally. We can’t blame public employees. I like the concept of furloughs – spreading the pain in lieu of mass layoffs.”

On education reform, Coutinho said he’s willing to look at experiments but does not believe vouchers and school choice models can be brought to scale, and argues that the bulk of education reform must be based on a public school system.

“I was happy to see (vouchers proponent) Bret Schundler join the Christie admininistration because of his experience with cities, but I would have liked to see him at the Department of Community Affairs, more than at the Department of Education,” said the assemblyman. “He has a tremendous track record and knows how to grow the economy and develop a city the right way. While I’m pleased that his intelligence and expertise can be used at the cabinet level, am I concerned about vouchers, yes, somewhat.”

Poised to go on the New Jersey Chamber of Commerce’s train trip to Washington, D.C. tomorrow, Coutinho criticized the governor mildly for not sending a representative on the annual jaunt.

“I respect his decision that he has more important issues here,” said the assemblyman. “But I do believe it’s a mistake for him not to allow cabinet members to go. We need to work together with the business community, and I don’t how thumbing your nose at the two largest business organizations (the chamber and the Business and Industry Association) in the state sends a business friendly message.” 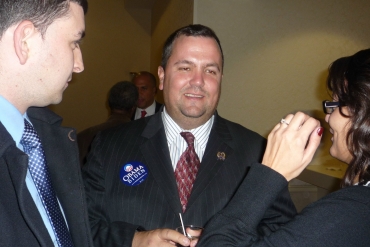