NEWARK – City Hall: a hammered out homage to rustbelt royalty with Corinthian columns hoisting four stone and stucco stories uplifting a rotunda that shapes and centers the whole relatively squat structure, cast on the exterior with gold leaf to shame any statehouse.

There’s Mayor Cory Booker on the top floor, smiling in the glare of the camera crew that hustles with back steps down the hallway, chronicling the mayor’s movements as he makes his way to the clerk’s office to pick up petitions to file to run for a second term.

Accompanying Booker – as part of an entourage that looks like a space shuttle crew roll-out – are the nine sitting city council members, all running as members of the Booker Team.

“Look, I’m not going to say things are the greatest in the world in Newark,” says At-Large Councilman Luis Quintana, a remnant of the Sharpe James era who made the transition to the new look Booker Team in 2006 and stuck, despite his ongoing antagonism with the North Ward Democratic Committee.

“I support all my colleagues,” he assures, when asked about North Ward Councilman Anibal Ramos, who’s also part of the Booker behemoth.

“Am I closer to some of my colleagues than others,” asks South Ward Councilman Oscar James II. “Yes, but this is my team, and I will work as hard for this team as any other team. I was taught at a very young age that politics creates strange bedfellows.”

James, of course, is facing arguably the stiffest test down in the sprawling South Ward, where activist (and son of poet Amiri Baraka) Ras Baraka plans to mount an aggressive challenge in front of this year’s May 11th municipal contest.

But there are other challengers to the Team.

“I was the first one down here picking up petitions today,” said optometrist Peter Pantoliano, who’s running against East Ward Councilman Augusto Amador.

Amador walks in with Quintana and Booker.

“He says he’s proud because he’s not corrupt,” says Pantoliano, standing there with petitions under his arm to one side of the Booker political bulk that’s just arrived, and which now dominates the hallway outside the clerk’s office.

“To me it’s corrupt when you on the job and continue to collect a pension when you’ve passed the point of being effective, that’s corruption,” adds Pantoliano, who, like Amador, must collect 151 petition signatures in the East Ward in order to qualify as a candidate.

The door to the clerk’s office opens and a young woman with a fur collar propels herself on high heels into the crowd of people here and comes face to face with a placid looking Booker, who’s seated at the edge of the crowd.

They exchange looks of apparently no great consequence.

But Mirna White of the Central Ward – and that’s who this is – is running for mayor.

“Crime continues to rise,” she says. “The unemployment rate is unacceptable in Newark.”

She makes her way through the crowd of Booker allies and sprinklings of other antagonists – and skidoos.

Among the unfriendlies to the Booker cause stands Victor Zamora, a 62-year old veteran of the recreation department, who’s worked for the City of Newark since 1969.

Fed up with the Booker administration, he’s running for at-large councilman.

“The only way to change this city is to start with bottom up candidates – like me,” he says.

“I don’t take it personally at all,” says Quintana. “Victor’s entitled to run. It’s a free country.”

“There may be a groundhog candidate out there – you know, people who pop up at election time – but most of the time, those candidates are only looking for a spotlight, that’s not leadership,” says Rice, whose father’s portrait hangs on the wall in city council chambers just one floor below.

They’re ready to go now, and Booker leads the way into the clerk’s office. Each mayoral candidate must obtain 1,342 valid signatures and submit them by March 18th in order to qualify to run. At-large candidates need to collect the same number.

Moments later, with councilmembers still crowded into the antechamber of the clerk’s office and signing their names, Booker bounds out of City Hall and resurfaces at 311 Washington Street for a press conference on crime.

In front of a packed crowd, including activists and allies, and accompanied by Newark top cop Garry McCarthy, Booker rattles out a presentation of diminished crime figures in New Jersey’s biggest city. 5,874 fewer victims of crime over the course of the last three years. 406 fewer shooting incidents. 78 fewer murder victims. 44% reduction in overall auto thefts since 2006.

Veteran West Ward activist Donna Jackson stands in the back of the room shaking her head.

“Too bad very little of that is true,” she says. “I don’t know who I’m supporting for mayor yet, but it won’t be him. I love Cliff (challenger Clifford Minor) but Cliff needs to get a little stronger for me to get excited about his candidacy.”

Askd if she intends to run for anything, Jackson shakes her head no.

“I’d have to give up my day job,” she says with a grin. “We need to have people on the outside who can organize.”

In the meantime, based on all outward appearances, not least of which is the fact that the entire city council is running with him, Booker is plenty organized – from within. 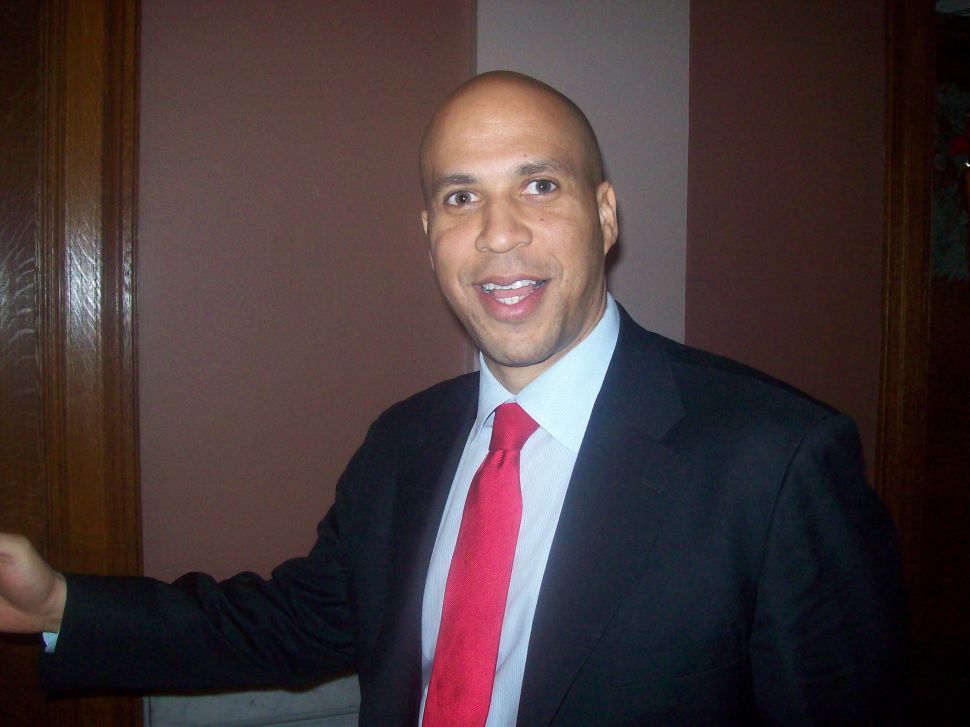