Joe Cardwell, a well-connected Jersey City political consultant who was arrested in July along with 43 others on corruption charges, was indicted today for allegedly taking bribes in order to influence a city official.

The indictment charges that Cardwell accepted a $10,000 payment from Solomon Dwek, an FBI informant posing as a crooked developer, to make introductions to officials who could speed through zoning approvals for a purported residential high rise development on Garfield Avenue.  At a later meeting, according to the indictment, Cardwell took another $20,000 from Dwek — $10,000 for himself and $10,000 for someone identified in the indictment only as “JC Official.”

The official, who Cardwell allegedly described as “my guy,” turned down Dwek when he tried to hand him $10,000.  According to the July criminal complaint against Cardwell, the official, who in that complaint was identified as “JC Official 3,” “told the CW that he did not do that, and that the CW should deal with defendant Cardwell, who knew both JC Official 3 and the mayor. JC Official 3 told the CW that there would be events and tickets and that defendant Cardwell knew the “playing field.”

Cardwell then allegedly accepted the money intended for the official, and later told Dwek that the official had requested that Cardwell use the money to purchase tickets for a political fundraiser.

Although not identified in the indictment, PolitickerNJ.com named the Jersey City official in July as Carl Czaplicki, a former chief of staff to Jersey City Mayor Jerramiah Healy who heads up the city’s Department of Housing, Economic Development and Commerce.  Czaplicki has not been charged with a crime.

Cardwell is an alternate commissioner on the Jersey City Municipal Utilities Authority and was the chief political consultant for state Sen. Sandra B. Cunningham (D-Jersey City).  In September, Cardwell, Cunningham and newly sworn-in Senate President Stephen Sweeney (D-West Deptford) were spotted eating together at the Liberty House Restaurant, where guests trickling out of a fundraiser in the next room reported Cardwell handing them cards for his legal defense fund.

The single count indictment against Cardwell carries a maximum sentence of 10 years in prison and a $250,000 fine.

On his way into federal court on the morning of his July 23 arrest, Cardwell, surrounded by photographers, basked in the attention.   “Like a rockstar,” he said. 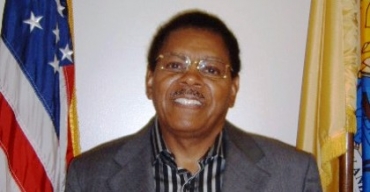