TRENTON – There are three sitting legislators who have been indicted on corruption charges, but only one of them is here today.

“I have only one wish: to be exonerated and fully restored to all my capacities as an assemblyman,” said Assemblyman Anthony Chiappone (D-Bayonne).

Chiappone, who was charged in August with allegedly funneling a legislative aide’s paychecks into his personal and campaign accounts, sat at his desk and cast votes – despite having been stripped by Assembly Speaker Joseph Roberts (D-Camden) of his pay and committee assignments.

The two other indicted assemblymen, L. Harvey Smith (D-Jersey City) and Joseph Vas (D-Perth Amboy), met with the same punishment.  But, unlike Chiappone, neither has shown up since their indictments, and neither is going to be sworn in for a new term tomorrow.  The conventional wisdom is that they have only remained in the Assembly so as not to give the appearance of an admission of guilt.

Despite the sanctions, Chiappone, who has pleaded not guilty, said his fellow legislators have treated him respectfully.

“I actually appreciate the show of respect and consideration I’ve been given by my colleagues,” he said.

Chiappone said that he is trying to convince the new assembly leadership to give him back his committee assignments and pay.

“There have been discussions on those issues and I’m looking forward to the inauguration tomorrow…. My aim is to get my situation resolved, and back to full restoration of work.” 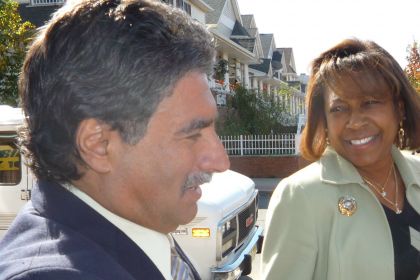