Simpson was federal transportation administrator under the Bush administration, from 2006 to 2009.  Weinstein is a former DOT commissioner and vice president of the engineering and architectural firm AECOM.

Christie said Simpson’s national and regional experience provide him with the “appropriate vision” for the job.  Weinstein, Christie said, has a “wealth of experience in state government and a number of different levels.”

Simpson and Christie both pledged that they would try to solve problems with the nearly bankrupt Transportation Trust Fund without raising gas taxes.

‘I’ve had extensive conversations with Jim Simpson and Jim Weinstein about the Transportation Trust Fund situation, and again, we’re not going to be raising the gas tax,” he said.  “Their charge is to figure out how we’re going to fix this without raising the gas tax.”

The 63-year-old Weinstein headed the Department of Transportation from 1998 to 2002, under Govs. Christine Todd Whitman and Donald DiFrancesco.  He was the DOT Chief of Staff under Gov. Tom Kean, and headed Kean’s authorities unit.

Simpson, a former tractor-trailer driver, served as Commissioner of the New York State Metropolitan Transportation Authority under Gov. George Pataki from 1995 to 2006.  After the September 11, 2001 terrorist attack, he was designated as the MTA Board liaison in coordinating transit issues at the World Trade Center site. 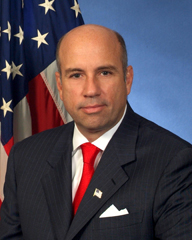