Acknowledging body slam bruises from the last couple of elections, Assemblyman John Wisniewski (D-Sayreville) at the Forsgate Country Club in Jamesburg accepted the unanimous support from members of the State Democratic Committee to be the party’s next State chairman.

“In my 14 years as an assemblyman, the unease in the public right now is unlike anything I’ve ever seen,” said Wisniewski, who tonight officially became the new forward line face of a party that claims more registered members than the GOP, but just saw Gov. Chris Christie unseat Jon Corzine.

The lead factory worker’s son from Sayreville turned attorney admitted that right now, the public “questions whether we get what they’re feeling. They see healthcare reform and asset monetization and they see more government, more costs, and more rules.”

Unafraid to “soul search” as Adlai Stevenson advised in the 1950s – and those were Wisniewski’s words –  the new party chairman said, “I’m a Democrat because I believe that government must supply a safety net.”

As Wisniewski’s speech turned inward, probing and inquistive in a vowed quest for new ways of outreach, research and fundraising, Sweeney, and the seldom podium soul searching Cryan, scrappy as a tireless chairman who tonight received two standing ovations for his work, chatted audibly.

Turning to party battles, Wisniewski promised to fight in Passaic to preserve the Democratic majority and beat back a 2009 Republican resugence, defend U.S. Rep. John Adler’s (D-Cherry Hill) seat, and – and this was a either a clear case of lowering the bar or simply providing an amiable shout-out to the visible Essex County presence in the room – winning county executive races in Bergen (indeed, a fight, by the reckoning of most political observers) and Essex (no Republican challenger and none on the horizon in what appears to be a walk for Essex County Executive Joe DiVincenzo).

While acknowledging the tough terrain, Wisniewski finally projected optimism through the gloom.

“Democrats must continue to build upon the great efforts of Chairman Cryan to grow and diversify our party,” he said. “… We must remember that New Jerseyans voted overwhelmingly for change in 2006 and 2008 and re-elected all of our incumbent Democratic Assembly members last year to retain our majority in the legislature.”

He also threw a jab at the opposing party, although kept it general and out of range of the new GOP command structure in Trenton topped by Christie.

“After the disastrous run of Republican leadership that sunk our economy into crisis, New Jersey voters sent Democrats to Washington and Trenton because they trust us as the party that fights for working families against the special interests,” Wisniewski said.

Oliver roger wilcoed that when she briefly addressed the committee.

“Don’t let the pundits and Fox News turn you around,” said the Assembly Speaker.

On Thursday morning, Assemblyman Jay Webber (R-Morris Plains), chair of the Republican State Committee, issued a response to the news coming out of Jamesburg.

“I congratulate Assemblyman Wisniewski and wish him well in his new position,” said Wisniewski’s GOP counterpart. “I hope that the new chairman will join his fellow Democratic leaders in partnering with Governor Christie to make New Jersey affordable for our families again.” 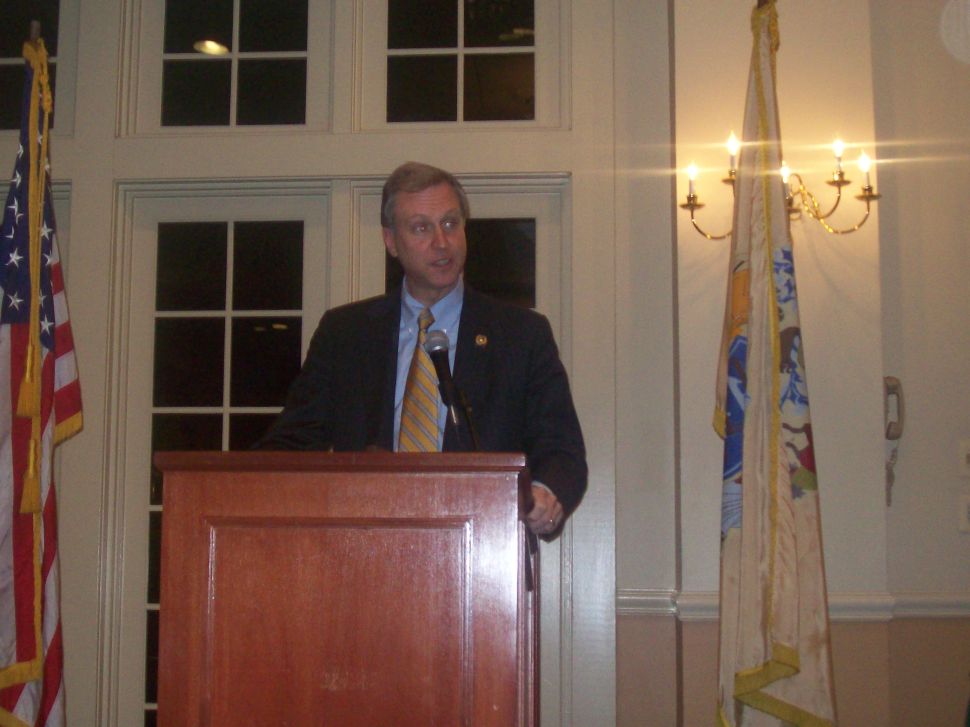