“Bergen County residents now they are overtaxed, under-served and sadly ignored by the current county executive,” said Donovan in front of a crowd of about 300 at the Bergen County Republican Organization’s headquarters.

That current county executive is Democrat Dennis C. McNerney, a two-term incumbent whose first election in 2002 helped usher in an era of Democratic dominance that Republicans have reason to believe is starting to ebb, having just last week sworn in two freeholders, giving the board Republican representation for the first time since 2006.

Donovan, who was first elected county clerk in 1988, said she reduced that office’s operating budget and “cut costs in the face of tight budgets.”  She said she would slash spending as county executive.

“Government is about to get smaller, and I pledge to propose fiscally responsible budgets that hold the line on county property taxes,” she said.

Bouyed by the freeholder victories and that of Republican Gov.-elect Chris Christie (who narrowly lost this county), Bergen Republicans think Donovan – who has run for county executive twice before but failed to win the party’s nomination — has a good shot at toppling McNerney.

Republicans tonight touted unity in a party that has been plagued by infighting for years, most notably between Donovan, state Sen. Gerald Cardinale (R-Demarest) and Chairman Bob Yudin, who introduced her tonight.

Cardinale, who remained open to supporting other candidates until this month, officially endorsed Donovan, saying that Bergen County residents were “suffering” because the GOP was “not united.”

“We’ve been fighting amongst ourselves.  And we’ve stopped doing that,” said Cardinale.  “The people of Bergen County are going to benefit because we have got our act together.”

“Do you feel it?  I certainly feel it.  I haven’t felt like this since the days of Tony Statile,” said Cardinale, referring back to the chairman who presided over the party more than 40 years ago.

When Yudin, in his introductory remarks, said that he and Donovan were “on the same page,” the room erupted in applause.

Advisors on both sides of the former party divide insist that the peace is real and permanent, although Yudin and Cardinale continued to entertain possible alternative candidates to Donovan after former Hackensack Mayor Jack Zisa declined to run.  A number of names were floated until late December, but ultimately none would take up the candidacy.  Still, possible GOP county executive hopefuls have until Feb. 1 to file a letter of intent with Yudin.

Donovan gave Yudin a necktie – a symbolic riff on the Bergen County Economic Development Corporation’s gift of $100 ties to members of its board, which includes McNerney. 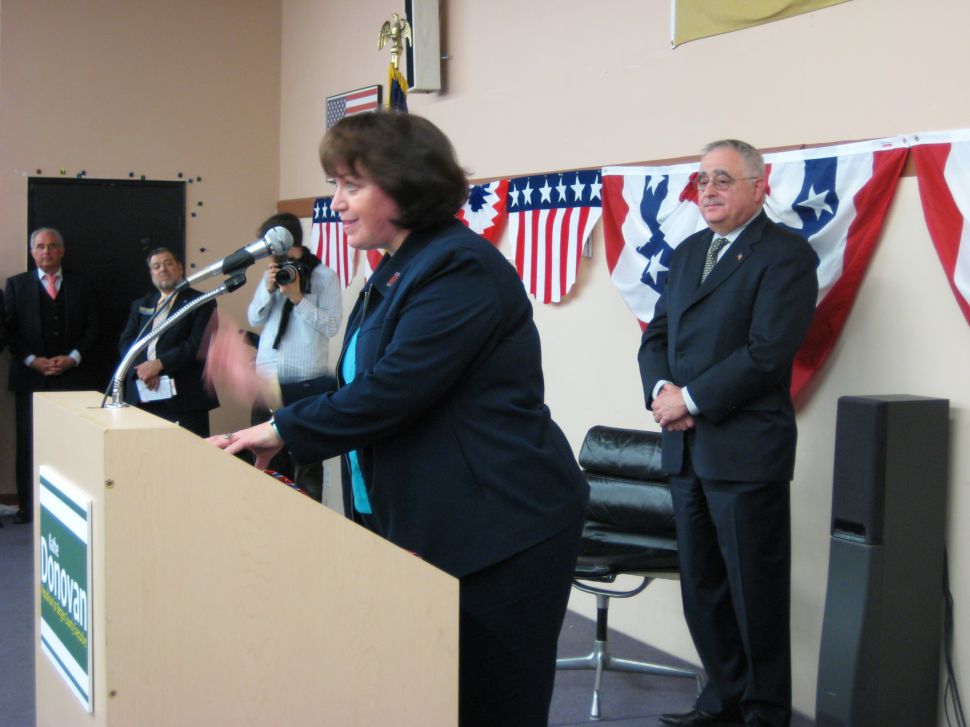