The event is scheduled to take place at Bergen County Republican headquarters in Hackensack at 6pm.

“I think the experience I have gained over the time I’ve been in office gives me a good perspective on what I’d like to do and what I’d like to see done for the people of Bergen County,” said Donovan, who was first elected as clerk in 1988.

Since former Hackensack Mayor Jack Zisa decided not to run, no candidates have surfaced as contenders to Donovan for the Republican nomination – although Donovan and some party leaders, including Bergen GOP Chairman Bob Yudin and state Sen. Gerald Cardinale (R-Demarest), have a checkered history.

Yudin was cautiously optimistic that the party could unify around Donovan without any discord.

“All I can say to you is this: Kathe reached out to me and asked if we could talk.  We’ve been talking for weeks now, both one and one and with our advisors,” he said.  “The talks have been very positive. We’re attempting to work it out so that we’ll be a united Republican Party in the November election.  We’re still talking, and I’m very encouraged that the talks have been very cordial and positive.”

Yudin said that he will likely introduce Donovan at the event.

“She has asked me to do that and I have agreed to that.  But it’s not final,” he said.  “I will allow anyone who wants to use headquarters and will introduce anyone who asks me.  Whether it goes any further than that depends on how the negotiations go.”

This will mark Donovan’s third attempt to run for county executive, but the first time that the Republican field appears clear.  In 2002, she ran in the convention for the party’s support but lost.  In 2006, she narrowly lost the Republican primary to Todd Caliguire, who lost to McNerney in November. 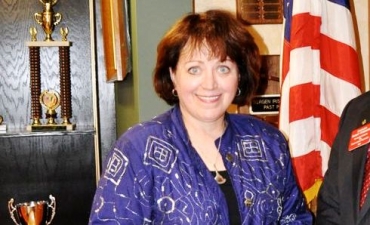