PATERSON – Council President Jeff Jones doesn’t see the vision of doom gathering in the candidacy of fellow mayoral candidate Andre Sayegh, the ward six councilman who today saw his petitions certified and who wants to turn the contest into a conflagration between incumbent Mayor Jose “Joey” Torres and himself.

Jones contemplates his own vision of Paterson, the city where he was born and raised.

“It’s so early, it means absolutely nothing at this point,” Jones said of his rival’s achievement today. “He turned in some papers, let’s try not to get too excited.”

Intent on going after Torres at his own pace and with his own set of arguments, Jones sees himself as emphatically the alternative to the incumbent and rightful purveyor of a people power message.

But the candidate also doesn’t settle for sound bites, and that may prove to make Jones, if not the most enigmatic mayoral candidate on the Paterson trail this season, perhaps the most challenging.

An ex-Marine who pulled duty in Europe and the Middle East in the late 1970’s and early 1980’s and served as a crewmember of assault amphibious vehicles, Jones the political science professor and emergent political leader cuts a complex figure on a ward-scape that Torres and Sayegh are early attempting to control with guile and pragmaticism (Torres) and energetic sloganeering and accelerated work-rate (Sayegh).

Ask him to talk about why Torres’s emphasis on development has been damaging to Paterson, and instead of spitting back a simple sentence answer, Jones reaches back to the beginnings of western civilization for context.

“Even in nomadic cultures, the fire at the center is what draws people back to the circle, to one another, to community,” says the candidate. “Ever since I can remember in Paterson, mayors have built these towers believing that they would show outsiders some competence we possess and convince them to come, but in so doing we have forsaken creating and kindling that fire at the heart of our own community of Paterson: recreation and education.

“Many of these building projects preclude us from the very fire of culture we’re seeking,” he says. “That’s why I’m running on a people agenda, a north star agenda. That north star ain’t happening right now for Paterson. People are dying. People have no place for recreation, for healthy interaction. They have no place to open their own business. We have these big projects (like the City Center construction effort launched during the Torres years), but we’re not building people. We’re developing, but not building citizens. Rather than rely on these outside forces, we need to empower the resources we have.

“For as long as I can remember in Paterson, we have always sought that other city – that place beyond. We’re always reaching for that brass ring somewhere else. I was just talking to a young man the other day who said he wants to move to Boston. He’s never been to Boston, but it’s that beyond. We need that dream here, that north star, that fire, rekindled right here. I told him to stay here in Paterson. We need his enthusiasm here.”

To those seeking an uncomplicated candidate, one who’s taken Paterson’s irreconcilables and packaged them in simple ringing phrases, Jones doesn’t deliver.

For if his Marine Corps background and criminal justice degree give him on the one hand a squared away profile, he also has a reputation as a severe critic of the police department and aggressive defender of the accused.

“Many people want to do the law enforcement thing, but where in protect and serve does it also say ‘and find guilty?’ says the council president. “It’s your job as a police officer to collect the facts, write up and submit your report, but not to find guilty. I’m just gut-checking what’s going on out there.”

He still sees the somewhat segregated city of his childhood, little changed in many regards from the place he knew before the corps.

“I remember when I was a kid, I walked up to Eastside Park, and a policeman stopped me and asked me what I was doing in that neighborhood, and I told him I was going to the park,” Jones recalls. “He let me go. I walked into the park, and he drove away, but that stuck with me.

“There were two instances in the Marines… I was working as an amtracker, and this Marine Navy ship caught on fire, men died. I didn’t have to come back. But I have been protected. I didn’t return to the hometown I love, I wasn’t brought this far back just to sit around. I know the deals politicians make but they underestimate the citizens. You will see people change their positions. If you criticize the mayor and then suddenly defend him now that we’re in a campaign, that’s your conscience not mine. I will speak, as I always do, to what I see.” 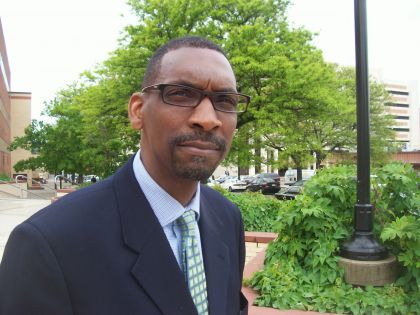