If confirmed by the state senate, Eristoff will take the helm of the Department of Treasury in the face of a budget deficit that is expected to be anywhere from $6 to $10 billion.

“The way that we’ve been going for the last decade or more has proven to be a failure,” said Christie while introducing Eristoff at Seton Hall Law School.

Eristoff, 46, lives in Manhattan but said that he plans to move his family to New Jersey.  He kept his remarks brief and made a request to reporters to go easy on him for today.

“I would ask that before you attempt to stump me with arcane financial questions, that you allow me just a few hours, if not days, to be fully briefed up on the minutiae of New Jersey’s current circumstances,” said Eristoff, a city councilman from 1992 to 1999.  He was New York City Commissioner of Finance under Mayor Rudy Giuliani, from 1999 to 2002, and Commissioner of the New York State Department of Taxation and Finance under Gov. George Pataki from 2003 to 2006.

Eristoff did say that he was looking to institute a “fundamental restructuring and reform of New Jersey’s state finances” and that the job gave him “an incredible opportunity to serve at the front lines of what I believe will be a nationally significant movement to restructure state government as we know it.”

Since his nomination of Paula Dow as attorney general and Lt. Gov-elect Kim Guadagno as secretary of state, all of Christie’s cabinet appointments so far have been white males, drawing some scrutiny from reporters.  Eristoff, for instance, is the descendent of Georgian nobility (the Eurasian republic, not the American state), a Princeton alum and great-grandson of a business partner of Andrew Carnegie, according to his 1996 New York Times wedding announcement.

“I’m not going to take a ‘Noah’s Ark’ approach to filling my cabinet. I’m going to look for the best possible people I can find,” said Christie, who maintained that diversity did factor into his decisions.

Christie also announced that he will create a Council of Economic Advisors by executive order the day he takes office, on Jan. 19.  Its chairman will be Bob Grady, a former executive at the Carlyle Group who has been a co-chair on Christie’s Transition Task Force on Budget and Taxes.  Former Prudential CEO Art Ryan will also serve on the council.

Christie named Alfred Koeppe, the president and CEO of Newark Alliance and former head of PSE&G, to his second stint as chairman of the New Jersey Economic Development Authority.  Koeppe will also serve on the council of economic advsiors.

“This is a strong — very strong — very experienced core group of budget, tax and economic advisors,” said Christie who expressed the gravity of the state’s dire fiscal condition by warning against expecting miracles.

“I didn’t mention anything in their biographies about any of these three folks standing up here being magicians.  They’re not,” he said.

In keeping with his campaign rhetoric, Christie indicated that state workers will have to give up the tip-top benefits they’ve enjoyed.  He noted that he had been paying $1,200 a month through COBRA for his family’s health insurance plan since leaving his post as U.S. Attorney.

“We now have, through the State of New Jersey, full family medical coverage, dental coverage and vision coverage for $100 a paycheck.  $2,600 a year. I’ve got to tell you. It’s not sustainable. It’s not competitive,” he said.  “We have to bring New Jersey state government into the real world, and that’s not the real world.” 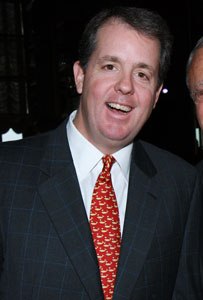