Venture capitalist Scott Sipprelle brings financial oomph and a deep resume to the 12th Congressional District race, but his path to the Republican nomination is far from clear.

Fair Haven Mayor Michael Halfacre, who has been laying his own campaign’s groundwork for close to a year and has raised about $60,000 so far, does not plan to roll over for the wealthier candidate.

“I am fully committed to this race. A big checkbook is not going to scare me off,” said Halfacre in a phone interview.

The contest has the makings for an intensely competitive primary to earn the right to run against U.S. Rep. Rush Holt (D-Princeton) in the general election, which will be a tall order for any Republican.

Neither candidate can claim the full support of the Republican establishment, and the contest pit some of the state’s top Republican consultants, fundraisers and pollsters against each other.

Halfacre’s campaign is managed by Tom Fitzsimmons, a strategist central to the 2007 victory of then-Assemblywoman Jennifer Beck’s (R-Red Bank) over state Sen. Ellen Karcher (D-Marlboro).  His finance chair is Larry Bathgate, a prominent national fundraiser who was a finance co-chair of John McCain’s presidential campaign, and he’s hired The Traz Group to do his mail pieces.  His pollster is Adam Geller, who did the internal numbers for the campaign of Gov.-elect Chris Christie.

Sipprelle has brought on Chris Russell – who used to work for the Traz Group – as his general consultant, and has hired Jamestown Associates, a prominent GOP firm that did Christie’s direct mail, for his media campaign.  His pollster is Jim McLaughlin, who has worked on many high profile New Jersey campaigns.

Halfacre said that he first heard that Sipprelle was weighing a run about three weeks ago — unwelcome news for someone who had long been toiling on the campaign, attending small Republican gatherings and chicken dinners.

“I started hearing rumors three weeks ago that there was a Wall Streeter sniffing around the race from Princeton. I found out his name and met him,” said Halfacre.

When asked if he felt the sudden entrance was unfair, Halfacre said “I don’t know if unfair is the right word.”

“I consider this my district and I’ve been working very hard to make it my district.  I’ve been out crisscrossing this district for months,” he said.

A written statement released by Halfacre this afternoon recounts what the two men discussed when they met, and hints at the tone his primary campaign will take

“As I told Mr. Sipprelle when we spoke, I don’t think a self funded Wall Street millionaire is the right candidate to defeat Rush Holt in the current environment. Often the messenger is just as important as the message,” said Halfacre.  “I’m confident that as a small businessman who became mayor of my hometown, with a proven record of cutting spending and taxes, I am the best person to represent the 12th District and defeat Rush Holt”

Holt has easily won every election since he narrowly defeated Dick Zimmer in 2000.  In last decade’s redistricting, which made all 13 of the state’s congressional districts safer for the incumbent party, the district lost portions of heavily-Republican Hunterdon County from his district and added part of Trenton, making it more Democratic.  Demographic shifts also favored Holt, and the district now has 148,000 Democrats to 82,500 Republicans (212,700 voters are unaffiliated).

But there has been Republican chatter about defeating Holt if the circumstances are just right: for instance, a national Republican wave equivalent to 1994.

“He never deviates from the Democrat’s message.  Never once,” said Middlesex County GOP Chairman Joe Leo, whose county is one of five in the congressional district.  “He votes the party line all the time, and that party line is not popular.”

But Monmouth University pollster Patrick Murray said that was like “waiting for lightning to strike.”

Murray noted that the district’s boarders are likely to change significantly when they’re redrawn next year, and that the candidates could stand to gain by making a name for themselves now in preparation for a run in a future district that could be friendlier to Republicans.

“But you’ve got to avoid walloped,” he said.

Hunterdon County Chairman Henry Kuhl said he has met with both candidates and came away slightly more impressed with Halfacre’s preparations.

“I don’t say that I have a preference yet, but my observation is that Halfacre seems to have a better plan of a campaign,” he said.

Holt responded to news of his two challenger-hopefuls with a brief statement.

“I think the residents of Central New Jersey recognize that as their representative I understand their concerns and work diligently to address their needs, study their issues, get to the point, and advance legislation that promotes opportunity, ensures fairness, and builds communities,” he said said. “I continuously hold out my record for examination – one based on results, not partisanship.” 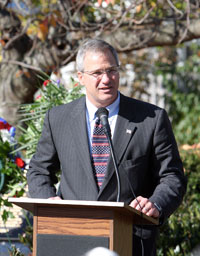