Mercer County Freeholder Keith Hamilton will launch his campaign for mayor of Trenton tommorow at the Amici Milano Banquet Hall, one of 11 candidates jockeying for position in the coming absence of veteran Mayor Douglas Palmer.
“I’m going to be getting my message out and motivating people to get to the polls,” said Hamilton, 54, vice president of Community Relations at SERV Behavioral Health System, Inc.
A 14-year member of the freeholder board, the early off-the-record knock on Hamilton from his rivals is he only recently moved back to Trenton after living in neighboring Hamilton Township.
“My response to that is I was born and raised in Trenton,” he said. “I left to fight for my country and now I’m back to fight for Trenton.”
Hamilton served five and a half years in the Air Force.
His allies figure a moral advantage he will have over the other candidates trying to shoulder their way to the front of the pack is the fact that Hamilton doesn’t draw his primary income from a public job.
“I think it’s significant because it says I’m not here to protect the way government is run – it says I’m there to make the serious and honest wholesale changes,” Hamilton said.
“I grew up in Trenton and it is not the city I left,” he added. “The jobs are gone and the stores are gone. I don’t know that the current administration has done a good job. The first thing we must do is raise the level of safety and security.” 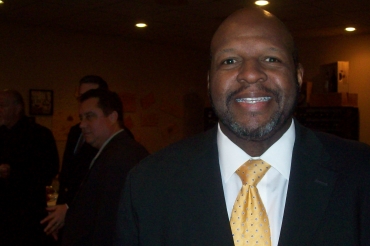