PATERSON – It’s an old political ward trick: campaign in the vicinity immediately around the property of the target, in this case incumbent Mayor Jose “Joey” Torres, whose pickup truck stands in front of his house as Ward 6 Councilman Andre Sayegh bolts up Chamberlain Avenue in an unabashed door-to-door exercise of a Paterson ritual.

“I really don’t have too many complaints living here in the 2nd Ward,” a woman tells Sayegh when he stands on her front steps. “The mayor lives right over there, so the streets are always clear when it snows.”

“When I’m mayor, I’ll have to move onto your block to make sure the streets get cleared around here,” cracks the councilman, who extracts a signature from the woman despite her mostly favorable impression of life with Torres in this ward.

“I moved here from the other side of town, where it wasn’t so good,” she admits.

Never left hovering wordlessly at the edge of an opportunity to package atmosphere and mood into one reference-laden sound bite, Sayegh blurts, “It’s a tale of two cities. We want one city.”

He sprint-walks up another block with arm outstretched and friendly smile jutting just behind it at the sight of a pedestrian walking her dog, but when the woman’s face behind sunglasses lifts and makes close range eye contact with the candidate, he relents.

“I already got your signature,” Sayegh says with a grin.

The sweater-clad lapdog waddling double-time at the end of its leash and going nowhere as it tugs at the woman’s arm suddenly catches Sayegh’s eye.

“Is your dog registered to vote?” he asks.

This is Sayegh, already certified as a mayoral candidate and still seeking signatures anywhere he can. The former school board president with a Masters of Public Administration from Columbia University built a reputation as a youthful and relentless campaigner on his way to crushing his opponent in the 2008 council race, 1,031 to 380 votes. If his more senior colleagues on the council now quietly jeer at his mayoral run as the political stylings of a Booker-Cammarano-Fulop-Choi-Obama glitzer in times that call for elder statesmanship, the candidate likes to believe he has a habit of dissolving the enemy’s contempt week by week into a demonstrable case of political complacency.

It happened in that 2008 campaign.

A highly respected, street-level social worker with some quiet backing from the mayor, Illa Villanueva derided Sayegh as a youngster still living with his mother and inacapable of understanding the real world. A grinning Sayegh hit back by simply outhustling his rival, organizing handfuls of Dominicans that morphed into larger pockets that gradually turned Sayegh – not Villanueva – into the Dominican candidate and starkly contrasted sour grapes with vitality.

Now, with Torres (a two-term veteran who in 2002 ousted GOP Mayor Martin Barnes before the feds packed Barnes off to the pokey on corruption charges) and fellow mayoral challenger Council President Jeffrey Jones respectively embodying citywide Latinos (50%) and African Americans (33%) as starting points in this 2010 season, Sayegh knows he has to pry every loose vote out of each of the city’s six wards.

“We’re on the ground everyday banging on doors, and in addition we’re on the web, with a website and two Facebook pages, combining technology and street presence,” said Farhanna Balgahoom, Sayegh’s fiance, who’s just as possessed as the candidate when it comes to projecting political animal energy.

Part of the effort includes getting Sayegh exposure.

This weekend alone, he landed News 12 television time sounding off on the census, talked to PolitickerNJ.com for this story, and surfaced almost inexplicably with a quote in a Herald-News story putting in context the race among 17 contestants for three council at-large seats, one of which is vacant as Jones joins Torres and Sayegh in the quest for mayor.

Through it all there is the off-the-record fuming from older or more experienced council people.

“Where are the accomplishments from this kid?”

Sayegh believes Paterson legitimately needs the money, but also thinks he would be better positioned to respond to an aggressive incoming Republican governor than would Torres, who was so closely tied to Corzine for four years.

“You can’t put all your eggs anymore and rely on the state to the degree we have,” says Sayegh. “As mayor, I would require every department to have a performance audit. We do need the money, but we can’t operate by the seat of our pants anymore. Chris Christie has been very clear. We’ve got to grow up.”

Torres over the course of his tenure landed box store and retail development in Paterson, but Sayegh says he wants to enhance the city’s investment in abandoned properties.

“There’s a way to generate revenue,” he insists.

Moments prior to making the pitch to the woman’s dog, with 16 weeks to go in this contest for the right to run Paterson, the Ward 6 freshman councilman and his campaign volunteers – a Patersonian cross-section with Yusef Kansay, Javier Fernandez and Vera Spencer among them -huddle in the living room of Kevin and Kathleen Long and divy up the blocks they’ll walk before heading for the streets.

A veteran of the 1996 Clinton-Gore campaign when she was an undergrad at Georgetown University, Sayegh’s field director Kathleen Long,  formerly director of Development and Alumni Relations with the US-Ireland Alliance, lends his campaign some solid credentials.

“The best and the brightest,” says Sayegh. “She is a major part of the new generation of leadership in Paterson.”

As the younger candidate exhaustively canvasses on Saturday, leading one of several two-by-two teams around the western Totowa neighborhood, the voice of Council President Jones sounds over a cellphone.

“Andre’s working hard, he is,” admits the rival mayoral candidate, who says he’s been simultaneously pounding on doors all day too as he scours the city for his signatures.

Whether Sayegh’s work rate will translate into something more than muscle flexing on a map already demographically dominated by Torres and Jones and tilted heavily toward Torres especially since At Large Councilman Rigo Rodriguez announced last week he would be pursuing a second term as a councilman and not the mayor’s seat, “It’s too early to tell,” says veteran Councilwoman Vera Ames.

As the campaign moves on Chamberlain, everyone in the small group of Sayegh allies and attendant reporters and activists momentarily coincidentally finds him or herself facing away from the Torres house, and when Sayegh is the first to glance back at the corner stucco eminence, he does a double take.

The pickup truck is pulling away, with the mayor, otherwise undetected, evidently behind the wheel, moving with no great urgency as Sayegh turns in the opposite direction on this compact block of bungalows, and heads speedily toward the next door. 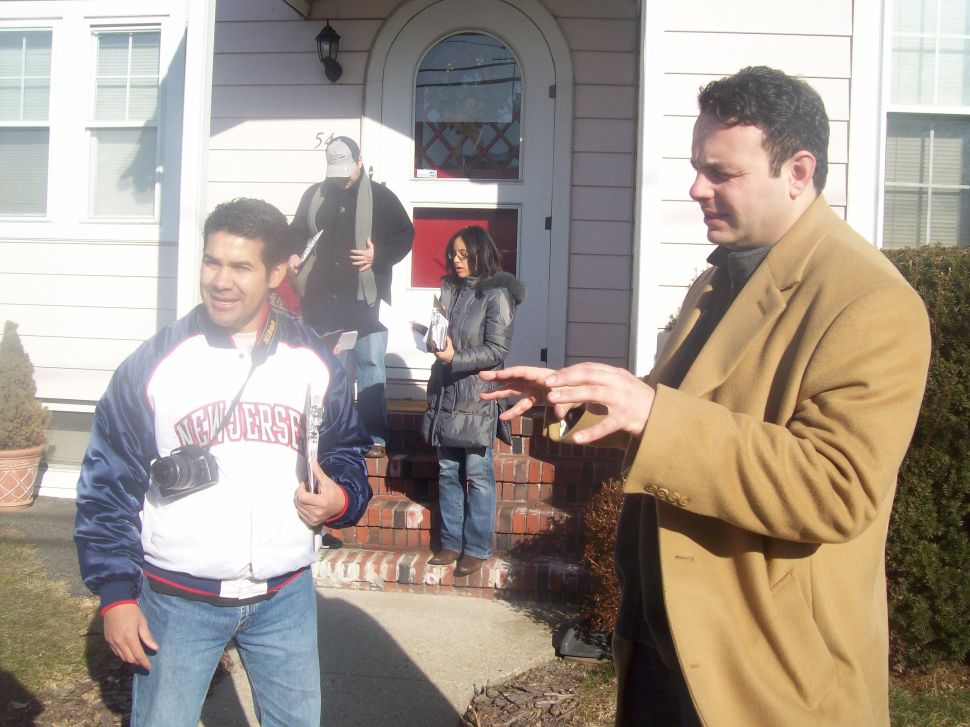