Assemblyman Samuel Thompson (R-Old Bridge), who chaired the Middlesex County GOP in the 1980s and 90s, hopes take back the party’s top post in the wake of Chairman Joseph Leo’s decision not to seek another term.

The retirement and new candidacy were both announced at the Middlesex GOP’s holiday party last night.

“I pledge that as County Chairman I will work tirelessly to build the strength of our organization, to significantly increase our fundraising to solicit the best possible candidates and to build a Republican organization in Middlesex County capable of winning elections at all levels,” said Thompson in a written statement.

Thompson, 74, also announced that he has the support of all 25 of the party’s municipal chairs.

Middlesex County has been a Democratic bulwark in recent years, but went for Republican Gov. Christopher Christie over Democratic incumbent Jon Corzine in November. Thompson chaired the party between 1986 and 1994, during which they elected a Republican county clerk and won a majority on the freeholder board.

The Middlesex County Republican Organization will elect a new chairman at its June reorganization meeting, which will take place on the same Tuesday of the month.

Conservative activist and blogger Michael Illions is the only other announced candidate for chairman.

“I’ve been long against elected officials being party leaders, because I think it’s a conflict of interest when they have their own elections to worry about,” he said. 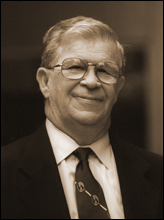