TRENTON – In the aftermath of the state senate’s defeat of marriage equality last week, a Facebook group wants the political scalp of at least one lawmaker, launching a page this weekend singling out the Republican senator from Wall with the “shame” tag and vowing to “Unseat Sean Kean.”

Claiming 968 fans and counting as of this afternoon, the page listing Paul Vail as a committee member contact says “Senator Sean T. Kean betrayed his constituents by voting against marriage equality (S-1967). The Committee to Unseat Sean Kean will work toward his defeat in the 2011 election.”

“We weren’t surprised by the vote, but we were outraged by the speech,” said Thomas Mannix, a software company management consultant and one of three core committee members along with Vail and Tim Horn, all of Asbury Park.

“I think he was trying to come across as a reasonable guy in his speech, but instead, he infuriated people,” said Mannix, who described “Unseat Sean Kean” as a bipartisan group dedicated to ousting the first term incumbent in 2011.

“Sean Kean doesn’t represent a section of his constituency,” Mannix said. “We have no candidate yet, but we are willing to talk to candidates in either party or in any party. We’ve just started and people are already opening up their wallets. Remember, the vote was on Thursday, and phone calls started on Friday. We’re moving quickly to capitalize on the disappointment and frustration.”

Kean admits his 11th District is likely the gayest in the state, but after a soul-searching floor speech in which he angrily derided those who in emails and communiques have bashed him as an opponent of civil rights, he voted against marriage equality.

The senator told PolitickerNJ.com he has no regrets.

“I haven’t seen it yet,” Kean said of the page. “I’m sorry if my speech was perceived as patronizing. I wanted to give the full spectrum of where I was coming from. Maybe I didn’t connect the dots well enough, but I voted the way I did out of respect for the institution of marriage.

“It wasn’t an easy decision,” Kean added. “At the end of the day, the gay community felt really let down. But whichever way I voted, people would have been upset. In the speech, my intention was to address some extremely nasty, aggressive and over-the-top emails.”

A moderate, pro labor Republican from the Jersey Shore in a district that includes gay community enclaves Asbury Park and Ocean Grove, Kean defended his decision to publicly describe the process he went through in finally opting not to support marriage equality.

“I could have voted and not spoken, but if my speaking has stirred up negative feelings, that’s unfortunate,” he said. “I wanted to communicate some compassion. I have no regrets.”

Never did he say he would support marriage for gays and lesbians, he said. At various times last fall he was 95% and 99% certain he would not support the bill if it came to an up or down vote.

“I met with priests and others from the Catholic faith, and in October or November there was a Catholic press release which said I was absolutely committed to voting against it, which was not true,” the senator recalled.

Neptune Township Committeeman Randy Bishop, a Democrat who is gay and who ran unsuccessfully for the Assembly last year in Kean’s district, said he has received numerous requests to join the anti-Kean page, but has not done so, and doesn’t know whether he will or not.

However, he was disappointed by Kean’s explanation and ultimate “no” vote.

“I understand and respect his religion, but I can point to other religions that say marriage is between two individuals,” said Bishop. “Our founders were so careful to craft a wall between church and state and I would have hoped the senator would have seen that distinction and the protections for religious marriages written into the bill.”

Bishop said he didn’t like Kean’s floor remark to the effect that the senator has gay friends, too reminiscent to Bishop’s ear of the anemic civil rights era explanation for inaction: “Some of my best friends are black.”

“I was offended by his demeanor and his attitude, his comments made no sense, but what I could garner from them insulted me,” admitted Bishop.

Part of the reason the committeeman doesn’t know whether he should join the page is it’s his understanding that the effort potentially wants to build momentum for a primary challenge of Kean, an effort Bishop wouldn’t want to be a part of for obvious reasons as a Democrat.

As to whether he would run against Kean in a 2011 general, “The only race I have on my mind right now is my local race for re-election this year, 2010,” he said. 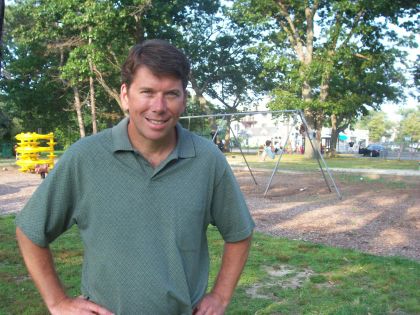