NEWARK – This morning, on the northern end of Newark, Gov.-elect Chris Christie attended the North Ward Center’s Three Kings celebration at the Cathedral Basilica, while U.S. senators Frank Lautenberg and Robert Menendez took turns at a podium in front of the ticket counters at Newark Liberty Airport and called for beefed up security measures at the site of a holiday breach.

“This can be attributed to a management failure,” Lautenberg said of Sunday’s incident, when a man walked through an exit door and left undetected and unidentified.

“An individual wasn’t doing his duty, and you can’t have that kind of breakdown,” added Lautenberg. “We’re not going to have an execution out here, we’re going to make sure we understand what took place.”

Although they haven’t yet in the context of their updated relations – beyond back and forth chest thumping in the newspapers over transit funding, soon the paths of the two Democratic senators will converge with that of Christie.

“We have to work together,” Lautenberg said. “There’s no room for bickering.”

Menendez has the rockier history with Christie ever since the former U.S. Attorney dropped a subpoena on him in the middle of his 2006 senate campaign against state Sen. Tom Kean – a subpoena that could have fragged Menendez’s candidacy, but ultimately went nowhere.

“I called the governor-elect or day or two after he won the election,” he told PolitickerNJ.com. “That’s the only communication I’ve had with him.

“I look forward to working with him,” added Menendez, who’s more than alert to Christie’s empowerment of office.

Up for re-election in 2012, the senator continues to eyeball the Hudson County political landscape with some measure of alarm, according to sources.

Menendez’s allies say he has more pressing matters – homeland security, healthcare, and his duties as chairman of the Democratic Senatorial Campaign Committee – that will enable him to stay out of Christie’s wheelhouse and remain sufficiently occupied in his power center.

As has been exhaustively chronicled by the national media, Menendez’s challenges as DSCC chairman alone – tied as they are to President Barack Obama’s success – potentially pose the sternest test.

Today, he reflected on the news that the U.S. Senate will be losing two veteran Democrats: Sen. Chris Dodd of Connecticut and Sen. Byron Dorgan of North Dakota. “He will be a loss to the Senate,” said Menendez, first considering Dodd. “But we have learned that the attorney general of Connecticut intends to get in, and we welcome him to the race. In North Dakota, we will be reaching out to individuals we believe can be successful.

“These were very personal decisions,” he said of Dodd’s and Dorgan’s impending departures.

The 86-year old Lautenberg, standing beside his colleague, said with a grin, “I don’t believe in retirement.”

But what happens in those states impacts Menendez, whose every loss or victory – whether at home in Hudson or nationally – will be measured alongside the gains or retreats of Christie, as they seek a way to grudgingly interface, and simultaneously attempt to maintain hegemony statewide. 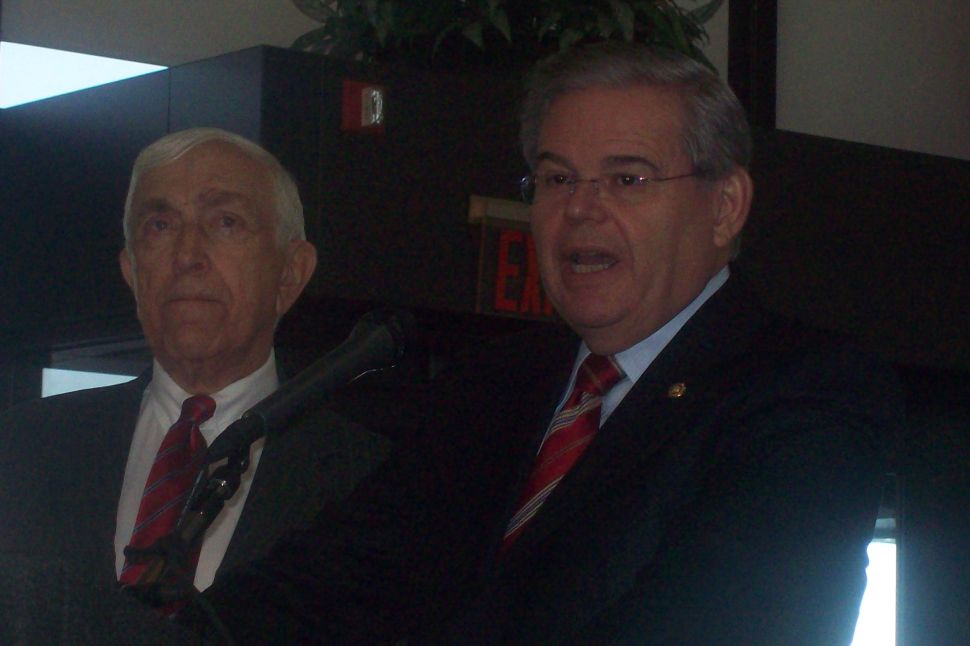