NEWARK – After the early afternoon hoopla from the Booker Team stampede on city hall, retired municipal judge Clifford Minor and his allies went to the clerk’s office at 3 p.m. and quietly picked up their petitions.

“Clifford Minor will be the next mayor of Newark 2010,” Minor told PolitickerNJ.com in a brief statement.

Most observers see Minor as the most serious challenger to Booker, who is seeking his second term as mayor of the county seat of Essex County. 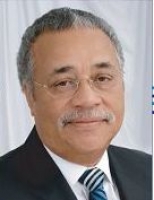