In arguably another chess board positive for Paterson Mayor Jose “Joey” Torres, At-Large Councilman Rigo Rodriguez confirmed today that he intends to seek re-election to a second term on the city council rather than run for mayor of the city.

“If I run for mayor, Joey and I are going to be the two top dogs and the little dog is going to win,” said Rodriguez, in a nod toward the likelihood of a second known Latino getting in the race and potentially dividing the vote with Torres.

The 39-year old businessman’s decision to guard his council seat in an election year rather than challenge a two-term incumbent leaves Council President Jeffrey Jones and Ward Six Councilman Andre Sayegh as the two most visible Torres challengers to date.

Although his move would appear to aid the two-term incumbent mayor, Rodriguez refused to issue an endorsement.

“It’s still breakfast – dinner to be determined,” he said. “I don’t have any consideration toward the administration whatsoever. I know this is politics, but I have principles.”

He left open the possibility of endorsing Jones, Sayegh or anyone else running against Torres.

“I am for the better Paterson,” said the councilman. “Whichever candidate has a good plan for the city is the one I’m for.”

Rodriguez’s re-election bid comes two weeks after 2nd Ward Councilman Aslon Goow – a longstanding foe of Torres’s – announced that he would not run, and all but embraced the mayor’s re-election while not outright endorsing him. 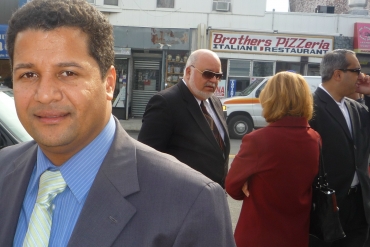