Exhuberant since Tuesday when they learned of Gov. Jon Corzine’s decision to grant clemency to former Newark City Councilwoman Dana Rone and lift her lifetime ban from public office, Rone’s allies this afternoon received a crushing blow when a copy of the parole board order arrived.

“I am disappointed but I’m hoping there’s something we can do,” said the Rev. Pastor Reginald Jackson of St. Matthew’s AME Church in Orange, who’s in consultation with the former councilwoman, stripped of office in 2008 on a judicial ruling that she crossed the line of propriety in advocating for her nephew during a traffic stop by Rutgers University police in 2006.

“My hope is the former governor was not aware of the limitation in this order,” said Jackson. “We have to find out from former Gov. Corzine what his intention was. I’m hoping it wasn’t his intention. If it was, we will have to examine other options.”

One option, he said, would be discussing the matter with Gov. Chris Christie.

“We were so happy, and this is completely shutting the door,” Jackson said. “Hopefully we can correct this.”

The ban until 2014 would obviously put Rone outside the realm of the 2010 election cycle and Mayor Cory Booker’s reelection context.

Booker, who once ran with Rone, has now teamed with Central Ward Councilman Charles Bell, Rone’s replacement in the Central Ward. 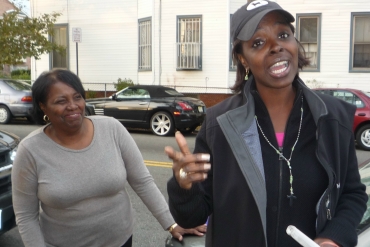