NEWARK – On the day Gov. Chris Christie took the oath of office, U.S. Rep. Steve Rothman (D-Fair Lawn) ruled out running against him.

“Yes,” he told PolitickerNJ.com when asked if he had eliminated the possibility of challenging Christie in 2013.

“I was a local mayor, county surrogate and judge and now I am a congressman focusing on national and international issues,” said the congressman. “My concern will be in one office or another in Washington, D.C.”

He was the first congressman in New Jersey to back President Barack Obama, a loyal retainer from nearly the beginning, and Rothman still staunchly believes in the chief executive – a smart and cool under pressure president, in his view – despite Democrats eating a hard loss tonight in Massachusetts with the defeat of Attorney General Martha Coakley by GOP state Sen. Scott Brown.

Obama campaigned for Coakely with a rally on Sunday, just as he swung into New Jersey for an 11th hour effort on behalf of loser and former Gov. Jon Corzine, who in his farewell address to New Jersey a week ago paid special tribute to the late U.S. Sen. Edward Kennedy, for whose vacant seat Brown tonight battled and beat Coakley.

“We’ll learn more about what motivated the Massachusetts voters when we learn about the exit polls,” Rothman said, “but above all, it is the way the respective candidates connected or failed to connect with the voters in a special election. Above all it is a referendum on the respective candidates running for the senate and that is the overwhelming factor. Martha Coakley was a successful attorney general with qualities one looks for in an attorney general but may not look for in a U.S. senator, especially in tough economic times.”

But he didn’t dismiss altogether the immediate blowback Obama’s suffering at the end of his first year in office.

“Presidents who turn out to be very popular, who put together productive and successful agendas – Ronald Reagan had poll numbers at the end of first term of office similar to obama’s – may not be popular early,” said the congressman, as they drive change.

“While there may be those energized to oppose Barack Obama’s agenda, I truly believe the margin of victory or defeat will be determined by the candidates, just as in New Jersey,” said Rothman, when the outcome of tonight’s race was still in question.

In Corzine’s case, “I think clearly there was a combination of factors. I don’t think the governor’s accomplishments were communicated as effectively as possible, but in the end it may not made the difference against a candidate with a nice personality and stellar record as U.S. Attorney.”

Rothman said he spoke to Sen. Bob Menendez (D-Hoboken) at Christie’s swearing-in, shortly before they parted company: Rothman bound for Washington and Menendez, chair of the Senatorial Campaign Committee, headed for Massachusetts to try to shore up Coakley fast sagging campaign.

“I don’t see it as a referendum on the first year of the president’s first term,” said Rothman.

As for Christie’s War Memorial oratory, “It was excellent and his offer to work with the Democratic majorities in both houses was appropriate given the democratic majorities that exist in both houses. Whether the pledge will bear fruit, only time will tell. I wish the governor every good, and I stand ready to help him, as I’ve told him, including when we spoke today.” 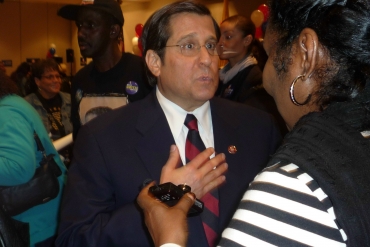