TRENTON – If not much money, low name ID and little strategic toehold candidate Eric Jackson knows he has an uphill battle in his bid for mayor, he can also tell voters that along the way the road will at least be paved and snow-shoveled and handled by someone who knows the terrain as a lifelong Trentonian.

The decade-long director of the city’s Department of Public Works doesn’t have the name recognition of Council President Paul Pintella or former Mercer County Freeholder Tony Mack, for example – but he’s committed to getting out there and working the wards.

“Folks don’t see my name everyday, but they see the benefit of the work I do,” Jackson told PolitickerNJ.com, arguably little consolation with a long sprint to May 11th, even as one competitor griped off the record that Trenton doesn’t look good enough to give Jackson bragging rights for his work at DPW.

“I would agree that we’re not where we want to be, but we’ve come a long way,” countered the director of a department numbering just under 400 non-uniformed employees on an annual operating budget of $30 million.

“The city was paving three city blocks a year with state grants. Now we pave under 55-70 streets every year in a cost-effective manner. …We’ve purchased equipment to pave our own streets and we’ve made tremendous strides in repairing potholes in the city. Our water rates are one of the lowest in the region.”

Although the mayoral candidate from Euclid Avenue comes out of the East Ward, not as voter-dense as the West or North, the geographical challenge has him ginned up to do that much more door-to-door campaigning, he insisted.

“One of the things I have to continue to do is go out and talk to folks and have coffee klatches and meetings in people’s homes to hear from them what they would expect from their leadership,” Jackson said. “I have been talking to people, listening to them, and I think it’s been working well.”

Jackson denied he’s had discussions with power brokers or area politicians about backing for his fledgling candidacy, which he launched on Dec. 14th of last year.

“I’m hopeful for the support of everyone in this city, and I’ve solicited support from north, south, east and west,” said the family man and member of Calvary Missionary Baptist Church. “I want what’s best for the citizens of Trenton. My heart is here for the people of Trenton, in this city I’m happy to call home. I haven’t heard anything about anyone supporting me. My focus is on the City of Trenton. Certainly, I would appreciate anybody’s support I can get.”

That includes the support of District 15 legislators – and Gov. Chris Christie.

“I’m reaching out to him (Christie) as we speak with the understanding that he just got sworn in and he’s in the capital city of New Jersey,” said Jackson. “My interest is how we can do things to make our capital seat one of the best. Would I seek his support? Yes, I want everybody’s support. I’m a Democrat, but ultimately the party I support is the party that says how we can work together. The slogan for my campaign, and it’s not just a slogan, is ‘Together we can make a difference.’ My backbone is how we can do that together; how I can be a servant leader, so I would welcome the governor’s support.”
Jackson also would appreciate the support of retiring Mayor Douglas Palmer.
“Overall, I would suggest to anybody who says otherwise, I been here most of my life – all of my life with the exception of a short time – and Trenton has come a long way in 20 years,” said the candidate. “Mayor Doug Palmer’s done some great things over the course of his time -but 20 years is a long time. And now it’s time for an era for new leadership. Without a doubt there’s been a disconnect more recently between city government and the residents and private sector business leaders. The challenge for me has to be, ‘How does this proposal work to make the City of Trenton better, and to foster more integration to make this city and the business owners better.'”

Up against a standing structural budget deficit and debilitated by 50% of the properties here exempt from taxation, Trenton must create ratables, said Jackson – a priority, he explains, in addition to improving schools and reducing crime and gangs.

Part of Jackson’s sales pitch is his private sector experience prior to arriving in city government in 1994. He served as director of operations and personnel for the Henry J. Austin Health Center, where he managed daily operations of a facility serving the medical needs of the under-insured and non-insured. In seven years as audit manager with Citibank, N.A. he was the audit review manager, supervising a staff of 18 professionals in the Eastern Division.

“My mom was a staunch believer in excellence and helping other folks along the way,” said Jackson. “At school, we had to do the very best we could. I grew up locally involved in the church at a very early age. I want to be mayor because I  want Trentonians to be proud of being from here. I’m excited to be called a Trentonian.” 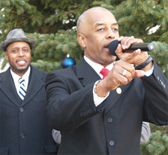