“That’s what Democratic Party turnout should be in Hudson County in a non-presidential election year,” he said, reaching for another cup of coffee.

In the 2009 gubernatorial election, then-Gov. Jon Corzine mustered 82,075 Hudson votes on his way to statewide defeat, a respectable  figure relative to Hudson County’s own U.S. Sen. Bob Menendez’s vote total of 88,696 in 2006, but unacceptable, in Stack’s opinion, when considering Republican turnout in Ocean and Monmouth counties last year for Gov. Chris Christie and the potential for Christie to mobilize more GOP voters.

“Unacceptable, when you think about what organizing can get you,” insisted Stack, generally regarded here as the fierce master architect of old school, constituent-based politics, whose longtime rep is that he’d rather drill down repeatedly into his own base than climb, who famously destroyed the Hudson County Democratic Organization (HCDO) with his 2007 state senate campaign.

Significantly, national Menendez, too, considers the numbers worrisome as he reels from Christie’s win, and Scott Brown’s GOP impact victory in the Massachusetts U.S. Senate race two weeks ago – larger landscape losses for the Democrat and chair of the Democratic Senatorial Campaign Committee, which now put that much more pressure on his home county to produce overwhelming results when Menendez runs for reelection in 2012.

That’s why it looks as though Menendez wants his hometown successor Stack to run the HCDO, a choice, which given Stack’s renegade history – including past clashes with Menendez – has the potential to create short-term political strife – but long-term results, if the mayor and 33rd district senator’s bottom line campaign history is any indication.

“I’m considering it right now,” Stack told PolitickerNJ.com. “I haven’t made up my mind totally right now. I would want to do the job my way, but I also wouldn’t go into towns and dictate how mayors run their operations. There are also personal decisions about the time commitment. And, of course, I would have to make sure it doesn’t interfere with what I do right now.”

“I don’t think it’s just the old school method that needs to be applied,” said Stack, decade-long mayor of this city of over 65,000, including a mix of Cubans, Dominicans, Puerto Ricans, Salvadorans and whites. “It’s old school and new school combined. The point is, right now, neither is being used by the HCDO. The direction of the party right now is not up, it’s down. The party benefits a few people on the personnel level, but doesn’t affect the people – the hard working blue collar working people, whites and African Americans and Hispanics and others in this county. Those are the forgotten ones. The HCDO doesn’t produce anything for them. We need what it says on my card, ‘Call me anytime, not only election time.'”

In tandem since 2000, Stack and Menendez had been on opposite sides of political fracases before, including in 1998 when Stack ran for mayor against Rudy Garcia. Backed by then-Congressman Menendez, Garcia won the election – then turned to Stack and said he didn’t really want to be mayor.

“You just ran for this. What are you talking about? You won the election,” Stack told Garcia.

Garcia told Stack that Stack was better suited to be mayor, and when Stack pressed for Garcia’s angle, the new mayor told him he wanted to be the congressman, and that if he and Stack teamed up they could both get what they wanted.

In a coup, Menendez would be the odd man out. However, instead of targeting the congressman, Stack joined forces with Menendez and dumped Garcia in 2000. The former mayor was not available for comment, but Garcia’s allies strongly dispute that interpretation of events and said he was never interested in being the congressman.

To that point of their careers, their temperaments were probably too similar and Union City too cramped to mostly make them anything other than ringleaders of their separate political organizations and party allies of convenience jockeying for position with the late Mayor Bruce Walter between them. Their ages created a gulf, with Menendez too old to be a brother and too young to be a father to Stack.

But the tough Union City up-and-comers shared beginnings as proteges of the late Mayor William Musto, a WWII combat veteran and party builder with a vision for a unified Hudson City instead of county, who also had a penchant for flattening political opponents and finally went down on federal racketeering charges.

“Don’t ever do anything politically outside the family until you talk to me,” Musto once told Stack, who used to run to campaign headquarters the way other kids his age ran to football practice.

The old mayor also counted Menendez a son – until the moment the kid took the stand and testified against him in his 1982 federal corruption trial, which guaranteed Musto a trip to a federal pen in Sandstone, Minnesota – but not before he defeated Menendez, overcoming an Election Day sentencing headline and that same night yelling back triumphantly to a charged up crowd at campaign headquarters, “You are my jury!”

His wife, Rhyta, assumed Musto’s vacant commissioner’s seat when he headed for the pen.

Asked about Menendez and Stack, Musto this week told PolitickerNJ.com, “Both of them are hard workers, and very ambitious, that’s all I can say.”

Veterans of politics in this North Jersey Democratic Party stronghold say the Musto model of old school politics was not unique to Musto. At one time, every town in Hudson was like Union City, and neighboring North Bergen, which Mayor Nick Sacco runs in similar fashion.

“His critics would call it bread and circuses and his advocates would call it taking care of people in need,” said a Hudson County source. “It’s that back-to-basics helping people with volunteers, serving a demographic that is forgotten, which he’s managed to capture and serve, and, of course, they love him. Historically, that’s what the Democratic Party should be about.”

For the record, the same federal investigation that spat out a number of HCDO street operatives also produced a guilty plea from Shimon Haber, a Brooklyn developer who admitted giving a contribution to Union City charity Gmach Shefa Chaim, which in turn channeled the money to a local official, allegedly in exchange for development approvals. Stack’s lawyer Dennis McAlevy told the Jersey Journal the mayor had no contact with Haber or confidential witness Solomon Dwek and called allegations of promises “ludicrous.”

Notwithstanding criticisms of Stack’s iron grip tendencies, accusations of Lenin-like leadership during the 2007 campaign and the occasional Hail Mary comparison to Stalin, Maurice Fitzgibbons, former chairman of the Hudson County Board of Chosen Freeholders, said Stack’s updated Musto model, as Menendez’s ddid when he served as mayor and later, as HCDO chairman, combines discipline, organization and aggressive constituent services.

“Right now, we need someone who can give us respect – inside and outside the county, someone who knows how to put an organization together,” said Fitzgibbons. “Who better than Brian Stack?”

Sources who as recently as a month ago said Stack couldn’t become the HCDO chairman now say there’s no doubt he’s the frontrunner – in part owing to a promise he made Sacco that if he becomes chair he would leave Sacco’s 32nd District alone, add those same sources – but despite Menendez’s undeniable position here as inveterate power player, the Union City mayor’s path to the chairmanship of Hudson’s 12 towns is not a done deal.

“One thing that would have to be looked at is Brian’s temperament,” said one Hudson County source “He’s been in so many wars – he’s a polarizing figure. A chairman does not fight. A chairman negotiates peaceful solutions to problems and brings people together. But Brian’s had bruising headlines for ten years, and the fact is he still gets big pluralities on election day.”

Hudson County Executive Thomas DeGise intends to seek reelection in 2011. His inner sanctum operatives don’t want a Juan Peron like Stack running the organization and potentially making DeGise’s life miserable, which in a worst case scenario would include watching their boss get thrown off the line. Stack said it doesn’t have to be that way, but DeGise has on at least one occasion suggested first term Bayonne Mayor Mark Smith as a consensus HCDO candidate for chairman.

“Brian has an election this year,” said DeGise, referring to Stack’s May nonpartisan reelection bid for mayor.

“So does Mark Smith,” Stack pointed out.

Not commenting on a law suit filed last week by prospective opponent Frank Scarafile claiming Stack broke up one of his political meetings and, upon observing what Stack considered slanderous campaign literature, shouted to cops, “Arrest them!”, the mayor said, “You take every election seriously.”

A few of Stack’s allies huddled around the table in the Four Star Diner laughed at the notion of Scarafile – crushed 6-1 by Stack in 2006 – as a threat.

“Every… election… seriously,” he repeated.

He recounted a recent example, by way of illustrating his designs on winning again in May – by way of amplifying the unrelenting, 24-7 approach he said he would take Hudsonwide if he becomes the party chairman.

Few outside of Perth Amboy saw veteran Mayor Joe Vas falling to political neophyte and bank teller Wilda Diaz in 2008, but Stack on a visit to the Middlesex bay town a few weeks before Election Day thought he saw the fight coming.

“I think you’ve got a problem there,” Stack told Vas on the floor of the Assembly shortly before Diaz buried Vas.

“Are you kidding me? Come on. That’s token opposition.”

“You have to take every challenge seriously.”

That same attitude propelled Menendez from Bergenline to the U.S. Senate, and now, say sources, has him doubling back to the beginning in search of the best political foundation for survival’s sake, as Stack discerns his own larger part in the fight, still inevitably from the vantage point of this Union City diner on most nights. 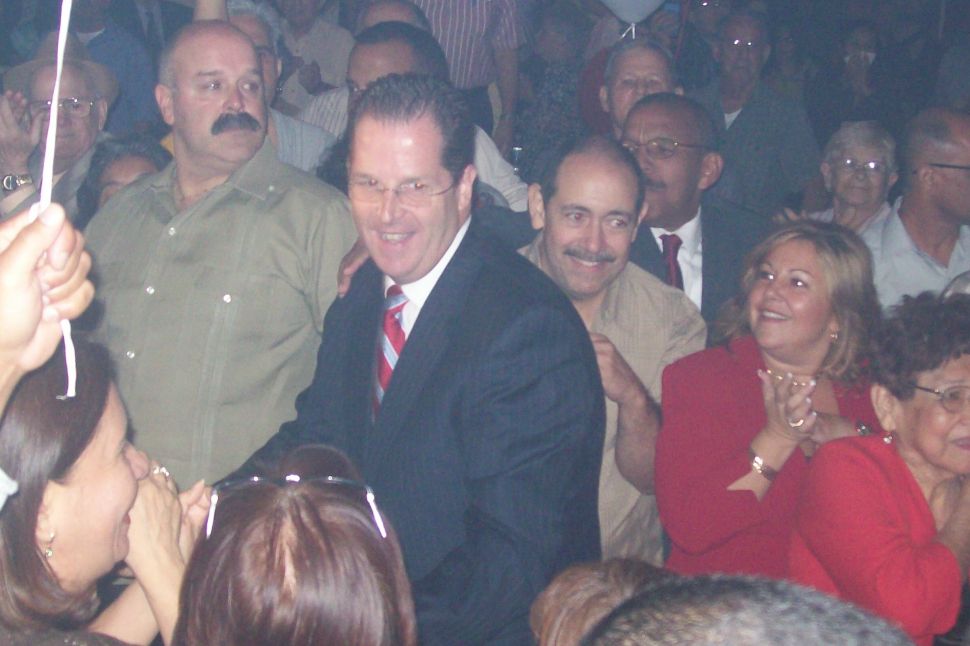