Trenton Mayor Doug Palmer prepares to leave office with no successor ready to effortlessly inherit the 20-year boots he leaves behind. In such a vacuum, as many as 11 candidates clamor for the right to succeed him, as his coming absence also creates the opportunity beyond the street level contest, for new power brokers to play in a city Palmer ran for five successive terms.

Ultimately, who becomes mayor of New Jersey’s capital will impact not only local politics, but conceivably create a power projection platform for the 2011 election in the 15th Legislative District, where state Sen. Shirley Turner (D-Lawrenceville) and Assemblyman Reed Gusciora (D-Princeton) have run afoul of George Norcross III and state Sen. Ray Lesniak (D-Elizabeth) and set up the prospect of a power-boss infused new mayor to run against the pair of longtime Mercer County Democratic Party standard bearers.

Essentially toothless between the power squeeze of North and South Jersey – and with neighboring Middlesex absorbing the consolation prizes of state party chair and senate majority leader for Central Jersey – the political no man’s land demarcations of Mercer County stand even more starkly now in Trenton. As Palmer leaves, who will succeed him as mayor also begs the question: who will be the power behind the mayor?

Sources say the power brokers have poked around Palmer to determine if he would be interested in running against Turner.

Contacted today on that question, the mayor wouldn’t deny it’s true, and ducked the point blank query about whether he would do it with a hasty, “Right now, I’m just concentrating on these last few months in office.”

Neither will the mayor publicly back anyone for mayor, although sources say he’s eyeballing – at least – the candidacies of Council President Paul Pintella and Department of Public Works Director Eric Jackson.

In a city that’s 52% African American, 32% white, and 21% Latino, most observers believe that whichever black candidate makes the runoff after surviving a field of mostly African American candidates who otherwise cancel one another out, will win the election.

Grassroots blacks like Mack and benAvraham run the risk of drilling into each other’s bases and defeating each other.

“I’m going to have to pull it out in the first shot,” admits Segura, a Palmer ally turned fierce foe and the only Latino in the race. “I’m solid in the diverse parts of this city. I’m confident that’s going to happen.”

In addition to whatever infrastructure Palmer hands over to his choice candidate, on the surface, labor, as usual in Mercer, looks like a factor.

But with key candidacies check-mating each other, labor support will come only hard won, if at all.

Two black candidates with solid name recognition citywide, Pintella and Mack, also happen to have a history with the AFL-CIO, an affiliation that would give either man a substantial leg up but for the presence of the other. Since they’re both running, the powerful umbrella labor organization will likely stay in a neutral corner, according to sources. That leaves both men to court their respective unions: Pintella leaning on the Communications Workers of America (CWA) and Mack looking for the intervention of the American Federation of State, County and Municipal Employees (AFSCME).

But Mack has been unaffiliated with the AFSCME local for some time.

Working to get his local name ID up to the level of Mack – who ran for mayor against Palmer, and Pintella, 16 years on the city council – Hamilton enters the race with the services of Jeff Meyer, a political operative whose umbilical cord for years – until recently – ran down to Camden County.

Now, the street knock on Hamilton is that for most of his adult life he lived in neighboring Hamilton Township, as opposed to Trenton, where he wants to be mayor, a fact coincidentally – and unfortunately, in a short time-frame election – amplified by his surname, but Meyer says, “He will be a very serious candidate.”

Whether Norcross or his organization decides to commit to Hamilton or anyone else may not come until very late in the game or even in a runoff, at which time the best primed candidate may receive the temptation of a late and essential power infusion in exchange in part for the promise to offer a stronger foothold for Norcross in the 15th District to go after Turner and Gusciora as retribution for the latter’s independence and expendability and the former’s ties to beaten Senate President Richard Codey (D-Roseland) and expendability.

But Norcross may not be alone in attempting to expand his empire, as Union County power broker Lesniak – not as strong as he was in the 1990’s – may also want to flex southward, creating potential for a modern reenactment of the Battle of Trenton more in sync with New Jersey politics than the solemn War Memorial invocations of Gov. Chris Christie or the charged up campaign rhetoric of Newark Mayor Cory Booker.

For unless they work in tandem, not out of the question given their recent alliance, the mayor’s race here could, in fact, turn crassly into a raw battle between Norcross and Lesniak for the heart of Trenton.

Pragmatically motivated by legal contract work, Lesniak carries the added idealistic incentive of political payback, coming off a tearful lame duck plea to fellow senators to support marriage equality, a measure Democrats aided Republicans in sinking in part with the help of Turner.

From a machine standpoint, Turner’s vulnerable.

Candidates already proclaim the need for Trenton’s independence from the shackles of state and a return to honoring the city’s slogan, “Trenton makes, the world takes,” even as external forces gather now early, 15 weeks out.

Mostly no-names line up to compete.

“Candidates in this race are going to have to have interaction with the residents,” said Palmer. “Blogs, emails, name in the paper, all that’s fine, but in a race like this, these individuals need to acquaint themselves with the citizens as a candidate for mayor. They really need to have interaction with people, which will require them to have coffee klatches so they can articulate the clear issues of being mayor and what we need to continue do to move this city forward.”

Absent 11 completely independent candidates, part of that process will feed the party power structures, to south and north.

“Trenton,” observed one party insider, “is up for grabs.” 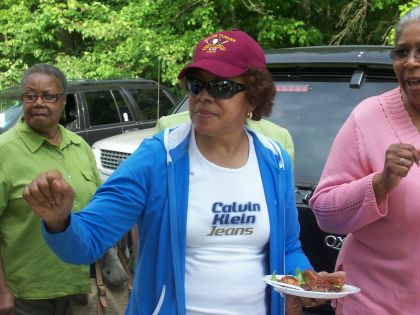