TRENTON — About 200 marriage equality proponents rallied in front of the Statehouse this morning as they prepared to watch same-sex marriage legislation come up for a vote in the full senate.

Supporters sang folk songs, including “This Little Light of Mine,” as they marched the couple hundreds yards between the Statehouse entrance and the annex next door.

Speeches were kept short, but Garden State Equality Chairman Steven Goldstein had a notable exchange with opponent Pastor Darren Johnson, who held a sign that read “’No gay marriage’ – God!”

Goldstein, holding a bullhorn, invited Johnson, who was alone, to stand next to him.

“This gentleman has the full constitutional right… and he has a big crowd behind him, too,” said Goldstein.

“I’m exercising my right- — my 14th amendment right – to dialogue intelligently for the issues,” said Johnson, who identified himself as a pastor but declined to identify what, if any, church he is affiliated with.

Wyatt Cenac, a correspondent for “The Daily Show” — a satirical news program on Comedy Central —  watched from the edges of the rally and pulled attendants, including Johnson, aside for interviews.

Inside, supporters and opponents rubbed shoulders as they lined up for hours to watch the vote from the senate gallery, which can only accommodate about 100 spectators.  The first two people in line — Ben Svendsen, an 19-year-old volunteer with the New Jersey Family Council, which opposes gay marriage, and Paul Didio, an 18-year-old high school senior who volunteers for Garden State Equality – arrived at 9am and planned to wait until the senate gallery opened at 1pm. 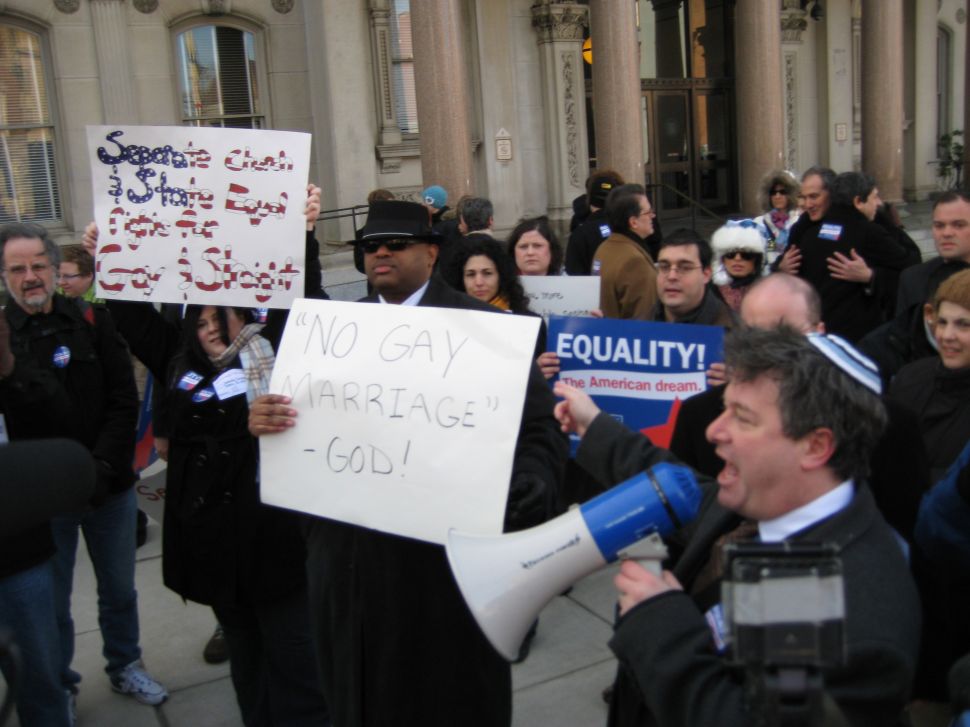